The Best Fifty Web Sites You Don't Know About 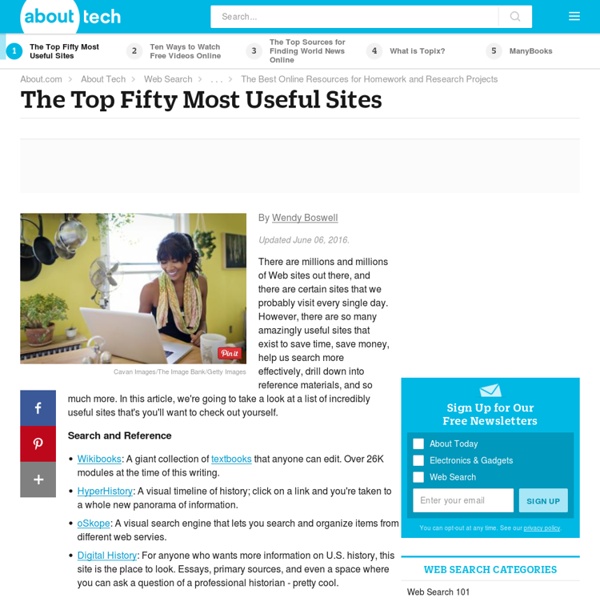 There are millions and millions of Web sites out there. Unfortunately, there are many Web sites that go under many searcher's radar. Some of these sites might be familiar to you, others not so familiar, but all are worth taking a look. Search and Reference Wikibooks: A giant collection of textbooks that anyone can edit. Over 26K modules at the time of this writing. Reading and Writing Project Gutenberg: A huge database of free downloadable books - I get a lot of my books from this collection. Entertainment and Video YOuConvertIt: Upload any media format and change it into another media format absolutely for free - and without installing any kind of software. Web Applications and Tools Mint: Free and automatic money management - a great way to be on top of your finances. Health and Lifestyle The Daily Plate: Track what you're eating and how much you're exercising; you can also get free recipes and weight loss tips here. Shopping and Travel Music and Multimedia News and Information Fun and Games

The Inquisitr News Both Jade Roper and Carly Waddell are happy for Chris Soules. As The ... South African rapper Flabba died on Monday at his home in South Africa. His ... Is Carmen Dickman’s face tattooed on Jax Taylor’s arm? According ... Great Alternatives Search Engines That Are Unknown to Many Other than the big four: Google, Yahoo, MSN and Ask, how many search engines do you know? One? Two? Five? Or Ten?

The Inquisitr News A mom crashed her car while taking a cell phone video of her children in the ... For every cute, playful puppy, there’s a cat that just wants to see ... After two hours, firemen in California rescued a naked woman stuck in a ... A Wisconsin ice cream company went viral on Tuesday when a picture of its work van was posted on Reddit. Perhaps the most intriguing part of the picture is the lengthy advertisement that is placed on the side of the work van. Chocolate Shoppe Ice Cream could have followed in the footsteps of many other… Read more »

Best Websites For Free PC Games Download 2017 Edition: Games are a great option for some hard-core entertainment and for timepass, but the prices of such awesome games are reaching sky levels nowadays. You need to spend at least 50$ to get a game which has a good storyline, graphics, and stunning gameplay. Some games even cost more than 100$; I’m very much sure that the prices will go further in the upcoming years. There are Many people can’t afford such expensive games, so we’ve decided to make a list Top 10 Best Websites Free PC Games Download in 2017, we have verified these websites; you can download games from these websites without hesitating. 50 Cool and Creative Products by Fred & Friends Yesterday I was listening to Supersci, and there was a part talking about how humans always move forward – forward to the better world. While it sounded somehow funny that day, it was probably true! I came across this incredibly innovative Fred and Friends shop (also check Amazon), and it proved the proposition from the song.

101 Free Admin Tools We know administrators love tools that make life easier – especially when they’re free! So here are 101 of them! System and network analysis 1. NTFS Permissions Explorer Using this MMC snap-in you can quickly visualize the user and group permissions of a local or remote folder or drive in a hierarchical format to help identify problems. The Eternal Idea of Revolutionary Justice Resurgence is in the wind. The cynicism that has dogged every gesture of our resistance is giving way as the disappointment of 20th century communism is eclipsed by the rebellious will to try again. Guiding this radical revival are two philosophers whose political theories breathe new life into the revolutionary project. We speak of Alain Badiou and Slavoj Žižek, a neo-Platonist-Maoist and a post-Lacanian-Leninist, whose carefully considered political philosophy revives the ideals of egalitarian-communism and heralds revolution in our lifetime. Their project is philosophically grounded in Badiou’s two-part magnum opus Being and Event and Logics of Worlds.

Best Places to Get Free Books – The Ultimate Guide When we were reviewing 10 of the best online resources for free books, we had a LOT of readers chime in with their own favorites as well. Thank you for all your helpful contributions! In fact, we had so many suggestions, we have enough to compile a huge list from them, so here they are in no particular order: Nate Hagens: The End of Growth Nate Hagens: The End of Growth length: 50:49 credit: ontheearthproduction Energy Hub, WUD Society and Politics Committee, and Madison Peak Oil Group host energy/finance expert Nate Hagens for a presentation that weaves together economics, anthropology, psychology, finance, trade, energy and human behavior into a coherent story about our human social system. In a visual synthesis using pictures and paintings instead of charts and graphs, Nate uses biophysical first principles to explain how our human economy really works, and how we achieved enormous success over the past two hundred years. But the underlying drivers of our economic juggernaut; cheap energy and resources, and an unconstrained natural environment, and increasingly, credit and debt, are unlikely to be available to continue a growth trajectory.