The Men Who Wear Many Hats 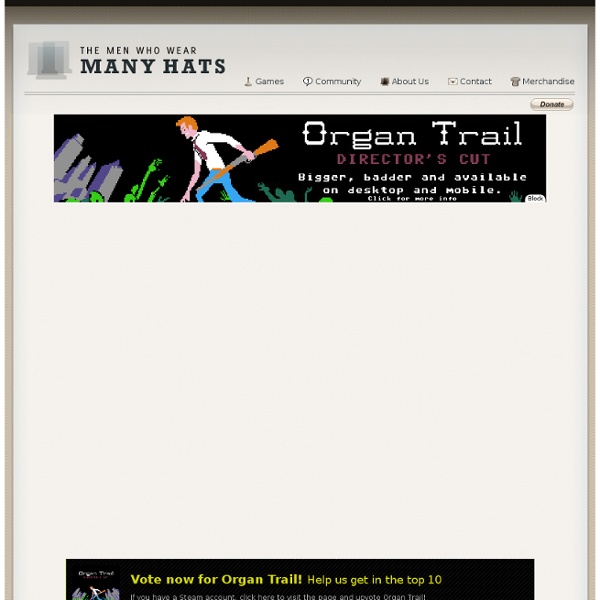 Mediocrity Mediocrity was invented as a game by Douglas Hofstadter and published in his book Metamagical Themas: Questing for the Essence of Mind and Pattern. In its original form, it is simply a guessing game, similar to Rock, Paper, Scissors, but a rather cerebral version. By playing with some friends, I (Greg Weidman) have assembled rules that make for a simple, hilarious card game for 3 or 4 players. For the theoretically-minded among you, this is a level-3 mediocrity game. Grant Robinson : Guess-the-google UPDATE: Guess-the-google is temporarily offline for maintenance. Hopefully back online soon. About the game

Cyberformance Cyberformance refers to live theatrical performances in which remote participants are enabled to work together in real time through the medium of the internet, employing technologies such as chat applications or purpose-built, multiuser, real-time collaborative software (for example, UpStage, Visitors Studio, the Waterwheel Tap and other platforms). Cyberformance is also known as online performance, networked performance, telematic performance, and digital theatre; there is as yet no consensus on which term should be preferred, but cyberformance has the advantage of compactness. For example, it is commonly employed by users of the UpStage platform to designate a special type of Performance art activity taking place in a cyber-artistic environment. History and context[edit] The Hamnet Players. Founded by Stuart Harris, this group performed in IRC; their earliest performance was "Hamnet" in 1993.[5]The Plaintext Players.

100 Things Personality Test - VisualDNA VisualDNA brings a new layer of information to the world of technology that will help bring it closer to the people who use it – making it more enjoyable and relevant. Technology provides businesses with a surfeit of DATA – what and when. However it provides very little in the way of UNDERSTANDING – who did things, and why they did them. We see this effect in all areas of business from marketing to financial services. Despite all the targeting and site metrics, digital marketing isn’t getting any more effective. John Conway's Game of Life The Game The Game of Life is not your typical computer game. It is a 'cellular automaton', and was invented by Cambridge mathematician John Conway. This game became widely known when it was mentioned in an article published by Scientific American in 1970.

dont they have an updated verison of this somewhere ? by miccheck79 Nov 15

they were better days back then by elwood Nov 10