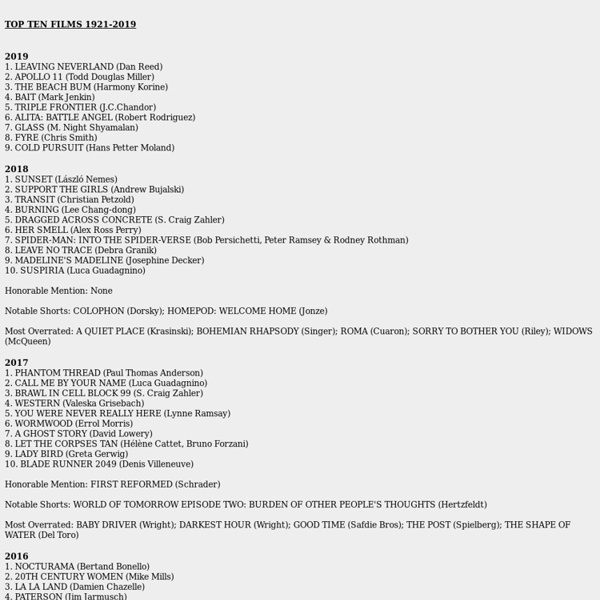 Top 100 Tuesday: 100 Best Movies of the Decade EmailEmail Since we first published our 100 Best Movies of the Decade in 2009, films have continued to get bigger and better. Here’s an update to the original list. Here’s what we originally wrote five years ago. We are leaving Kubrick behind and fast approaching Hyams. If you get that reference, go grab yourself a cookie. 100 Best Comedy Movies - Film Here's the 100 best comedy movies as chosen by more than 200 people whose job it is to make you laugh. We spoke to dozens of comedy writers, comedy directors, comic actors and stand-up comedians – including Dan Aykroyd, Richard Curtis, Edgar Wright, Kim Noble, Stephen Merchant, Jo Brand and many, many more – and asked them to share with us their favourite comedy films of all time. Can you guess which film emerged as the number one choice? UPDATE: Tell us the comedy movie you think should have made the list and we'll print the best ten in a future issue of Time Out magazine.

Five Great Short Films Inside Longer Ones They’re like Russian dolls, but cinematic. by Rick Paulas There are plenty of perfect sequences in movies: masterfully edited moments that stand out from the rest of the larger work. Top 10 underappreciated kids movies from the last 20 years Before we get started, one note: I do appreciate that some films on this list earned a lot of critical acclaim, or pulled in a reasonable amount of cash. The point, though, is that these are the films that have been seemingly forgotten about. And that's a fate they simply don't deserve. Especially when kids keeping watching Shrek The Third, or tat like that on loop instead... 10.

www.empireonline.com - StumbleUpon From Brazil to Japan to France and Senegal, from Neo-Realism to Dogme to J-horror, we've compiled a list of the very best films not in the English language (note: features, not documentaries). So rustle up some sushi, strike up a gauloise and make sure you've locked your bicycle as we count down the top 100 world cinema movies... 100. Night Watch Year: 2004Country: RussiaDirector: Timur Bekmambetov

Cult Movies - Top 10 List - Top Ten List - Top 10 Films About Nonconformists - Nonconformity Quotes - Nonconformist Quotes - Nonconformists in Film - Barfly Top 10 Films About Nonconformists "This is a world where everybody's gotta do something. Ya know, somebody laid down this rule that everybody's gotta do something, they gotta be something. You know, a dentist, a glider pilot, a narc, a janitor, a preacher, all that . . . 50 Best Movies of 2010 Much has been debated about the quality of the top movies released this year, but that we were able to pull together a list of the 50 best movies of 2010 means it couldn't have been so bad after all. After the jump, we count down our favorite movies of the year, from the mind-bending 'Inception' to the movie that may have defined our generation, 'The Social Network.' Think you can figure out which movie topped our list? There's only one way to find out. - the Moviefone Editors, Dec. 21, 2010 50. 'Alice in Wonderland' What's with the hate, critics?

David Edelstein's 2011 Top 10 Films hide captionAt the heart of Hell and Back Again is 26-year-old Sgt. Nathan Harris (left). The documentary film — which won the Grand Jury Prize at the 2011 Sundance Film Festival — shows a wounded Harris' struggles with combat stress and addictive opiates after his return to the U.S. docuramafilms Fresh Air's film critic David Edelstein says 2011 was the kind of year without a list-topping film. "There's no best film this year," says Edelstein.

The 15 Best Miramax Films Today, the indie world and the film world at large lost a giant in the field, watching Disney close the doors and turn the lights off on Miramax. As sad a day like today is, and as uncertain as the future is, we can still hold on to the memories. Most of them are now on Blu-ray.