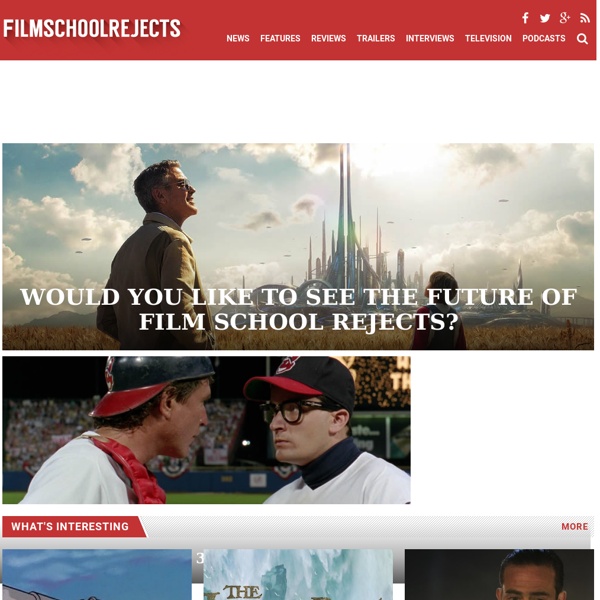 Josh Fortune Why Watch? As a potential upside, we could be uploading our consciousness into a computer to dominate our reality like Johnny Depp (or Ray Kurzweil). As a potential downside, we could be robo-slaves kept pliant by our addiction to an alternative version of reality. Either way, it all starts with Google Glass. This sharp and brooding short film from Josh Fortune was created for the Sci-Fi London 48 Hour Film Competition, and it tells a personal story within the confines of a future history and a metal chassis.

Get (Almost) Any Book For Free: 100+ (Kosher) Sites Offering Great Literature for Download By Tiffany Davis Reading a book is fun, but when you forget it at home, are bored at work, looking to get ahead on your reading for your online bachelor degree class, or are just curious to get a sneak peek at whatever you ordered from Amazon, online book sites can be handy too. Below is a list of over 100 free (and legal) sites to find great literature for download. The Classics Browse works by Mark Twain, Joseph Conrad and other famous authors here. TeneoHorror – The Top 10 Seriously Disturbing Horror Films The Teneo Horror Team bring you ‘in our very humble opinion’ the very sickest, weirdest, Top 10 Seriously Disturbing Horror Films of all time. Maybe it’s an idea to simply read the review but DO NOT Watch the video clips and certainly DO NOT WATCH the actual films… If you WATCH ALL 10 back to back, not recommended in any way… Then there is a very good chance you may not emerge from the other end as quite the same person.. Don’t say you haven’t been warned. Please note..

Using Social Media Creatively to Promote a Film Bryden McGrath (@Bryden13 on Twitter) wrote an excellent post entitled “44 Ways ‘The Hunger Games’ Social Media Campaign Increased the Movie’s Odds of Success.” He broke up the article by social media platform: Facebook, Google Plus, YouTube, Tumblr and Twitter with a note about the film’s success on Pinterest without an official account on the site. I agree with Bryden that some of the strategies are “nothing short of brilliant.” Especially interesting is the use of the novel’s characters and situations to create more fan involvement (Full disclosure: I have not read any of “The Hunger Games” trilogy. Ever since I read Stephen Walton’s 1967 dystopian novel “No Transfer” I can’t read novels about teens having to kill each other.

Anamorphic Sculptures London-based artist Jonty Hurwitz creates ‘Anamorphic Sculptures’ which only reveal themselves once facing a reflective cylinder. Hurwitz took an engineering degree in Johannesburg where he discovered the fine line between art and science. He has lived in England for many years, working in the online industry though he quietly levitated into the world of art inspired by a need to make ‘something real’. Hurwitz discovered that he could use science as an artistic paintbrush. Each of his sculptures is a study on the physics of how we perceive space and is the stroke of over 1 billion calculations and algorithms.

Tintin's Virtual Art You could say that Avatar set the stage for The Adventures of Tintin. The animated feature, directed by Steven Spielberg, features digital comic-book characters acting with the help of performances captured from actors using a process similar to one James Cameron developed for Avatar. Similarly, to help set the stage for the production and help Spielberg visualize the 3D world in which Tintin would act, virtual art department supervisor Robert Powers, now vice president of 3D development at NewTek, assembled a virtual art department, much as he had done for Avatar. (For an in-depth look at the digital magic used to create the characters and environments in Tintin, see “Animation Evolution” in the December 2011/January 2012 issue of CGW.)

12 Laws Of Karma That Will Transform Your Life You are actually governed by the laws of Karma, just as everything in the world is governed by the laws of Physics. You may not know it – or you may believe that your life is actually in your own hands. But these Karmic laws will govern your entire life. And instead of being afraid of some grey laws, it’s best to know them and be empowered by your knowledge instead! Blender 3D Design Course Blender 3D Design Course Note: Added new Lesson #13 - NURBS Surfaces / Meta Objects - April 27, 2013 Note: Added new Lesson #14 - Rigid Body Dynamics- June 1, 2013 Students: This course is also available for downloading to your iPhone or iPad via Tufts University iTunesU. (Install the iTunesU app / Search Colleges and Universities - Tufts University / Subscribe to "3D Design - Blender"). You can also download the course to a desktop or laptop via the iTunes application.

Director of Photography LIGHTING & CAMERA TIPS FOR FILM & TV Information for students of cinematography General lighting tips for beginners If you are just starting out with lighting, the best thing to do is find still images or scenes from a movie that you love - then work out how the lighting was done and try to recreate it. You're Bored? Are You Kidding Me? (Updated 11th August 2016). So…I saw your tweet. You’re “bored”? 125 Movies That Absolutely Every Man Should See Compiling a list of the 125 films every man must see was no easy task – personal favourites were discarded, profanity was rampant and it became abundantly clear exactly why nobody likes to see a grown man cry. But we did it – 125 masterful movies that everyone here at Fataldose could live with. The question is, can you?

Historical & Cultural Collections July 1971 Richard Neville This issue appears with the help of Jim Anderson, Pat Bell, Felix Dennis, Debbie Knight, Stephen Litster, Brian McCracken, Pearce Marchbank, Richard Neville, John O’Neil, Chris Rowley, David Wills. The Machine Stops - E. M. Forster The Machine Stops is a short science fiction story. It describes a world in which almost all humans have lost the ability to live on the surface of the Earth. Each individual lives in isolation in a 'cell', with all bodily and spiritual needs met by the omnipotent, global Machine. Most humans welcome this development, as they are skeptical and fearful of first-hand experience. People forget that humans created the Machine, and treat it as a mystical entity whose… (more) The Machine Stops is a short science fiction story.