Welcome to the United Nations 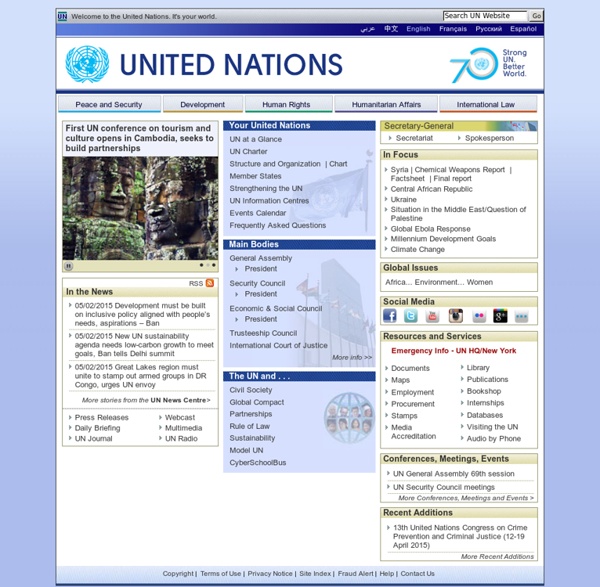 The World Factbook People from nearly every country share information with CIA, and new individuals contact us daily. If you have information you think might interest CIA due to our foreign intelligence collection mission, there are many ways to reach us. If you know of an imminent threat to a location inside the U.S., immediately contact your local law enforcement or FBI Field Office. For threats outside the U.S., contact CIA or go to a U.S. Global Governance Global governance or world governance is a social movement toward political integration of transnational actors aimed at solving problems that affect more than one state or region when there is no power of enforcing compliance. The modern question of world governance exists in the context of globalization. In response to the acceleration of interdependence on a worldwide scale, both between human societies and between humankind and the biosphere, the term "world governance" may also be used to designate laws, rules, or regulations intended for a global scale. Definition[edit]

Home Incidence of TB in Cattle, Great Britain - Data to January 2014 Release time: 9:30am Agriculture and Environment | Environment, Food and Rural Affairs | GB Latest national statistics bringing together various sources of statistics relating to the incidence of TB in Cattle, Great Britain according to arrangements approved by the UK Statistics Authority. Regional labour market statistics - April 2014 Enduring Voices Project, Endangered Languages, Map, Facts, Photos, Videos Explore Talking Dictionaries The Enduring Voices team is pleased to present these Talking Dictionaries, giving listeners around the world a chance to hear some of the most little-known sounds of human speech. Several communities are now offering the online record of their language to be shared by any interested person around the world. While you probably won't walk away from these Talking Dictionaries knowing how to speak a new language, you will encounter fascinating and beautiful sounds--forms of human speech you've never heard before--and through them, get a further glimpse into the rich diversity of culture and experience that humans have created in every part of the globe.

Print and Broadcast Media From Wikipedia, the free encyclopedia Media may refer to: Communications[edit] CELAC On Saturday, December 3 rd – while most of the U.S. media was focused on the political demise of Republican presidential candidate Herman Cain and the growing financial meltdown in Europe – the Community of Latin American and Caribbean States (CELAC) was officially launched at a summit in Caracas, Venezuela. The new regional organization includes every nation in the Western Hemisphere with the exception of the United States and Canada and is seen by many as a potential rival to the region’s foremost multilateral organization, the Washington-based Organization of American States (OAS). Though it generated a great deal of media attention within Latin America and was attended by the majority of the hemisphere’s heads of state, the U.S. press largely overlooked the Caracas summit with, for instance, the New York Times limiting its coverage to a brief 100 word blurb from the Associated Press. CELAC appears to be progressing along a track very similar to UNASUR.

Museological Complex of the Museum of Civilization It consists of a virtual exhibit of five historic periods from 1870 to today. A blog for teachers and their students introduces the concepts of science journalism. Discover the history of this fascinating place and observe vestiges of the past through five 360 degree panoramas. At the controls of your flying camera, free three museums that have lost their access code. Although little known until today, the epic tale of the first French North American colony has been gradually revealed in five years of archaeological work on the Cap-Rouge. An artistic marvel to explore, as works of the 15th and 16th European art schools are juxtaposed with those of such renowned Québec artists as Joseph Légaré, Marc-Aurèle de Foy Suzor-Coté, and Jean Paul Lemieux.

Fighting Against Apartheid: The Activism of Fatima Meer UN photo This lesson is an online supplement to the curriculum unit Freedom in Our Lifetime: South Africa's Struggle. Objectives