Violence: An American Tradition (Part 1 of 6) 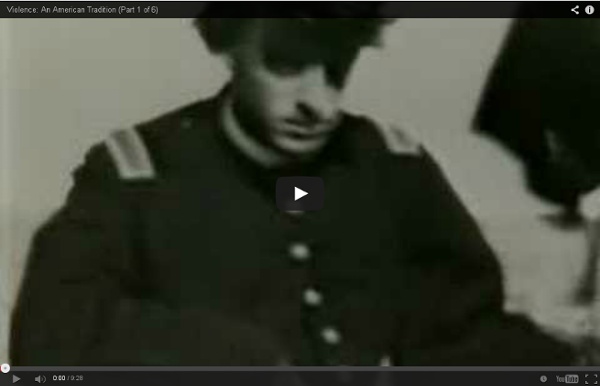 Who Rules America? Power, Politics, & Social Change by G. William Domhoff Welcome to WhoRulesAmerica.net, a site about how power is distributed and wielded in the United States. Among the many things you'll find here: supplementary information and updates for readers of WRA; an overview of the American power structure at the national level and an in-depth look at power at the local level; a look at the wealth and income distribution in the U.S.; and an overview of the Four Networks theory of power, which provides the best general theory of power and social change within which to situate the class-domination theory we've developed specifically for the United States. There's a special section (including photos and first-hand accounts) about a unique elite social club that's been holding its annual California summer retreat for well over a century: The Bohemian Club & The Bohemian Grove. Questions and Answers Q: So, who does rule America? Q: Do the same people rule at the local level that rule at the federal level? A: No, not quite.

The Crisis Of Civilization sneak a peek at these guys Crisis Of Civilization Aldeburgh Elevate Leeds Watch female impotence Share Subscribe Enter your email address to subscribe to this blog and receive notifications of new posts by email. Links Networking Please educate friends and help support this movie by sharing it. 2011 © Crisis Of Civilization. ALEC Exposed Progressive Policies Win at the Ballot Box Ballot measures across the country passed on November 8th highlighting the fact that progressive values still resonate with the U.S. electorate. Gains were made even in the face of industry deception and big dollar ad campaigns. In a victory for climate activists and solar energy, Floridians voted down Amendment 1, a constitutional amendment which would have made it hard for people with solar panels to sell energy back to the grid. Kochs Battle Dark Money Disclosure in South Dakota The Koch network mobilized in South Dakota to defeat the "South Dakota Accountability and Anti-Corruption Act," a state-wide initiative on the ballot November 8. The anti-corruption measure, Initiated Measure 22 or IM-22, was launched by a bipartisan group called the South Dakotans for Integrity and put on the ballot with signatures from over 20,000 state residents. Exxon and ALEC Running Illegal Lobbying Scheme, Watchdog Groups Charge in IRS Complaint