Beyond Orwellian Nightmares and Neoliberal Authoritarianism 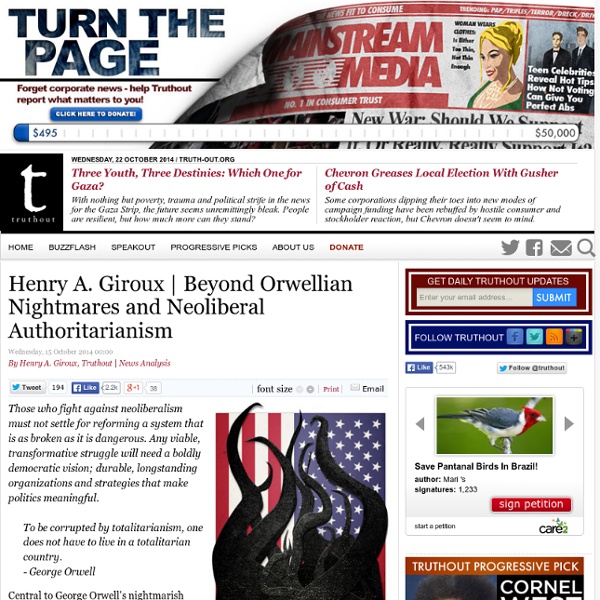 (Image: Jared Rodriguez / Truthout)Those who fight against neoliberalism must not settle for reforming a system that is as broken as it is dangerous. Any viable, transformative struggle will need a boldly democratic vision; durable, longstanding organizations and strategies that make politics meaningful. To be corrupted by totalitarianism, one does not have to live in a totalitarian country.- George Orwell Central to George Orwell's nightmarish vision of a totalitarian society was a government so powerful that it not only dominated all of the major institutions in a society, but it also was quite adept at making invisible its inner workings of power. To read more articles by Henry A. Giroux and other authors in the Public Intellectual Project, click here. The American Deep State, or what Colonel Fletcher Prouty called the Secret Team, is a structural layer of political intermediaries: non-governmental organizations (e.g.

The BRICS: Yash Tandon asks tough questions – which we all need to ponder Patrick Bond 2014-06-11, Issue 682 Printer friendly version cc EKPatrick Bond addresses questions raised by Yash Tandon in regards to the role of the BRICS in Africa and in the current configuration of the neoliberal international capitalist order. The challenge is for critics of BRICS to strategise with the world’s progressive forces to build a genuine anti-imperialist movement In his May 21 article, ‘On sub-imperialism and BRICS-bashing’, contesting what I think are the tendencies in the Brazil-Russia-India-China-South Africa nexus, Yash Tandon offers a chance to develop arguments further.

How the West Created the Islamic State President Barack Obama announces the Iraqi special forces, backed by American war planes, had retaken a strategically critical dam near Mosul, Iraq, from extremists of the Islamic State, at the White House, in Washington, August 18, 2014. (Photo: Doug Mills / The New York Times) Part 1: Our Terrorists “This is an organisation that has an apocalyptic, end-of-days strategic vision which will eventually have to be defeated,” Gen. Martin Dempsey, chairman of the US Joint Chiefs of Staff, told a Pentagon press conference in August.

Unethical Websites Or maybe the century. I guess it might be a parody. I hope it’s a parody. UPDATE (MAY 3): I have been convinced that this post went too far. Asking for support for Slager’s defense cannot be unethical: Slager has a right to a defense, and the best one available. On sub-imperialism and BRICS-bashing Yash Tandon 2014-05-21, Issue 679 Printer friendly version There are 2 comments on this article. cc PJCritics of the BRICS base their arguments on empirical observations.

AARC Public Library - Church Committee Reports Church Committee Reports These 14 published reports of the Church Committee contain a wealth of information on the formation, operation, and abuses of U.S. intelligence agencies. They were published in 1975 and 1976, after which recommendations for reform were debated in the Congress and in some cases carried out. The Interim Report documents the Church Committee's findings on U.S. involvement in attempts to assassinate foreign leaders, particularly Patrice Lumumba of the Congo, Cuba's Fidel Castro, Rafael Trujillo of the Dominican Republic, the Diem brothers of Vietnam, and General Rene Schneider of Chile. It also contains findings on the development of a general "Executive Action" capability by the CIA. The remaining reports are split into 7 volumes of public hearings and exhibits and 6 books which contain the Committee's writings on the various topics investigated.

I Bought a Rainforest Copyrighted image Credit: Charlie Hamilton James Wildlife photographer Charlie Hamilton James has just bought 100 acres of the Peruvian Amazon … without even looking at it first. He plans to spend a year photographing the animals on his land, before launching a campaign to protect more of the forest. But it turns out buying a piece of land over the phone isn’t such a great idea. Over three programmes Charlie discovers that the problems facing the Amazon are now all on his doorstep - the drug trade, illegal gold mining, logging and poverty.

BRICS and the tendency to sub-imperialism Patrick Bond 2014-04-10, Issue 673 Printer friendly version The National Security Archive December 9, 2014 Torture Report Finally Released Senate Intelligence Committee Summary of CIA's Detention and Interrogation Program Concludes CIA Misled Itself, Congress, the President about Lack of Effectiveness. September 28, 2014 THE YELLOW BOOK Secret Salvadoran military document from the civil war era catalogued "enemies," many killed or disappeared. Pray and Fast for the Climate We’re a movement of Christians praying and fasting on the 1st of each month for a meaningful and just global climate agreement at the UN climate talks. We started off in the UK, but now include people from Australia, Canada, Europe and the US. And we hope to grow more – recently the Anglican Communion Bishops’ statement on the environment suggested that all Anglicans worldwide pray and fast on the 1st of the month! Pray and Fast for the Climate is supported by members of the ‘Faith for the Climate’ network, including: A Rocha UK, The Baptist Union, Christian Aid, Christian Concern for One World, Climate Stewards, Commitment for Life, Hope for the Future, Operation Noah, Our Voices, SPEAK, Tearfund, The Church of England and its Shrinking the Footprint Programme, The Methodist Church, The United Reformed Church, and Us.

The Future of the BRICS Development Bank by HORACE G. CAMPBELL At the end of the Sixth BRICS[1] Summit in Fortaleza, Brazil on July 16, 2014, the leaders of the BRICS countries announced the “Fortaleza Action Plan.” This plan is in the context of the Fortaleza Declaration, [i] where the leaders reinforced their position that BRICS would be an international force in challenging the neo-liberal policies of the Washington Consensus.

The Rise of Dark Tourism EIN ZIVAN, Golan Heights—Kobi Marom squints into the morning sun and gestures at the rolling green hills beneath the Quneitra viewpoint, where the crumbled Syrian city of Quneitra juts up against the Syrian-Israeli border fence. Here, some of the fiercest fighting of the Syrian civil war has played out over the past year. And every time there has been a battle, there has also been a crowd. On Dawkins The Protestant Atheism of Richard Dawkins Lourdes Dawkins starts his travels with a visit to Lourdes. At the end of the visit, he concludes, the hard fact is, over the years, with their millions of pilgrims, there have been 66 supposed miracles

Capitalism vs. Democracy Thomas Piketty’s new book, “Capital in the Twenty-First Century,” described by one French newspaper as a “a political and theoretical bulldozer,” defies left and right orthodoxy by arguing that worsening inequality is an inevitable outcome of free market capitalism. Piketty, a professor at the Paris School of Economics, does not stop there. He contends that capitalism’s inherent dynamic propels powerful forces that threaten democratic societies. War Report - Iraq and Afghan Wars - hundreds of sources and hundreds of current links, and thousands of items in archives This page was last updated in March 2009 and is archived. There are about 14,000 documents and articles on the wars in Iraq and Afghanistan listed and linked to here. For years to come this site should remain one the very best resource sites on these two wars. Some small percentage of the links on this site will go bad each year.