The Crisis Of Civilization 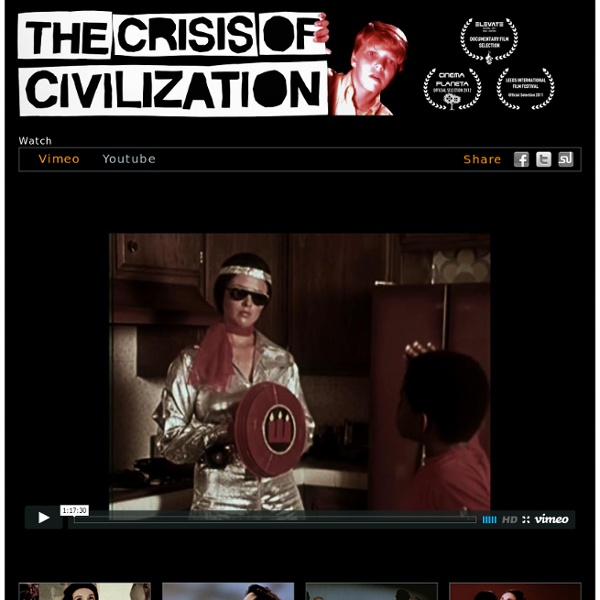 sneak a peek at these guys Crisis Of Civilization Aldeburgh Elevate Leeds Watch female impotence Share Subscribe Enter your email address to subscribe to this blog and receive notifications of new posts by email. Links Networking Please educate friends and help support this movie by sharing it. 2011 © Crisis Of Civilization. Related:  War & Peace

Welcome to the CIA Web Site — Central Intelligence Agency Silent Spring Summary Environmental Issues > Health Main Page > All Health Documents Although their role will probably always be less celebrated than wars, marches, riots or stormy political campaigns, it is books that have at times most powerfully influenced social change in American life. Thomas Paine's Common Sense galvanized radical sentiment in the early days of the American revolution; Uncle Tom's Cabin by Harriet Beecher Stowe roused Northern antipathy to slavery in the decade leading up to the Civil War; and Rachel Carson's Silent Spring, which in 1962 exposed the hazards of the pesticide DDT, eloquently questioned humanity's faith in technological progress and helped set the stage for the environmental movement. Carson, a renowned nature author and a former marine biologist with the U.S. "Things Go Out of Kilter" Carson was happiest writing about the strength and resilience of natural systems. DDT, the most powerful pesticide the world had ever known, exposed nature's vulnerability. Silent Spring

Home :: Veterans for Peace The Paradox of Wealth: Capitalism and Ecological Destruction John Bellamy Foster is editor of Monthly Review, professor of sociology at the University of Oregon, and author of The Ecological Revolution (Monthly Review Press, 2009). Brett Clark is assistant professor of sociology at North Carolina State University, and author (with John Bellamy Foster and Richard York) of Critique of Intelligent Design (Monthly Review Press, 2008). The core argument on the paradox of wealth here was first introduced in a paper by both authors, entitled “Marx’s Ecology in the Twenty-First Century,” presented by Clark at the International Symposium on Ecological Civilization, Sanya, Hainan, China, June 23, 2009. Subsequent versions were delivered by Foster at the Marxism 2009 conference, University of London, July 4, 2009, and the Political Economy of the World-System Miniconference, University of San Francisco, August 7, 2009. —The Editors This fatal flaw of received economics can be traced back to its conceptual foundations. The Lauderdale Paradox

Martin Luther King, "It's A Dark Day In Our Nation" Martin Luther King, "It's A Dark Day In Our Nation" Martin Luther King Jr.: "Why I Am Opposed to the War in Vietnam" Sermon at the Ebenezer Baptist Church on April 30, 1967 "I call on the young men of America who must make a choice today to take a stand on this issue. Click on "comments" below to read or post comments The sermon which I am preaching this morning in a sense is not the usual kind of sermon, but it is a sermon and an important subject, nevertheless, because the issue that I will be discussing today is one of the most controversial issues confronting our nation. Now, let me make it clear in the beginning, that I see this war as an unjust, evil, and futile war. The truth of these words is beyond doubt, but the mission to which they call us is a most difficult one. Polls reveal that almost fifteen million Americans explicitly oppose the war in Vietnam. Yes, we must stand, and we must speak. This sermon is not addressed to Hanoi, or to the National Liberation Front.

Rising Powers, Shrinking Planet | Michael T. Klare "Klare’s superb book explains, in haunting detail, the trends that will lead us into a series of dangerous traps unless we muster the will to transform the way we use energy."—Bill McKibben Oil recently hit $140 a barrel, and it is still climbing. Unlike the oil shocks of the 1970s, this dizzying leap is not the product of an OPEC embargo or a sudden flare-up in the Middle East. Now in paperback, Rising Powers, Shrinking Planet surveys the energy-driven dynamic that is reconfiguring the international landscape: Russia, the battered Cold War loser, is now the arrogant broker of Eurasian energy, and the United States, once the world’s superpower, must now compete with the emerging "Chindia" juggernaut for finite and diminishing resources.

Military Sociology Military sociology is the sociological study of the military. It examines issues such as military recruiting, race and gender representation in the military, combat, military families, military social organization, war and peace, and the military as welfare. Military sociology is a relatively minor subfield within the field sociology. Following are some of the issues studied under military sociology: The Basis of Service. Social Representation and Access. Sociology of Combat. Family Issues. The Military as Welfare. Social Organization. War and Peace. References Armor, D.J. (2010). Peak Oil: a brief introduction The Sociology of War - Sociology Introduction The sociology of war is a subfield of sociology that focuses primarily on the macrolevel patterns of war making, including how societies engage in warfare, the meaning that war has in society, and the relationship between state structure and war making. The sociology of war is strongly related to, although in many ways distinct from, the subfield of military sociology that focuses on the organization and functioning of military forces with a particular focus on military personnel and civil military relations. What binds these lines of scholarship together is the basic premise that to understand war, it is necessary to understand those who fight it, and vice versa. In addition to military sociology and military history, the sociology of war also overlaps with anthropology, political sociology, political science, and international relations, and is most strongly embedded within the field of comparative historical sociology. Classic Works Grotius, Hugo. 1962.

Revolution Green: A True Story of Biodiesel in America Terrorism: Perception Vs. Reality (UNC Spotlight) — Sociology UNC sociology professor Charles Kurzman specializes in Middle East and Islamic studies, but he knows his American history, too. “Muslims are the latest wave of immigrants who are associated with acts of violence and are thought to be disloyal or not fully American, who are thought by many people to be impossible to integrate into American society. It was the same for the Irish in the 1840s, for Germans from the 1860s through World War I and for Italians who early in 20th Century were associated with anarchism and socialism and for Japanese Americans after Pearl Harbor,” Kurzman said. Much of Kurzman’s recent work has been to compile statistical profiles of Muslim Americans that reveal the majority of Muslim Americans are not the demons that some politicians and pundits have made them appear after 9-11. "There have been a lot of losses, there’s a lot of mourning," Kurzman says when asked about 9-11 and the war on terror. About half of the would-be terrorists were U.S.