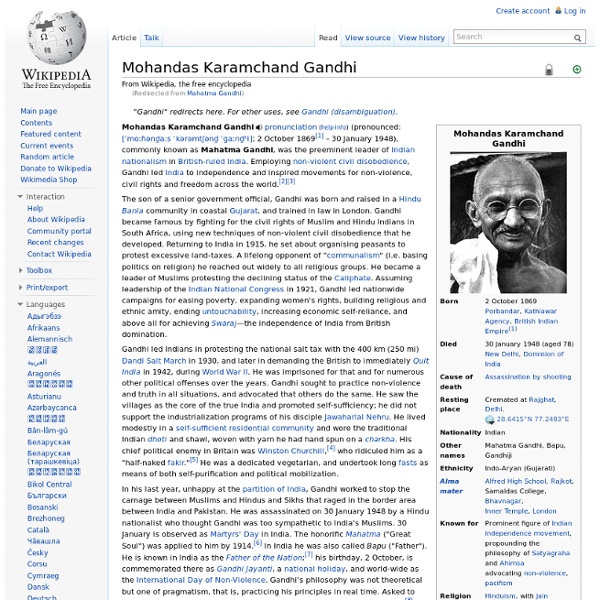 Mohandas Karamchand Gandhi (pronounced [ˈmoːɦənd̪aːs ˈkərəmtʃənd̪ ˈɡaːnd̪ʱi] ( ); 2 October 1869 – 30 January 1948) was the preeminent leader of Indian nationalism in British-ruled India. Employing nonviolent civil disobedience, Gandhi led India to independence and inspired movements for civil rights and freedom across the world. The honorific Mahatma (Sanskrit: "high-souled", "venerable"[2])—applied to him first in 1914 in South Africa,[3]—is now used worldwide. Gandhi famously led Indians in challenging the British-imposed salt tax with the 400 km (250 mi) Dandi Salt March in 1930, and later in calling for the British to Quit India in 1942. Gandhi is commonly, though not officially,[10] considered the Father of the Nation[11] in India. Early life and background Mohandas Karamchand Gandhi in his earliest known photo, aged 7, c. 1876 The Indian classics, especially the stories of Shravana and king Harishchandra, had a great impact on Gandhi in his childhood. English barrister Related:  gehan • Social change advocates

The Story of My Experiments with Truth The Story of My Experiments with Truth is the autobiography of Mohandas K. Gandhi, covering his life from early childhood through to 1921. It was written in weekly instalments and published in his journal Navjivan from 1925 to 1929. Its English translation also appeared in instalments in his other journal Young India.[1] It was initiated at the insistence of Swami Anand and other close co-workers of Gandhi, for him to explain the background of his public campaigns. In 1999, the book was designated as one of the "100 Best Spiritual Books of the 20th Century" by a committee of global spiritual and religious authorities.[2] Contents[edit] Translator's preface[edit] This section is written by Mahadev Desai who translated the book from Gujarati to English in 1940. 1 (1.7¢ US) and had run five editions by the time of writing this preface. 50,000 copies had been sold in Gujarati but since the English edition was expensive it prevented Indians from buying. Introduction[edit] Part I[edit]

Martin Luther King, Jr. Dr. King became a civil rights activist early in his career. He led the 1955 Montgomery Bus Boycott and helped found the Southern Christian Leadership Conference (SCLC) in 1957, serving as its first president. With the SCLC, King led an unsuccessful 1962 struggle against segregation in Albany, Georgia (the Albany Movement), and helped organize the 1963 nonviolent protests in Birmingham, Alabama that attracted national attention following television news coverage of the brutal police response. King also helped to organize the 1963 March on Washington, where he delivered his famous "I Have a Dream" speech. There, he established his reputation as one of the greatest orators in American history. On October 14, 1964, King received the Nobel Peace Prize for combating racial inequality through nonviolence. In 1968, King was planning a national occupation of Washington, D.C., to be called the Poor People's Campaign, when he was assassinated on April 4 in Memphis, Tennessee. Doctoral studies

John Ruskin John Ruskin (8 February 1819 – 20 January 1900) was the leading English art critic of the Victorian era, also an art patron, draughtsman, watercolourist, a prominent social thinker and philanthropist. He wrote on subjects ranging from geology to architecture, myth to ornithology, literature to education, and botany to political economy. His writing styles and literary forms were equally varied. He was hugely influential in the latter half of the 19th century, and up to the First World War. Ruskin first came to widespread attention with the first volume of Modern Painters (1843), an extended essay in defence of the work of J. Early life (1819–1846)[edit] Genealogy[edit] Ruskin was the only child of first cousins.[1] His father, John James Ruskin (1785–1864), was a sherry and wine importer[1] founding partner and de facto business manager of Ruskin, Telford and Domecq (see Allied Domecq). Childhood and education[edit] Travel[edit] First publications[edit] Oxford[edit]

Paulo Freire Paulo Reglus Neves Freire, Ph.D (/ˈfrɛəri/, Portuguese: [ˈpawlu ˈfɾeiɾi]; September 19, 1921 – May 2, 1997) was a Brazilian educator and philosopher who was a leading advocate of critical pedagogy. He is best known for his influential work, Pedagogy of the Oppressed, which is considered one of the foundational texts of the critical pedagogy movement.[1][2][3] Biography[edit] Freire was born September 19, 1921 to a middle class family in Recife, Brazil. Freire became familiar with poverty and hunger during the Great Depression of the 1930s. In 1931, the family moved to the less expensive city of Jaboatão dos Guararapes, and in 1933 his father died. In 1946, Freire was appointed Director of the Department of Education and Culture of the Social Service in the state of Pernambuco. In 1964, a military coup put an end to that effort. On the strength of reception of his work, Freire was offered a visiting professorship at Harvard University in 1969. In 1986, his wife Elza died.

American Indian Movement Flag of the American Indian Movement The American Indian Movement (AIM) is a Native American advocacy group in the United States, founded in 1968 in Minneapolis, Minnesota, with an agenda that focuses on spirituality, leadership, and sovereignty. The founders included Dennis Banks, George Mitchell, Herb Powless, Clyde Bellecourt, Harold Goodsky, Eddie Benton-Banai, and a number of others in the Minneapolis Native American community.[1] Russell Means, born Oglala Lakota, was an early leader in 1970s protests. In October 1972, AIM gathered members from across the country to a protest in Washington, D.C. known as the "Trail of Broken Treaties". AIM gained national attention when it seized the Bureau of Indian Affairs national headquarters and presented a 20-point list of demands to the federal government. Background[edit] 1960s[edit] Presidents John F. Wallace "Mad Bear" Anderson was a Tuscarora leader in New York in the 1950s. The initial AIM movement[edit] Events[edit] 1978[edit] 2008[edit]

Unto This Last "Unto This Last" is an essay on economy by John Ruskin, first published in December 1860 in the monthly journal Cornhill Magazine in four articles. Ruskin says himself that these articles were "very violently criticized", forcing the publisher to stop the publication after four months. Subscribers sent protest letters. But Ruskin countered the attack and published the four articles in a book in May 1862. The title is a quotation from the Parable of the Workers in the Vineyard. I will give unto this last, even as unto thee. The "last" are the eleventh hour labourers, who are paid as if they had worked the entire day. The eleventh hour labourers, etching by Jan Luyken based on the Parable of the Workers in the Vineyard The essay begins with the following verse:[2] “Friend, I do thee no wrong. Gandhi's paraphrase[edit] Gandhi translated "Unto This Last" into Gujarati in 1908 under the title of "Sarvodaya" ("well being of all"). References[edit] External links[edit]

Cesar Chavez Cesar Chavez (born César Estrada Chávez, locally: [ˈsesaɾ esˈtɾaða ˈtʃaβes]; March 31, 1927 – April 23, 1993) was an American farm worker, labor leader and civil rights activist, who, with Dolores Huerta, co-founded the National Farm Workers Association (later the United Farm Workers union, UFW).[1] A Mexican American, Chavez became the best known Latino American civil rights activist, and was strongly promoted by the American labor movement, which was eager to enroll Hispanic members. His public-relations approach to unionism and aggressive but nonviolent tactics made the farm workers' struggle a moral cause with nationwide support. By the late 1970s, his tactics had forced growers to recognize the UFW as the bargaining agent for 50,000 field workers in California and Florida. Early life and education Chavez was born on March 31, 1927, in Yuma, Arizona, in a Mexican-American family of six children.[3] He was the son of Juana Estrada and Librado Chávez. Activism Worker's rights Immigration

The Holy Family by Marx and Engels The Holy Family Chapter VI 3) d) Critical Battle Against French Materialism “Spinozism dominated the eighteenth century both in its later French variety, which made matter into substance, and in deism, which conferred on matter a more spiritual name.... Spinoza’s French school and the supporters of deism were but two sects disputing over the true meaning of his system.... The simple fate of this Enlightenment was its decline in romanticism after being obliged to surrender to the reaction which began after the French movement.” That is what Criticism says. To the Critical history of French materialism we shall oppose a brief outline of its ordinary, mass-type history. “Speaking exactly and in the prosaic sense”, there are two trends in French materialism; one traces its origin to Descartes, the other to Locke. We shall therefore merely say the following: Descartes in his physics endowed matter with self-creative power and conceived mechanical motion as the manifestation of its life.

Angela Davis Angela Yvonne Davis (born January 26, 1944) is an American political activist, scholar, and author. She emerged as a nationally prominent counterculture activist and radical in the 1960s, as a leader of the Communist Party USA, and had close relations with the Black Panther Party through her involvement in the Civil Rights Movement despite never being an official member of the party. Prisoner rights have been among her continuing interests; she is the founder of Critical Resistance, an organization working to abolish the prison-industrial complex. She is a retired professor with the History of Consciousness Department at the University of California, Santa Cruz, and is the former director of the university's Feminist Studies department.[2] Her research interests are in feminism, African-American studies, critical theory, Marxism, popular music, social consciousness, and the philosophy and history of punishment and prisons. Early life[edit] Davis attended Carrie A. Education[edit]