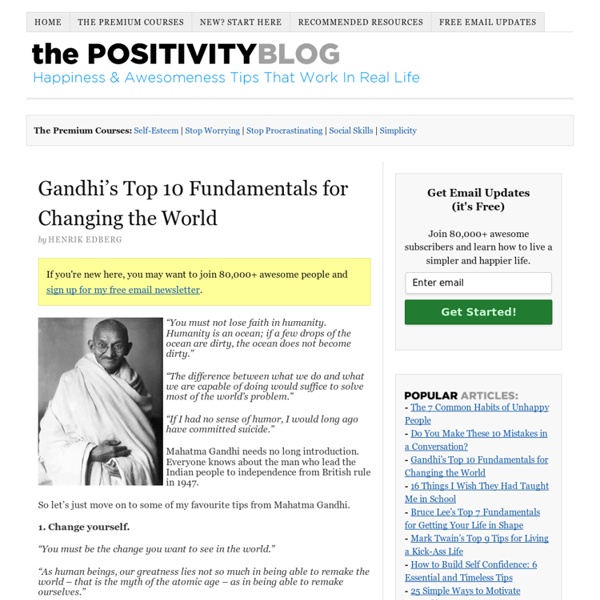 “You must not lose faith in humanity. Humanity is an ocean; if a few drops of the ocean are dirty, the ocean does not become dirty.” “The difference between what we do and what we are capable of doing would suffice to solve most of the world’s problem.” “If I had no sense of humor, I would long ago have committed suicide.” Mahatma Gandhi needs no long introduction. Everyone knows about the man who lead the Indian people to independence from British rule in 1947. So let’s just move on to some of my favourite tips from Mahatma Gandhi. 1. “You must be the change you want to see in the world.” “As human beings, our greatness lies not so much in being able to remake the world – that is the myth of the atomic age – as in being able to remake ourselves.” If you change yourself you will change your world. And the problem with changing your outer world without changing yourself is that you will still be you when you reach that change you have strived for. 2. “Nobody can hurt me without my permission.”

Top 40 Useful Sites To Learn New Skills The web is a powerful resource that can easily help you learn new skills. You just have to know where to look. Sure, you can use Google, Yahoo, or Bing to search for sites where you can learn new skills , but I figured I’d save you some time. Here are the top 40 sites I have personally used over the last few years when I want to learn something new. Teacher to parents: About THAT kid (the one who hits, disrupts and influences YOUR kid) Amy Murray is the director of early childhood education at the Calgary French & International School in Canada. The following post, which appeared on her blog, Miss Night’s Marbles and which I am republishing with her permission, is a powerful open letter directed to parents about THAT kid, the one other kids go home and talk about, the one who is violent, curses and gets angry in class, the one who parents worry will hurt, disrupt and perhaps influence their own children. Murray is also the co-founder of #Kinderchat (www.kinderchat.net), a twitter-based global community for educators of young children. She is a speaker and trainer on learning through play, self-regulation, behavior management, and the use of technology within the classroom. (IStockphoto) Dear Parent:

10 Tips to Let Go of the Past & Embrace the Future "Two monks were on a pilgrimage. One day, they came to a deep river. At the edge of the river, a young woman sat weeping because she was afraid to cross the river without help. She begged the two monks to help her. The Random Reflections of Little Red Riding Hood: Top Ten Quotes on Hope 1. “Hope is the thing with feathers That perches in the soul And sings the tune without the words And never stops at all.” ―Emily Dickinson 2. “There is some good in this world, and it's worth fighting for.” ―J.R.R.

13 Things to Remember When Life Gets Rough We’ve all gone through hard times. And we all get through them. However, some get through them better than others. So what is their secret? Most of it has to do with attitude. Teaching for Peace - Web sources for peace and social justice education Welcome to the Teaching for Peace Website "Peace cannot be achieved through violence, it can only be attained through understanding." - Ralph Waldo Emerson If our schools today are to produce truly global citizens, then that puts a heavy burden on educators to stimulate critical thinking about the critical issues of the day – war and peace, global conflict and inequality, issues of gender, race, class, and so on. It’s a long list. Teaching for Peace is a new web resource where we bring it all together, and provide easy-to-use, practical classroom lessons as well as comprehensive links to resources for peace education.

10 Differences Between Successful and Unsuccessful People Everyone strives to be successful, but it doesn’t always come easily. The people who do end up reaching their highest potential always possess certain qualities and habits that allowed them to get there which separate them from those who don’t. Here are 10 differences between successful and unsuccessful people! 1. The Introvert's Guide to Art Retreats I used to think I was just shy. Back in school, I dreaded having to stand up and talk in front of the class; I once missed an entire week of school just so I wouldn’t have to give an oral book report. [Note: it didn’t work.] Then, in adulthood, when I discovered I love standing up and talking to a group of people, I thought, well, gee, maybe I’d overcome my shyness (yes) and become an extrovert (no). It wasn’t until I understood that introversion isn’t about being shy; it’s about where you get your energy. The very short simplistic version is that introverts get energy from time spent alone, and extroverts get theirs from being with other people.

69 Awesome Brain Hacks That Give You Mind-Blowing Powers Remember when Neo got to choose between the red pill and the blue pill? The blue pill would have put him back to sleep in the fake world of cubicles and steaks in the Matrix, where the red pill would wake him up to the real world and its industrial womb factory. You probably just chalked that scene up to another case of Hollywood turning a complicated situation into a simplistic metaphor, but what you probably didn't realize is that you're living out your own little Matrix scenario every time you go to the pharmacy. "I really hope being swallowed by a mirror is covered by my insurance." What? Fifteen Minutes of ... One day when i was in fourth grade, my parents sat me down at the dining room table. Their faces were very concerned and it all seemed very serious; I thought I was in trouble. Not really, they just wanted to have a talk, about a subject that to 9-year-old me was a bit nebulous. They told me i was bazigoosh, a word that translates directly to game-ear in Persian, but basically means I'm a slacker, easily distracted, a procrastinator, too fun-loving for my own good. To counter this this horrible plight, the loving parents suggested I spend less time with Traci and Ashleigh, with their freewheeling divorcee moms and Guess! jeans, and hang out more with Alicia Ngo, all striped cotton dresses and straight A's.

How to Be Alone: An Antidote to One of the Central Anxieties and Greatest Paradoxes of Our Time by Maria Popova “We live in a society which sees high self-esteem as a proof of well-being, but we do not want to be intimate with this admirable and desirable person.” If the odds of finding one’s soul mate are so dreadfully dismal and the secret of lasting love is largely a matter of concession, is it any wonder that a growing number of people choose to go solo? The choice of solitude, of active aloneness, has relevance not only to romance but to all human bonds — even Emerson, perhaps the most eloquent champion of friendship in the English language, lived a significant portion of his life in active solitude, the very state that enabled him to produce his enduring essays and journals. And yet that choice is one our culture treats with equal parts apprehension and contempt, particularly in our age of fetishistic connectivity. Solitude, the kind we elect ourselves, is met with judgement and enslaved by stigma.

How to Find Your Bliss: Joseph Campbell on What It Takes to Have a Fulfilling Life by Maria Popova “You have to learn to recognize your own depth.” In 1985, mythologist and writer Joseph Campbell (March 26, 1904–October 30, 1987) sat down with legendary interviewer and idea-monger Bill Moyers for a lengthy conversation at George Lucas’s Skywalker Ranch in California, which continued the following year at the American Museum of Natural History in New York.

Virginia Woolf on Why the Best Mind Is the Androgynous Mind by Maria Popova “In each of us two powers preside, one male, one female… The androgynous mind is resonant and porous… naturally creative, incandescent and undivided.” In addition to being one of the greatest writers and most expansive minds humanity ever produced, Virginia Woolf (January 25, 1882–March 28, 1941) was also a woman of exceptional wisdom on such complexities of living as consciousness and creativity, the consolations of aging, how one should read a book, and the artist’s eternal dance with self-doubt. So incisive was her insight into the human experience that, many decades before scientists demonstrated why “psychological androgyny” is essential to creativity, Woolf articulated this idea in a beautiful passage from her classic 1929 book-length essay A Room of One’s Own (public library). A year after she subverted censorship and revolutionized the politics of gender identity with her novel Orlando, Woolf writes: Illustration from 'I’m Glad I’m a Boy!