Carrotmob - Vote with your money 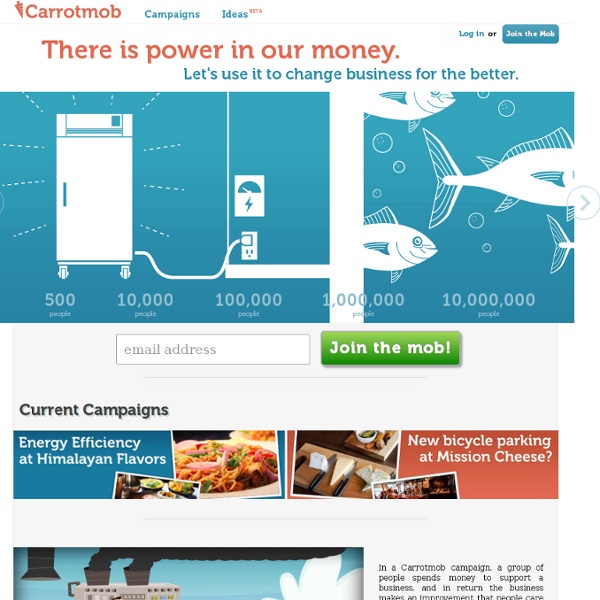 Guide to Peace, Development, Human Rights and Related Networking Sites If you haven’t noticed, here at the Peace and Collaborative Development Network, we are committed to providing a platform where interested people can connect with each other, share information, and find useful tools for their goals. However, we are obviously not alone. We believe that more networking means more opportunities. In this guide you will find other social networking sites devoted to promoting peace or social justice in one way or another. Some are very specific and some are much more general.

Fracking In Our Backyard : One Percent for the Planet Through our current campaign, Our Common Waters, and with exposure to increased oil and gas development near our homes and communities, we have grown concerned about hydraulic fracturing (commonly called “fracking”) and its impact on water, air, soil, wildlife habitat, and human health. Over 90% of oil and gas wells in the U.S. use fracking to aid in extraction, and many fracking fluids and chemicals are known toxins for humans and wildlife. For decades, natural gas (methane) deposits were tapped by single wells drilled vertically over large, free-flowing pockets of gas. Then came fracking, a water- and chemical-intensive method that promised the profitable extraction of natural gas trapped in shale. [Above: A natural gas fracking site in Erie, Colorado across the field from an elemetary school.

Local Currencies: Communities Printing Own Money To Keep Cash Flowing UPDATE: USA Today's reporting on local currencies gives the impression that this is a NEW phenomenon born from the recession. Rather, many of these programs have existed for some time. The organization that runs BerkShares, told Huffington Post that it has been producing currency since 2006, well before the financial crisis dominated headlines. Ithaca Hours have been in production since 1991. Despite the fact that these currencies have existed - a point USA Today should update - there is a growing interest in currency production for communities hit by the recession. New currencies, like the Detroit Cheers are coming into play.

Linking Peacebuilders: Key Network Organizations in the Field Dear Colleagues As the conflict resolution and peacebuilding field has grown an increasing number of organizations and associations have been formed to help share information, exchange best practice, work on conflict advocacy, etc. Some organizations are more practitioner focused and concentrate more on organizations, while others are more for individuals and possibly more academic and research focused (and a number combine both approaches).

Embassy Network Guests are a cornerstone of our house and we love having new (and familiar) people stay with us. This isn’t your typical B&B – it’s more of an adopted family. We’re working on the hypothesis that density breeds ideas and collaborations, and that’s a big part of what we hope to foster here. We know and expect that guests are usually traveling for specific projects and collaborations. Similarly, residents are working on their own projects most days. But, just like staying with a friend or family mbber, it’s nice to hang out a bit, too!

Great! The next step is to verify your address. There was a problem connecting your Facebook account. Please sign in to Nextdoor Design District to continue. If you don't have an account, sign up. The End of Corporate Social Responsibility: Crisis and Critique: Peter Fleming: 9781849205160 Electronic Inspection Copy available for instructors here Providing a much-needed critique of Corporate Social Responsibility (CSR) practice and scholarship, this book seeks to redress CSR advocacy, from a political and critical perspective. A strident approach backed up by extensive use of case studies presents the argument that most CSR-related activity aims to gain legitimacy from consumers and employees, and therefore furthers the exploitative and colonizing agenda of the corporation. By examining CSR in the context of the political economy of late capitalism, the book puts the emphasis back on the fact that most large corporations are fundamentally driven by profit maximization, making CSR initiatives merely another means to this end.

In most places around the globe, violence has stopped making sense Are we living through the least violent moment in human history? Has there ever been an age, during the past 10,000 years, with fewer wars or mass killings or chances of being murdered? The answer seems, to me, almost self-evident. There are terrible wars today, but they are extremely scarce, not very intense and do not affect the lives of many people. Land Grabs It's not necessarily a problem when wealthy companies invest in agricultural land in poor countries for commercial use. But when families are kicked off the land or less food is grown as a result, that's a very big problem indeed. Recent data indicates that at least 33 million hectares of land deals have been identified since 2001 – an area 8 times the size of the Netherlands. And since the food price spikes of 2008, that's been happening more and more. Demand for land has soared as investors look for places to grow food for export, grow crops for biofuels, or simply buy-up land for profit.

ii. Foreword by Charles Eisenstein FOREWORD by Charles Eisenstein Going into my first conversation with Mark Boyle a year ago, I was feeling a little bit defensive. “He probably thinks he is better than the rest of us,” I thought. Naked Protesting - Hot 'Chicks' Battle KFC in Australia PETA has been leading the “naked” protesting” trend in a series of nonviolent (and eye-pleasing) protests involving hot women and men getting naked to draw public attention to pressing issues of animal cruelty—bull fighting, live export, and factory farming. Their most recent campaign targets the poultry giant KFC, which retails an estimated 736 million chickens annually (NYT). PETA has been successful in the past, raising awareness about the unethical treatment of cattle by McDonalds and Burger King chains. The KFC boycott targets the enormous factory farming operation required to produce and process 1,400 ‘CPM’ (chickens per minute). Animals are tightly caged, fed a host of hormones and antibiotics to deal with the rampant disease in such enclosed environments, and then machine-slaughtered. The latest protest this summer in Sydney resulted in the arrest of three caged women holding signs reading “Chicks Agree: Boycott KFC.”

Stop Fearing, Start Thinking: The Fixperts Social Project We're lucky. I mean, really lucky. We live in a global culture of makers, imaginers, and inventors. Every single day brings with it amazing, new technological advances. Stripping Down for Alter-Globalization - European Social Forum Protest Now this is what a real naked protest looks like: no clothes. Well, almost. You have to count out one pair of socks, but it’s much more worthy of the title than those half-arsed efforts with undies-wearing anti-KFC impostors. I mean, if you’re gonna do it, do it right and go all for it! So what’s all the fuss about?

Subbable: Subscription crowdfunding for rabid YouTube fans By Carmel DeAmicis On September 30, 2013 Two brothers — Hank and John Green — have produced online videos since 2007. Known as the VlogBrothers, they gained notoriety for their work on early Web shows such as “Brotherhood 2.0″ and “The Lizzie Bennet Diaries.”