List of wars and anthropogenic disasters by death toll 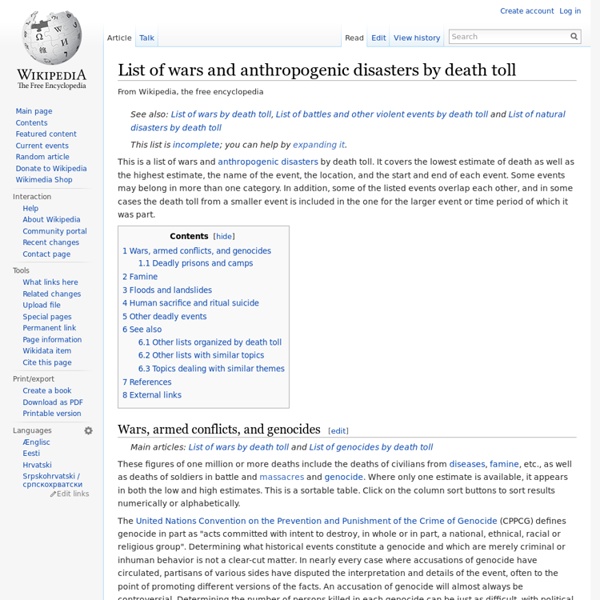 Molotov–Ribbentrop Pact The Molotov–Ribbentrop Pact, named after the Soviet foreign minister Vyacheslav Molotov and the Nazi German foreign minister Joachim von Ribbentrop, officially the Treaty of Non-aggression between Germany and the Union of Soviet Socialist Republics,[a] and also known as the Ribbentrop–Molotov Pact or Nazi–Soviet Pact, was a non-aggression pact signed in Moscow in the late hours of 23 August 1939. The pact's publicly stated intentions were a guarantee of non-belligerence by either party towards the other, and a commitment that neither party would ally with or aid an enemy of the other party. This latter provision ensured that Germany would not support Japan in its undeclared war against the Soviet Union along the Manchurian-Mongolian border, ensuring that the Soviets won the Battles of Khalkhin Gol. The pact remained in force until the German government broke it by invading the Soviet Union on 22 June 1941. Names[edit] Text of the secret protocol (in German) Background[edit]

Military and Veteran Benefits, News, Veteran Jobs | Military.com Battle of the Atlantic As an island nation, the United Kingdom was highly dependent on imported goods. Britain required more than a million tons of imported material per week in order to be able to survive and fight. In essence, the Battle of the Atlantic was a tonnage war: the Allied struggle to supply Britain and the Axis attempt to stem the flow of merchant shipping that enabled Britain to keep fighting. From 1942 onwards, the Germans also sought to prevent the build-up of Allied supplies and equipment in the British Isles in preparation for the invasion of occupied Europe. The Battle of the Atlantic was the dominating factor all through the war. The outcome of the battle was a strategic victory for the Allies—the German blockade failed—but at great cost: 3,500 merchant ships and 175 warships were sunk for the loss of 783 U-boats. §Name[edit] On March 5, 1941, First Lord of the Admiralty A.V. §Background[edit] §Early skirmishes (September 1939 – May 1940)[edit] §Submarine warfare[edit] §British situation[edit]

Countdown to Zero Official Film Site Operation Barbarossa Operation Barbarossa (German: Fall Barbarossa, literally "Case Barbarossa"), beginning 22 June 1941, was the code name for Germany's invasion of the Soviet Union during World War II.[17][18] Over the course of the operation, about four million soldiers of the Axis powers invaded the USSR along a 2,900 km (1,800 mi) front,[1][4][19] the largest invasion in the history of warfare. In addition to troops, Barbarossa used 600,000 motor vehicles and 750,000 horses.[20] The ambitious operation was driven by Adolf Hitler's persistent desire to conquer the Soviet territories as embodied in Generalplan Ost. It marked the beginning of the pivotal phase in deciding the victors of the war. The German invasion of the Soviet Union caused a high rate of fatalities: 95% of all German Army casualties that occurred from 1941 to 1944, and 65% of all Allied military casualties from the entire war. German intentions[edit] Nazi Germany policy towards the Soviet Union[edit] Germany plans the invasion[edit]

Thích Quảng Đức Thích is a Buddhist honorary title and Quảng Đức is descriptive of meritorious attributes: see dharma name. Thích Quảng Đức[1] (1897 – 11 June 1963, born Lâm Văn Túc), was a Vietnamese Mahayana Buddhist monk who burned himself to death at a busy Saigon road intersection on 11 June 1963.[2] Quang Duc was protesting the persecution of Buddhists by the South Vietnamese government led by Ngô Đình Diệm. Photographs of his self-immolation were circulated widely across the world and brought attention to the policies of the Diệm government. John F. Kennedy said in reference to a photograph of Duc on fire, "No news picture in history has generated so much emotion around the world as that one. Quang Duc's act increased international pressure on Diệm and led him to announce reforms with the intention of mollifying the Buddhists. Biography[edit] Accounts of the life of Quảng Đức are derived from information disseminated by Buddhist organizations. Religious background[edit] Self-immolation[edit] [edit]

Strategic bombing during World War II Strategic bombing during World War II was the sustained aerial attack on railways, harbors, cities, workers' housing, and industrial districts in enemy territory during World War II. Strategic bombing is a military strategy which is distinct from both close air support of ground forces and tactical air power.[13] During World War II, it was believed by many military strategists of air power that major victories could be won by attacking industrial and political infrastructure, rather than purely military targets.[14] Strategic bombing often involved bombing areas inhabited by civilians and sometimes bombing campaigns were deliberately designed to target civilian populations in order to terrorize, disorganize, and disrupt their usual activities. In the Pacific War, the Japanese bombed civilian populations throughout the war (e.g. in Chongqing). Legal considerations[edit] General Telford Taylor, Chief Counsel for War Crimes at the Nuremberg Trials, wrote that: Europe[edit] Poland[edit]

The Guantanamo Files -- Wikileaks In its latest release of classified US documents, WikiLeaks is shining the light of truth on a notorious icon of the Bush administration’s "War on Terror" — the prison at Guantánamo Bay, Cuba, which opened on January 11, 2002, and remains open under President Obama, despite his promise to close the much-criticized facility within a year of taking office. In thousands of pages of documents dating from 2002 to 2008 and never seen before by members of the public or the media, the cases of the majority of the prisoners held at Guantánamo — 765 out of 779 in total — are described in detail in memoranda from JTF-GTMO, the Joint Task Force at Guantánamo Bay, to US Southern Command in Miami, Florida. These memoranda, known as Detainee Assessment Briefs (DABs), contain JTF-GTMO’s recommendations about whether the prisoners in question should continue to be held, or should be released (transferred to their home governments, or to other governments). (Andy Worthington) 1. 2. 3. a. 4. 5. 6. 7. 8. 9.

Howard Zinn Life and career[edit] Early life[edit] Zinn was born to a Jewish immigrant family in Brooklyn. His father, Eddie Zinn, born in Austria-Hungary, emigrated to the U.S. with his brother Samuel before the outbreak of World War I. World War II[edit] On a post-doctoral research mission nine years later, Zinn visited the resort near Bordeaux where he interviewed residents, reviewed municipal documents, and read wartime newspaper clippings at the local library. Zinn wrote: I recalled flying on that mission, too, as deputy lead bombardier, and that we did not aim specifically at the 'Skoda works' (which I would have noted, because it was the one target in Czechoslovakia I had read about) but dropped our bombs, without much precision, on the city of Pilsen. Six years later, he wrote: Recall that in the midst of the Gulf War, the U.S. military bombed an air raid shelter, killing 400 to 500 men, women, and children who were huddled to escape bombs. Education[edit] Academic career[edit]