Did the Common Core assessments cause the decline in NAEP scores? When the NAEP scores were released last week, math achievement had fallen by 1.3 points in fourth grade and 2.4 points in eighth grade. 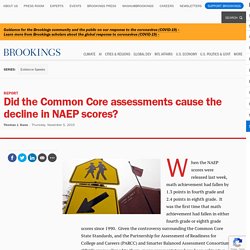 It was the first time that math achievement had fallen in either fourth grade or eighth grade scores since 1990. Why Did The Approach To Teaching Math Change With Common Core? Why did the approach to mathematics change with Common Core, rather than providing more structure to how it was previously taught? 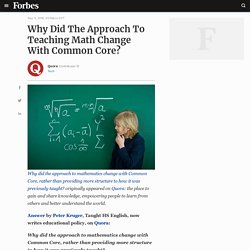 Originally appeared on Quora: the place to gain and share knowledge, empowering people to learn from others and better understand the world. Answer by Peter Kruger, Taught HS English, now writes educational policy, on Quora: Why did the approach to mathematics change with Common Core, rather than providing more structure to how it was previously taught? This is actually a really good question, and it goes to the heart of the large backlash against Common Core. I can’t tell you how often I have dealt with snarky or enraged parents who vent about “Common Core math” and how awful it is.

How Common Core Damages Students' College Readiness — The James G. Martin Center for Academic Renewal. As Massachusetts was considering signing on to a national curriculum and testing plan called Common Core, one of its lead writers gave a presentation to its state board of education. 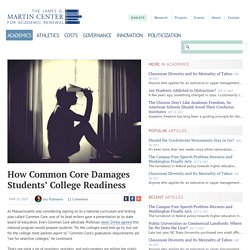 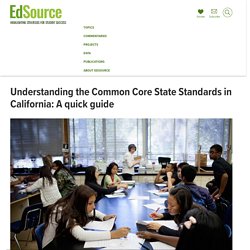 Although the State Board of Education adopted new Common Core standards in math and English language arts nearly seven years ago, some school districts are still in the process of implementing them. Forty-one other states around the country have also adopted the standards, which were created to help U.S. students compete with high school graduates from around the world for 21st Century jobs. What Texans need to know about Common Core education standards. Even though Texas is not part of the national voluntary Common Core education standards, they’re still a hot political topic in the state. 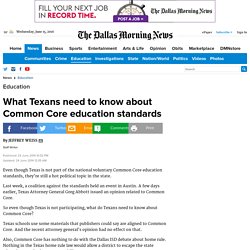 Last week, a coalition against the standards held an event in Austin. A few days earlier, Texas Attorney General Greg Abbott issued an opinion related to Common Core. So even though Texas is not participating, what do Texans need to know about Common Core? Standards in Your State. Forty-one states, the District of Columbia, four territories, and the Department of Defense Education Activity (DoDEA) have adopted the Common Core State Standards. 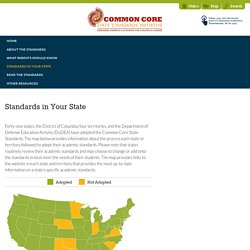 The map below provides information about the process each state or territory followed to adopt their academic standards. Please note that states routinely review their academic standards and may choose to change or add onto the standards to best meet the needs of their students. Deconstructing the Common Core Mathematical Standard. Ever since I started to get a real picture of what mathematics is about I’ve viewed middle school and high school mathematics education like a bit of a snob. 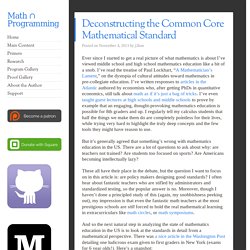 I’ve read the treatise of Paul Lockhart, “A Mathematician’s Lament,” on the dystopia of cultural attitudes toward mathematics in pre-collegiate education. I’ve written responses to articles in the Atlantic authored by economists who, after getting PhDs in quantitative economics, still talk about math as if it’s just a bag of tricks. I’ve even taught guest lectures at high schools and middle schools to prove by example that an engaging, thought-provoking mathematics education is possible for 8th graders and up. I regularly tell my calculus students that half the things we make them do are completely pointless for their lives, while trying very hard to highlight the truly deep concepts and the few tools they might have reason to use.

But it’s generally agreed that something’s wrong with mathematics education in the US. Why Would a Math Teacher Punish a Child for Saying 5 x 3 = 15? Thank you for your interest in Patheos newsletters! 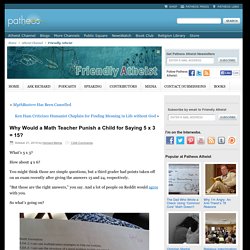 Please enter your email address below and click the "Subscribe" button. Thank you for your subscription. You can visit your Preference Center to complete your profile and see what else we have to offer. We apologize, we were unable to complete your subscription at this time, please try again later. If this error persists please contact us at communications@patheos.com. Common Core in California: How did your school score? - Los Angeles Times. As Common Core results trickle in, initial goals unfulfilled. LOS ANGELES (AP) — Results for some of the states that participated in Common Core-aligned testing for the first time this spring are out, with overall scores higher than expected though still below what many parents may be accustomed to seeing. 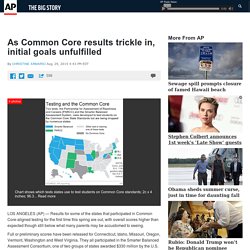 Full or preliminary scores have been released for Connecticut, Idaho, Missouri, Oregon, Vermont, Washington and West Virginia. They all participated in the Smarter Balanced Assessment Consortium, one of two groups of states awarded $330 million by the U.S. 3 Things that Don't Suck about the Common Core Math Standards. Posted by Lindsey Walborn on Wednesday, 06/17/2015 Since the implementation of the Common Core State Standards (CCSS), there’s been plenty of controversy, especially when it comes to math. 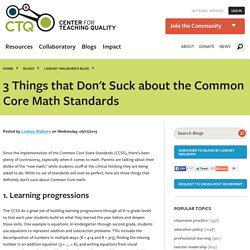 Parents are talking about their dislike of the “new math,” while students scoff at the critical thinking they are being asked to do. While no set of standards will ever be perfect, here are three things that definitely don’t suck about Common Core math: 1. Learning progressions The CCSS do a great job of building learning progressions through all K-12 grade levels so that each year students build on what they learned the year before and deepen those skills. As students move into middle school, variables (x, y, z) are added to equations, and students use opposite operations to find the variable’s value. 2. I created this Wordle using the top 100 words in the CCSS math standards. When this picture popped up, I was surprised at the sentence that emerged: “Understand problems using numbers and equations.”

Common Core Resources. Gateway. Smarter Balanced ® ~ Online Panel for Achievement Level Setting. SBAC Portal. Testing Consortium Crafts College-Readiness Definition - Curriculum Matters. Higher Education. More than one-third of all students require remedial education once they enter public two- and four-year colleges. Smarter Balanced is working with higher education leaders and faculty to develop an assessment system that helps prepare high school graduates for the demands of college. A College Readiness Assessment Too many students graduate from high school without the knowledge and skills they need to succeed in college and the workplace. The Smarter Balanced assessments are part of a national movement to address this problem. Common Core State Standards Initiative. Achievement Level Descriptors and College Readiness. Achievement level descriptors (ALDs) articulate the knowledge, skills, and processes expected of students at different levels of performance on the Smarter Balanced assessments.

Smarter Balanced is developing an integrated suite of ALDs aligned with the Common Core State Standards and the Smarter Balanced assessment claims in English language arts/literacy and mathematics. Draft initial ALDs were developed in October 2012 by K-12 teachers and administrators and higher education faculty from two- and four-year colleges and universities representing Smarter Balanced Governing States. The ALDs are linked to an operational definition of college content-readiness, as well as a policy framework to guide score interpretation for high schools and colleges. Following their initial development, both the ALDs and the definition of college content-readiness were revised based on a series of reviews from member states, partners, and individual stakeholders.