How government is changing under Theresa May. Image copyright AP Theresa May sat at the same cabinet table for six years. 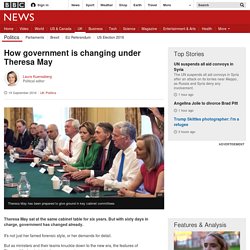 But with sixty days in charge, government has changed already. It's not just her famed forensic style, or her demands for detail. But as ministers and their teams knuckle down to the new era, the features of Theresa May's administration are emerging. Members of the cabinet agree there is now more discussion, more consultation with colleagues. Theresa May's cabinet: Who's in and who's out? Theresa May is forming her new government after becoming Conservative prime minister. Francis Maude: The Civil Service must reform. His comments come after Nick Herbert, the former minister for policing and criminal justice, said Yes Minister, the television comedy, is an “essential training manual” for members of the government. 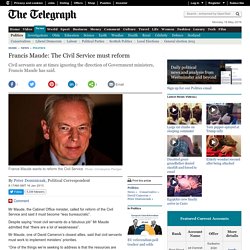 Mr Herbert said his experience of the Civil Service while serving as a minister made him “question whether the model still works”. Mr Herbert, the Conservative MP for Arundel and South Downs, is undertaking a cross-party project on how to improve relations between civil service and ministers. Tony Blair, the former prime minister, this week said he believed that the Civil Service was "hopelessly bureaucratic" and no longer fit for purpose. "Time has passed them by," Mr Blair said. Although criticising the organisation, Mr Maude said “most civil servants do a fabulous job”. The Francis Maude interview: "Buy-in is great, but the civil service doesn’t have a veto on its own reform"

Most politicians are coy about their ambitions. 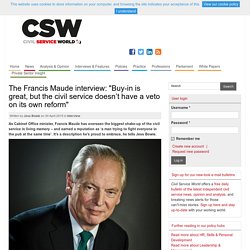 Ask a minister or MP which Cabinet job they have their eye on and they inevitably insist they’re more than happy in their current role, and proud to serve their constituents. Even politicians with years of service under their belt can be bashful. Budget 2016 summary: Key points at-a-glance. George Osborne has delivered his eighth Budget as chancellor. 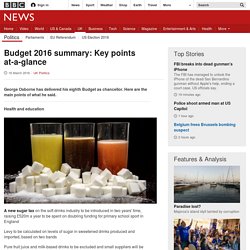 Here are the main points of what he said. Health and education Image copyright PA A new sugar tax on the soft drinks industry to be introduced in two years' time, raising £520m a year to be spent on doubling funding for primary school sport in England Levy to be calculated on levels of sugar in sweetened drinks produced and imported, based on two bands Pure fruit juice and milk-based drinks to be excluded and small suppliers will be exempt Secondary schools in England to bid for £285m in new funding for extra after-school activities like sport and art Plan for all schools in England to become academies by 2022 Compulsory maths lessons until 18 to be looked at. 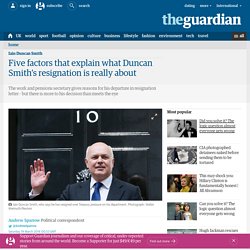 Matters of policy, personality and timing all normally play a part. What really explains Iain Duncan Smith’s decision to resign? Iain Duncan Smith quits: David Cameron 'puzzled' by resignation. Six things we learned from Iain Duncan Smith's resignation. "There has been too much emphasis on money saving exercises and not enough awareness from the Treasury, in particular, that the government’s vision of a new welfare-to-work system could not be repeatedly salami-sliced," he concluded in his resignation letter to the Prime Minister. 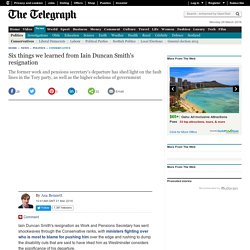 Tensions between the two came to the fore in 2013 when a book reported that the Chancellor thought Mr Duncan Smith was "not clever enough" for high office, while the minister compared Mr Osborne and David Cameron to "Ant and Dec running the country". Mr Duncan Smith was asked about the "Ant and Dec" jibe on the Andrew Marr show and pointedly refused to condemn it. He also refused to personally endorse George Osborne as a potential Prime Minister, in a further indication of how he feels about the Chancellor. 2. Election 2015: Who's who in David Cameron's cabinet. Here's a guide to who's who in David Cameron's cabinet: Prime Minister David Cameron, who became prime minister in 2010 at the head of a coalition government with the Liberal Democrats, has now appointed an all-Conservative cabinet. 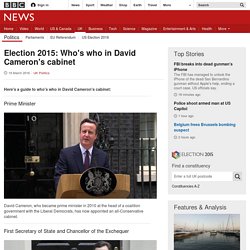 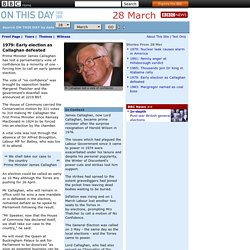 The vote of "no confidence" was brought by opposition leader Margaret Thatcher and the government's downfall was announced at 2219 BST. The House of Commons carried the Conservative motion by 311 votes to 310 making Mr Callaghan the first Prime Minister since Ramsay MacDonald in 1924 to be forced into an election by the chamber. A vital vote was lost through the absence of Sir Alfred Broughton, Labour MP for Batley, who was too ill to attend. Inquiries are not about making victims feel better. The purpose of an inquiry such as Chilcot is to study and thus improve how public policy in a controversial matter was made and implemented. 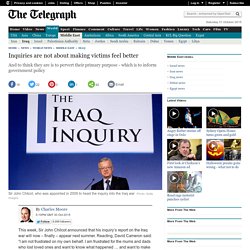 It is supposed, in doing so, to serve the interest of good government for all, not of any particular individual or group, however meritorious or suffering. First, it tries to establish what happened, inquisitorially rather than adversarially (hence the fact that it has not been conducted by lawyers). In the case of the nine years covered, this is a gigantic task, with mountains of documentation and scores of witnesses. Britain's drone strike in Syria: These executions are a mark of tyranny. The lack of public response to the British government ordering the assassination by pilotless drones of two British citizens, Reyaad Khan and Rahul Amin, is alarming but scarcely surprising. 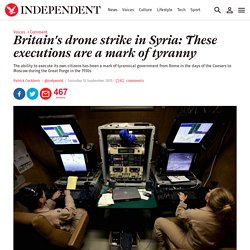 The two Isis members were killed outside Raqqa in Syria because they were allegedly planning attacks in Britain, though the nature of the threat they posed remains a secret. Their deaths were never going to shock many people in Britain, given IS’s ghastly record for carrying out ritual murders, rapes and massacres. Gove returns to heart of government as Cameron picks team to redraw political map. David Cameron has long held the belief that less is more when it comes to cabinet reshuffles, and on the face of it the strengthening of his authority on winning the Tories’ first overall majority in 23 years hardly seems to have changed his mind. But on Saturday, after confirming the continued roles of his chancellor George Osborne, home secretary Theresa May, foreign secretary Philip Hammond and defence secretary Michael Fallon, the prime minister did something both eye-catching and highly significant.

John Prescott launches blistering attack on Ed Miliband's 'presidential' campaign. John Prescott, the former Labour deputy prime minister, has launched a blistering attack on Ed Miliband’s failed “presidential-type” general election campaign. Lord Prescott poured scorn on the former Labour leader’s “Hell, yes, I’m tough” boast, and said the party had paid the price for failing to defend the economic record of the last Labour government in the last parliament. Writing in the Sunday Mirror, Prescott said it had been a “bloody disastrous” result for the party as David Cameron secured the first outright majority for the Conservatives since 1992. “We fought a presidential-type election based on computers, charts, focus groups and even the American language – Hell yes? Hell no!” He wrote.

David Cameron working out his first all-Tory cabinet - BBC News. 1986: Heseltine quits over Westland. Ministerial code change to face legal challenge - BBC News. The prime minister is facing a direct legal challenge over changes to the code which sets out rules and standards for ministers' conduct. A new version of the ministerial code omits a previous reference to ministers being bound by international law. Senior lawyers claim this could affect the UK's international position and relationship with other states. Collapsed charity Kids Company given £46m in public cash - BBC News. Image copyright PA Collapsed charity Kids Company received at least £46m of public money despite repeated concerns about how it was run, the National Audit Office has found.