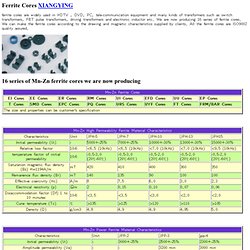 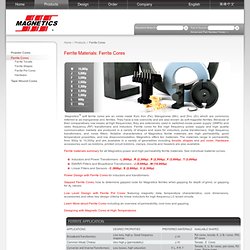 Search Results - Ferrites and Accessories - Product Parameter - Product Search - EPCOS AG. Permeability (electromagnetism) A closely related property of materials is magnetic susceptibility, which is a measure of the magnetization of a material in addition to the magnetization of the space occupied by the material. 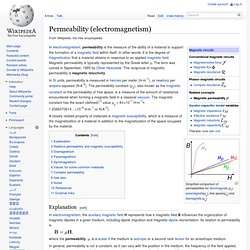 In electromagnetism, the auxiliary magnetic field H represents how a magnetic field B influences the organization of magnetic dipoles in a given medium, including dipole migration and magnetic dipole reorientation. Its relation to permeability is In general, permeability is not a constant, as it can vary with the position in the medium, the frequency of the field applied, humidity, temperature, and other parameters.

In a nonlinear medium, the permeability can depend on the strength of the magnetic field. Permeability as a function of frequency can take on real or complex values. B is related to the Lorentz force on a moving charge q: H is related to the magnetic dipole density. Where μ0 = 4π × 10−7 N A−2. Magnetisation curve for ferromagnets (and ferrimagnets) and corresponding permeability where . Magnetic core. The use of a magnetic core can enormously concentrate the strength and increase the effect of magnetic fields produced by electric currents and permanent magnets. 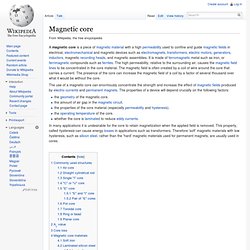 The properties of a device will depend crucially on the following factors: In many applications it is undesirable for the core to retain magnetization when the applied field is removed. This property, called hysteresis can cause energy losses in applications such as transformers. Therefore 'soft' magnetic materials with low hysteresis, such as silicon steel, rather than the 'hard' magnetic materials used for permanent magnets, are usually used in cores.

Commonly used structures[edit] Air core[edit] Straight cylindrical rod[edit] The presence of the high permeability core increases the inductance but the field must still spread into the air at the ends of the rod. Single "I" core[edit] Like a cylindrical rod but square, rarely used on its own. "C" or "U" core[edit]