I am on the mathematics faculty at Chabot College, a community college in Hayward, CA.

Big-O notation. (definition) Definition: A theoretical measure of the execution of an algorithm, usually the time or memory needed, given the problem size n, which is usually the number of items. 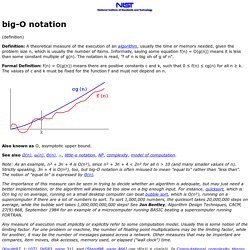 Informally, saying some equation f(n) = O(g(n)) means it is less than some constant multiple of g(n). The notation is read, "f of n is big oh of g of n". Formal Definition: f(n) = O(g(n)) means there are positive constants c and k, such that 0 ≤ f(n) ≤ cg(n) for all n ≥ k. The values of c and k must be fixed for the function f and must not depend on n. Also known as O, asymptotic upper bound. See alsoΩ(n), ω(n), Θ(n), ∼, little-o notation, NP, complexity, model of computation. Note: As an example, n² + 3n + 4 is O(n²), since n² + 3n + 4 < 2n² for all n > 10 (and many smaller values of n). The importance of this measure can be seen in trying to decide whether an algorithm is adequate, but may just need a better implementation, or the algorithm will always be too slow on a big enough input. Author: PEB Donald E. Better grades aren't why more guys do STEM. Share this Article You are free to share this article under the Attribution 4.0 International license. 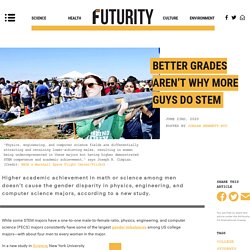 Higher academic achievement in math or science among men doesn’t cause the gender disparity in physics, engineering, and computer science majors, according to a new study. While some STEM majors have a one-to-one male-to-female ratio, physics, engineering, and computer science (PECS) majors consistently have some of the largest gender imbalances among US college majors—with about four men to every woman in the major. “Physics, engineering, and computer science fields are differentially attracting and retaining lower-achieving males, resulting in women being underrepresented in these majors… In a new study in Science, New York University researchers report that men with very low high-school GPAs in math and science and very low SAT math scores were choosing these math-intensive majors just as often as women with much higher math and science achievement.

The Congressional Subpoena Power: How It Is Enforced. Subpoenas: The Supreme Court has described the congressional power of inquiry as “an essential and appropriate auxiliary to the legislative function.”The issuance of a subpoena pursuant to an authorized investigation is “an indispensable ingredient of lawmaking.” 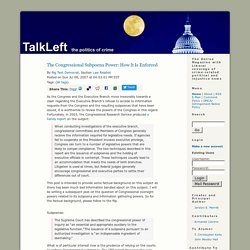 What is of particular interest now is the prudence of relying on the courts to enforce Congressional subpoenas. The CRS report discusses the very interesting 1975 Ashland case, which involved the Federal Trade Commission's resistance to compliance with a Congressional subpoena: A dispute between a House subcommittee and the Federal Trade Commission(FTC) began on April 16, 1975, when the commission issued an order requiring Ashland Oil, Inc. to submit information on Ashland’s estimates of natural gasreserves on various leases. Ashland submitted the information on August 27, stating that the information was confidential and of a proprietary nature, and that disclosure to competitors would cause injury to Ashland. Stanley S. 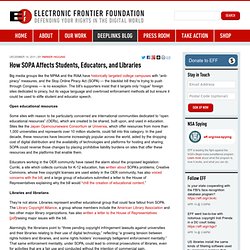 The bill’s supporters insist that it targets only “rogue” foreign sites dedicated to piracy, but its vague language and overbroad enforcement methods all but ensure it could be used to stifle student and educator speech. Open educational resources Some sites with reason to be particularly concerned are international communities dedicated to “open educational resources” (OERs), which are created to be shared, built upon, and used in education. Sites like the Japan Opencourseware Consortium or Universia, which offer resources from more than 1,000 universities and represents over 10 million students, could fall into this category.

Libraries and librarians They’re not alone. Fair use for students and educators What can you do?