Why Chinese Is So Damn Hard 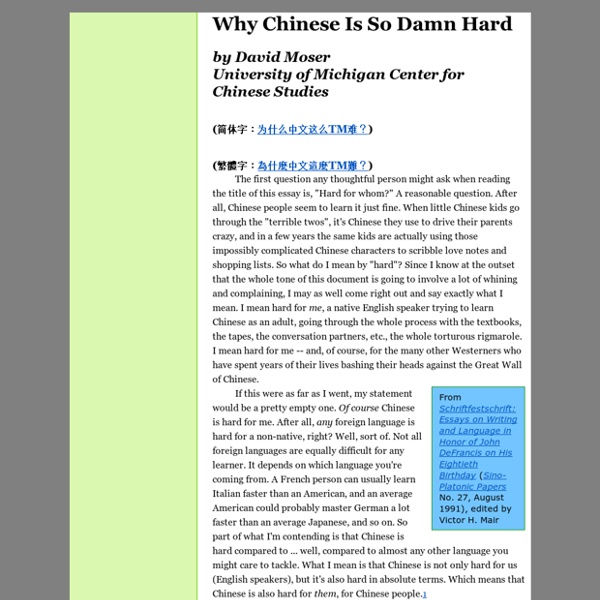 (简体字：为什么中文这么TM难？) (繁體字：為什麼中文這麼TM難？) The first question any thoughtful person might ask when reading the title of this essay is, "Hard for whom?" A reasonable question. After all, Chinese people seem to learn it just fine. When little Chinese kids go through the "terrible twos", it's Chinese they use to drive their parents crazy, and in a few years the same kids are actually using those impossibly complicated Chinese characters to scribble love notes and shopping lists. If this were as far as I went, my statement would be a pretty empty one. If you don't believe this, just ask a Chinese person. Everyone's heard the supposed fact that if you take the English idiom "It's Greek to me" and search for equivalent idioms in all the world's languages to arrive at a consensus as to which language is the hardest, the results of such a linguistic survey is that Chinese easily wins as the canonical incomprehensible language. 1. Beautiful, complex, mysterious -- but ridiculous. 2. 3. 4. 5. 6. 7. 8. Related:  Language • Chinese Learning Resources

'As happy as a clam' - the meaning and origin of this phrase What's the meaning of the phrase 'As happy as a clam'? Very happy and content. What's the origin of the phrase 'As happy as a clam'? Why would clams be happy? "It never occurred to him to be discontented... The first definitive record that I can find of the 'high water' version is from the US newspaper The Bangor Daily Whig And Courier, December 1841: "Your correspondent has given an interesting, and, undoubtedly correct explanation of the expression: 'As happy as a clam at high water.'" However, several biographies of General Robert E. The expression was well-enough known in the USA by the late 1840s for it to have been included in John Russell Bartlett's Dictionary Of Americanisms - A Glossary of Words And Phrases Usually Regarded As Peculiar To The United States, 1848: "As happy as a clam at high water," is a very common expression in those parts of the coast of New England where clams are found. See other 'as x as y similes'. See other phrases that were coined in the USA.

Written Chinese China Resources Page <p><span>If you can see this line, then JavaScript is turned off on your machine and you will not be able to use some features of this site. Please click <a href="../securitywarning.html">here</a> for more information.</span></p> The linked pages have been prepared for use in classes relating to China and may be assigned for direct use on-line if desired. Some are reference materials — maps, charts, &c. or brief essays. Unless otherwise indicated, these materials were all written by me and may be freely used by teachers and students without additional permission. Click here for a technical note about displaying tone-marked letters and Chinese characters and test page to check your browser's present capabilities. Organization of This Page Other Pages of Links on this Site 1. Historical Texts for Class Discussion Sīmǎ Qiān: The First Emperor of Qín (Qín Shǐ Huángdì 司马迁秦始皇帝) (Anonymous Translation. 2. 3. Confucian & Philosophical Documents for Class Discussion 4. 5. 6. 7. Return to top

Grace Pei's Grades 9-10 Novice-High to Intermediate-Low Chinese Class — 'Asking for and giving directions' TEQ Instructional Videos for Chinese Language Teachers Chinese language teacher Grace Pei, who teaches at St. Andrew's Episcopal School in Mississippi, demonstrates how to teach a common skill such as asking for directions by guiding students step by step to learn and practice new language skills in context. The functional objective for this lesson is for students to be able to ask for, and give, local directions, including by using Google Earth. For guidance on how to use these materials, please see How to Use the TEQ Series: Instructional Videos for Chinese Language Teachers. Watch Chinese language teacher Grace Pei help her students practice asking for and giving directions. Your comments and feedback are always highly appreciated.

Confusables: Assure, Ensure, and Insure - Copyediting.com Spellcheck probably won’t help you choose correctly among assure, ensure, and insure. In fact, because of some overlap in definitions, you might have some problems yourself deciding which word is the right one, especially if you’re working with historical texts. According to Etymonline, ensure and insure both probably extend from the same Anglo-French root, which in turn may have been influenced by or been an alteration of an earlier word that developed into assure. So the meanings of these three words have long overlapped — and likely given pause to writers and editors for several centuries. Ensure vs. The differentiation of ensure and insure is widely — though not universally — recognized among writers and editors: Insure applies to a financial contexts. Their differentiation occurred slowly and extended well into the twentieth century. We the People of the United States, in Order to form a more perfect Union, establish Justice, insure domestic Tranquility, … Assure