锵锵三人行. 记录片：北京 北师大麦当劳-你做的选择就是最好的安排（都是汉语）-纪录片-高清完整正版视频在线观看-优酷. 25 Films From the 2010s That Will Help You Understand China. In early 2020, RADII will be presenting a blockbuster list of the best movies to help you understand China. 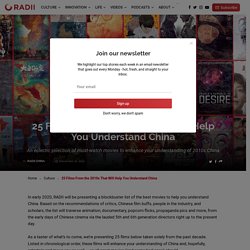 Based on the recommendations of critics, Chinese film buffs, people in the industry, and scholars, the list will traverse animation, documentary, popcorn flicks, propaganda pics and more, from the early days of Chinese cinema via the lauded 5th and 6th generation directors right up to the present day. As a taster of what’s to come, we’re presenting 25 films below taken solely from the past decade. Listed in chronological order, these films will enhance your understanding of China and, hopefully, entertain and move you as well — as all great movies (and some bad ones) should.

Disagree with the selections below or think we missed something? Let us know in the comments at the bottom of this page or come at us on social media — we look forward to discussing more about Chinese cinema with you. Single Man (Hao Jie, 2010) Let the Bullets Fly (Jiang Wen, 2010) WATCH IT: Google Play | YouTube. 第一集：飞盘到底是个什么鬼？Frisbee lessons in Chinese! 如何扔一个正手？美国队长飞盘课第3集. 非诚勿扰 - Fei cheng wu rao TV Show - Learn Chinese.

Chinese Cinema as Cultural Translation and Self-Representation. The Search for General Tso review: Great new documentary chronicles the fascinating history of Chinese-American food. Photo illustration by Lisa Larson-Walker for Slate If you’ve ever eaten at a Chinese restaurant—and I’m going to assume you have—you’ve probably wondered about General Tso’s chicken. 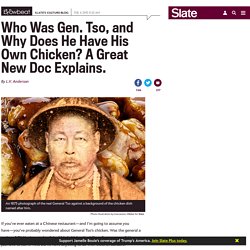 Was the general a real guy? Did he invent the dish of fried chicken in chili-garlic sauce, or did he just love to eat it? And did he have anything to do with Colonel Sanders? These questions have been floating around the back of my mind for years, but out of laziness, I’ve never tried to dig up answers. The film gets the basics out of the way quickly: Zuo Zongtang—whose name is often transliterated on menus as Tso, Tsau, Gao, or Gau—was a 19th-century Hunanese general best known for helping to quash the Taiping peasant rebellion.

To understand those origins, Cheney traces the history of Chinese food in America, which is in many ways a microcosm of the history of Chinese people in America. Best of all, you will understand the context in which General Tso’s chicken caught on, which isn’t always pretty. Searching for America with General Tso. I’m one of those people who don’t correctly pronounce the “mapo” in mapo tofu or the “Tso” in General Tso’s chicken. 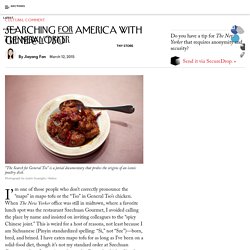 When The New Yorker office was still in midtown, where a favorite lunch spot was the restaurant Szechuan Gourmet, I avoided calling the place by name and insisted on inviting colleagues to the “spicy Chinese joint.” This is weird for a host of reasons, not least because I am Sichuanese (Pinyin standardized spelling: “Si,” not “Sze”)—born, bred, and brined. I have eaten mapo tofu for as long as I’ve been on a solid-food diet, though it’s not my standard order at Szechuan Gourmet, where I sometimes choose the General, which a friend once described as “the best kind of Chinese food because it’s Chinese food without the weird stuff.”

“The Search for General Tso,” a jovial feature-length documentary that probes the origins of this iconic poultry dish, seems to share my interest in this dilemma (if not my overgrown anxiety). 在水一方01 - 在线观看 - 电视剧 - 乐视视频. 为了充分保护您的个人信息安全和合法权益，请绑定手机后发表评论！ 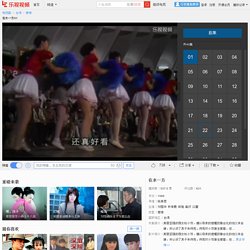 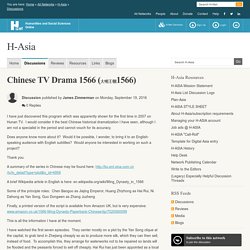 I would consider it the best Chinese historical dramatization I have seen, although I am not a specialist in the period and cannot vouch for its accuracy. Does anyone know more about it? Would it be possible, I wonder, to bring it to an English-speaking audience with English subtitles? Would anyone be interested in working on such a project? Thank you. A summary of the series in Chinese may be found here: A brief Wikipedia article in English is here: en.wikipedia.org/wiki/Ming_Dynasty_in_1566 Some of the principle roles: Chen Baoguo as Jiajing Emperor, Huang Zhizhong as Hai Rui, Ni Dahong as Yan Song, Guo Dongwen as Zhang Juzheng Finally, a printed version of the script is available from Amazon UK; but is very expensive:www.amazon.co.uk/1566-Ming-Dynasty-Paperback-Chinese/dp/7020060099 This is all the information I have at the moment.