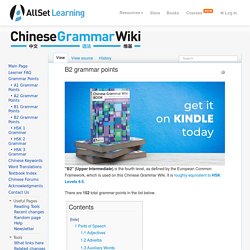 It is roughly equivalent to HSK Levels 4-5. There are 152 total grammar points in the list below. Parts of Speech These following grammar points fit pretty neatly into one part of speech category. Adjectives Adverbs Auxiliary Words Conjunctions Nouns Particles Prepositional Phrase Prepositions Sentence Patterns Verbs Auxiliary verbs Verb phrases Grammatical Structures These are grammatical structures that do not correspond neatly to just one particular part of speech. Adverbs with Adjectives "But" Statements Cause/Effect Statements Complements Conditional Statements "Even If" Statements "If" Statements "No Matter" Statements Either… or Let alone Not only… but also… Comparisons of Similar Grammar Points What's the difference between this grammar point and that grammar point? 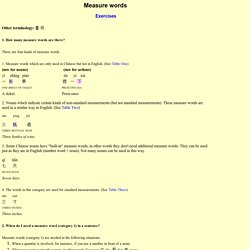 How many measure words are there? There are four kinds of measure words. 1. (mw for nouns) (mw for actions) yì zhāng piào èn yí xià 一 张 票 摁 一 下 A ticket. 2. Sān píng jiŭ 三 瓶 酒 Three bottles of wine. 3. Qī tiān 七 天 Seven days. 4. 三 寸 Three inches. 2. Measure words (category 1) are needed in the following situations. When a quantity is involved, for instance, if you use a number in front of a noun. Tā yŏu yìbĕn hányŭ shū nă ge lăoshī jiāo nĭmen kǒuyǔ 他有 一 本 汉语 书. He has a Chinese book Which teacher teaches you the spoken language? 3. The following sentence pattern shows how a measure word is used with the object of the sentence. s. v. number/这/那/每/哪/几 +mw+ description of 的 noun I have three books which can be used for teaching foreigners (to learn) Chinese. 4. The question word 多少 doesn't need a measure word, where as 几 needs one. zhōngwénxì yŏu duōshao ge xuésheng 中文 系 有 多少 (个) 学生? 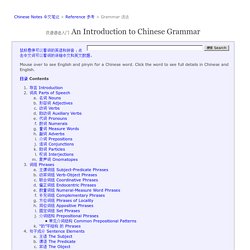 In Chinese one Chinese character represents a single syllable. 汉语的词可以分成实词和虚词两大类。 Chinese words can be divided into two kinds. 虚词包括副词、介词、连词、助词、叹词和象词六类。 Function words include six kinds: adverbs, prepositions, conjunctions, particles, interjections, and onomatopes. 附类是词头和词尾两种构词成分。 Affixes include prefixes and suffixes, which can both be used to construct sentence elements. 词类 Parts of Speech 名词 Nouns 名词表示人或事物名称。 Nouns express the names of people or objects. 名词本身一般没有单数和复数的分别。 In general, nouns do not inherently have a difference in singular and plural forms. 动词“是” Chinese word order - Chinese Grammar Wiki. 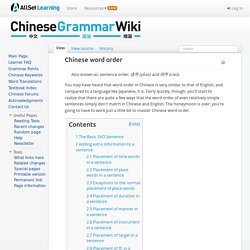 You may have heard that word order in Chinese is very similar to that of English, and compared to a language like Japanese, it is. Fairly quickly, though, you'll start to realize that there are quite a few ways that the word order of even relatively simple sentences simply don't match in Chinese and English. The honeymoon is over; you're going to have to work just a little bit to master Chinese word order. The Basic SVO Sentence On this level, Chinese word order very closely matches English word order. This concept shouldn't take long at all to master, but you can see more examples in our basic sentence order article. Adding extra information to a sentence More details can be added to the basic sentence structure.