Geonncannon_thesponsor. Disclaimer: Characters and situations are all from my imagination. 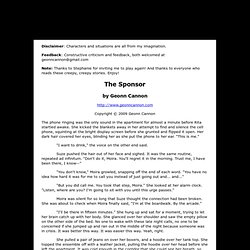 Feedback: Constructive criticism and feedback, both welcomed at geonncannon@gmail.com Note: Thanks to Stephanie for inviting me to play again! And thanks to everyone who reads these creepy, creepy stories. Geonn Cannon - Greek Mythology. Disclaimer : Characters and situations are all from my imagination. 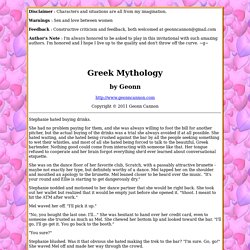 Warnings : Sex and love between women Feedback : Constructive criticism and feedback, both welcomed at geonncannon@gmail.com Author's Note : I'm always honored to be asked to play in this invitational with such amazing authors. Heaven in Her Face. The Pen Name by Geonn Cannon. Geonn Cannon Disclaimers: None. 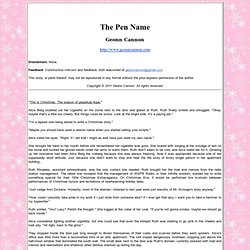 Feedback: Constructive criticism and feedback, both welcomed at geonncannon@gmail.com This story, or parts thereof, may not be reproduced in any format without the prior express permission of the author. Rolling Hills. DISCLAIMER: This is an original story that I have written. 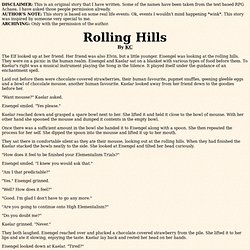 Some of the names have been taken from the text based RPG Achaea. I have asked those people permission already. AUTHOR'S NOTE: This story is based on some real life events. Ok, events I wouldn't mind happening *wink*. A New Chance. DISCLAIMER: This is an original story that I have written. 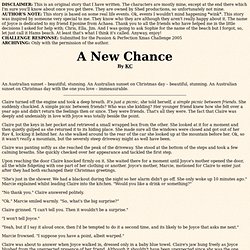 The characters are mostly mine, except at the end there which I'm sure you'll know about once you get there. They are owned by Shed productions, so unfortunately not mine. AUTHOR'S NOTE: This story is based on some real life events. Ok, events I wouldn't mind happening *wink*. Expected. DISCLAIMER: This is an original story that I have written. 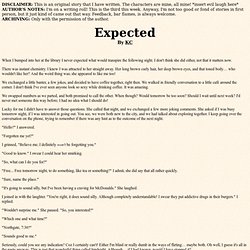 The characters are mine, all mine! *insert evil laugh here* AUTHOR'S NOTES: I'm on a writing roll! This is the third this week. Anyway, I'm not too good or fond of stories in first person, but it just kind of came out that way. Dawn to Dusk – Goodbye My Friend. DISCLAIMER: This is an original story that I have written. 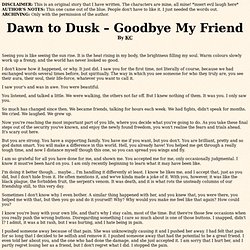 The characters are mine, all mine! *insert evil laugh here* AUTHOR'S NOTES: This one came out of the blue. People don't have to like it. The Seven Seas. DISCLAIMER: This is an original story that I have written. 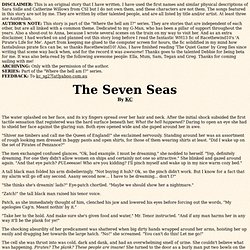 I have used the first names and similar physical descriptions of Sara Sidle and Catherine Willows from CSI but I do not own them, and these characters are not them. The songs featured in this story are not by me. They are written by other talented people, and are all listed by title and/or artist. At least three are Australian. Professional Help. DISCLAIMER: This story is an original work of fiction that includes prostitution and late-in-life lesbianism. 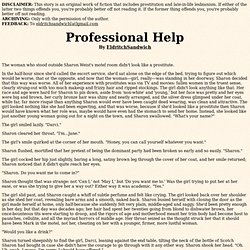 If either of the latter two things offends you, you're probably better off not reading it. If the former thing offends you, you're probably better off not reading. ARCHIVING: Only with the permission of the author. FEEDBACK: To eldritchsandwich[at]gmail.com Professional HelpBy EldritchSandwich The woman who stood outside Sharon Weist's motel room didn't look like a prostitute. In the half-hour since she'd called the escort service, she'd sat alone on the edge of the bed, trying to figure out which would be worse, that or the opposite, and now that the woman—girl, really—was standing in her doorway, Sharon decided that this way was worse.

Don't Stand So Close to Me. DISCLAIMER: The title is courtesy of the Police; the rest is all me. 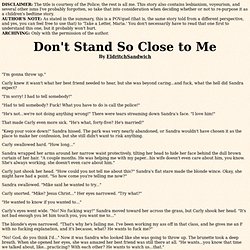 This story also contains lesbianism, voyeurism, and several other isms I've probably forgotten, so take that into consideration when deciding whether or not to re-purpose it as a children's bedtime story. AUTHOR'S NOTE: As stated in the summary, this is a POVquel (that is, the same story told from a different perspective, and yes, you can feel free to use that) to 'Take a Letter, Maria.' You don't necessarily have to read that one first to understand this one, but it probably won't hurt. ARCHIVING: Only with the permission of the author.

Rumors Concerning the Video Kids. DISCLAIMER: This story contains original characters in original situations, at least according to my writer's ego. Though not quite mentioned by name, Shivaree's song "Little Black Mess" is from the album 'Who's Got Trouble? ', and is awesome. ARCHIVING: Only with the permission of the author. Rumors Concerning the Video KidsBy EldritchSandwich "Gwen?

" Gwen looked up from her lunch table to find a pair of wide brown eyes staring back at her, eyes that were set in a tanned, heart-shaped face framed by straight, black hair. "Connor? "Yeah. "Uh, sure," Gwen stuttered. Gwen almost jumped when Connor's hand shot across the table, wrapping around hers with an iron grip. Desperate Measures. ACKNOWLEDGEMENTS: This time I had a bunch of people that helped me make this story a better one. Jae, Pam, Nene, and Alena were so kind to point out the flaws in my plot, grammar and wording. This story wouldn't be what it is without you. All errors, omissions, and transgressions left in the story are solely my own responsibility.

BlissBy Kristattoo "Follow your bliss and the universe will open doors for you where there were only walls. " Joseph Campbell The excited chatter of the people around me was having a seriously adverse effect on my nerves. "Why did I come here? " "Beats the hell out of me," I answered. Night Dreams Chapter 20, a general fiction. Chapter Twenty "What do you mean, Cynthia was attacked?! " Norsebard - On The Fast Track To Love 2. Passion's Bright Fury. It was an ordinary Monday morning in July, and she scarcely took notice of the people around her as she leaned against the metal pole in the center of the subway car.

Her briefcase was secured in one hand, the Times folded in half length-wise and held up in front of her face with the other. It was seven-thirty a.m., the height of rush hour, and eighty early morning commuters filled every seat and pressed against her in the narrow aisle. Death Wears Yellow Garters Chapter 4: Part Four, a mystery fiction.

Chapter Sixteen: Jay and Nicole were waiting for Aunt Mimi in Olmstead Park, sitting on one of the benches across from the same war statue that seemed to stand in every park in the state. "She said she'd be here at 3:00, right? " Jay asked, checking her watch for the third time. Love and Honor. The Written Word. Ann McMan - Falling From Grace. Disclaimers: None. All of the characters are mine. Ann McMan - Jericho. Ann McMan - Dust. The Scream. DEDICATION To my fellow beta readers and editors, who know all too well that what horrifies one person is not necessarily that which sends another shrieking into the night. ACKNOWLEDGEMENTS My deep gratitude to Steph and the Royal Academy of Bards formotivating me to stop beta reading long enough to write and post this,my second completed work of fanfiction.