Ursa - Books - Welcome to Walker Books Australia. By Tina Shaw This alternate history coming-of-age YA is the Winner of the 2018 Storylines Tessa Duder Award. 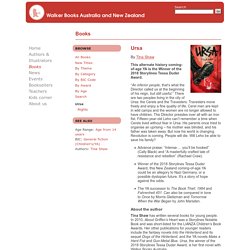 “An inferior people, that’s what the Director called us at the beginning of his reign, but still useful.” There are two peoples living in the city of Ursa: the Cerels and the Travesters. Travesters move freely and enjoy a fine quality of life. Cerel men are kept in wild camps and the women are no longer allowed to have children. Advance praise: “Intense … you’ll be hooked” (Cally Black) and “A masterfully crafted tale of resistance and rebellion” (Rachael Craw). About the author Tina Shaw has written several books for young people. ISBN: 9781760651244 Imprint: Walker Books Australia Distributor: Walker Australia-HEDS Binding: Paperback Release Date: April 1, 2019 Dimensions: 135 x 210mm, 304pp Stock Status: Confirmed Australian RRP: $19.99 New Zealand RRP: $22.99 Stock Level: In Stock.

The Quiet at the End of the World - Books - Welcome to Walker Books Australia. By Lauren James A sci-fi mystery adventure about the last surviving members of the human race. 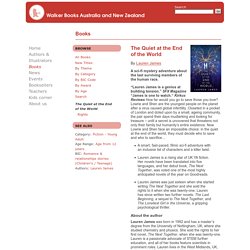 “Lauren James is a genius at building tension.” SFX Magazine “James is one to watch.“ Kirkus Reviews How far would you go to save those you love? Lowrie and Shen are the youngest people on the planet after a virus caused global infertility. Closeted in a pocket of London and doted upon by a small, ageing community, the pair spend their days mudlarking and looking for treasure – until a secret is uncovered that threatens not only their family but humanity’s entire existence. A smart, fast-paced, filmic sci-fi adventure with an inclusive list of characters and a killer twist. 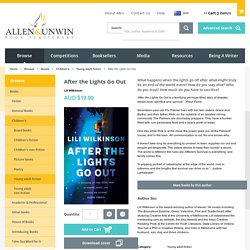 How do you stay alive? Who do you trust? How much do you have to sacrifice? 'After the Lights Go Out is a terrifying yet hope-filled story of disaster, deceit, love, sacrifice and survival.' - Fleur Ferris Seventeen-year-old Pru Palmer lives with her twin sisters, Grace and Blythe, and their father, Rick, on the outskirts of an isolated mining community. One day while Rick is at the mine, the power goes out. It doesn't take long for everything to unravel. 'A gripping portrait of catastrophe at the edge of the world, love in extremis, and the lengths that survival can drive us to.' - Justine Larbalestier Author bio: Lili Wilkinson is the award-winning author of eleven YA novels including The Boundless Sublime, Green Valentine, Pink and Scatterheart. 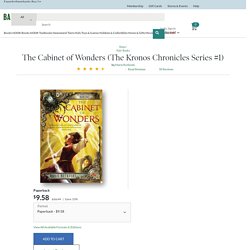 After the Snow by S.D. Crockett. Boy In The Tower by Polly Ho-Yen. Evermore by Isobelle Carmody. Doctor Who: Heroes and Monsters Collection by Various. Phoenix by S.F. Said. A Single Stone by Meg McKinlay. Where the Rock Splits the Sky by Philip Webb. Divergent (Divergent, #1) by Veronica Roth. These Broken Stars (Starbound, #1) by Amie Kaufman. Send Simon Savage by Stephen Measday. Shatter Me (Shatter Me, #1) by Tahereh Mafi. The Forest of Hands and Teeth (The Forest of Hands and Teeth, #1) by Carrie Ryan. Matched (Matched, #1) by Ally Condie. Uglies (Uglies, #1) by Scott Westerfeld. The Sterkarm Handshake (Sterkarm, #1) by Susan Price. Jimmy Coates: Assassin? (Jimmy Coates, #1) by Joe Craig. The Merchant of Death (Pendragon, #1) by D.J. MacHale. The Host (The Host, #1) by Stephenie Meyer. Voyage to Verdada by James Roy. Amazon. The Knife of Never Letting Go (Chaos Walking, #1) by Patrick Ness.

A Cage of Butterflies by Brian Caswell. Ads R Us by Claire Carmichael. Bodies and Soul by David Hill. Thunderfish (Thunderfish, #1) by Simon Higgins. Amazon. Brainjack by Brian Falkner. Of Time And Stars by Arthur C. Clarke. Space Demons: The Trilogy by Gillian Rubinstein. Mortal Engines (The Hungry City Chronicles, #1) by Philip Reeve.

Blaze of Glory (The Laws of Magic, #1) by Michael Pryor. Leviathan (Leviathan, #1) by Scott Westerfeld. Juno Of Taris by Fleur Beale. Nightpeople (Darklands, #1) by Anthony Eaton. 1984 by George Orwell. The Crossing (Blood of the Lamb, #1) by Mandy Hager. The Sky So Heavy by Claire Zorn. Legend (Legend, #1) by Marie Lu. The Last Girl by Michael Adams. Chasing the Valley (Chasing the Valley #1) by Skye Melki-Wegner. A Confusion of Princes by Garth Nix. Beyond the Shaking Time by Simon Higgins. The Interrogation of Ashala Wolf (The Tribe #1) by Ambelin Kwaymullina. 10 Futures by Michael Pryor. Maggot Moon by Sally Gardner. The Eye of Minds (The Mortality Doctrine, #1) by James Dashner.

Amazon. Mole Hunt (The Maximus Black Files #1) by Paul Collins. Assault (Recon Team Angel, #1) by Brian Falkner. The Rig (The Rig, #1) by Joe Ducie. The Illustrated Man by Ray Bradbury. The Road by Cormac McCarthy. Z for Zachariah by Robert C. O'Brien. The Day of the Triffids by John Wyndham. When We Wake by Karen Healey. The Passage (The Passage, #1) by Justin Cronin. Gone (Gone, #1) by Michael Grant. Worldshaker (Worldshaker, #1) by Richard Harland. The Angel Experiment (Maximum Ride, #1) by James Patterson. The Adoration of Jenna Fox by Mary E. Pearson. The House of the Scorpion (Matteo Alacran, #1) by Nancy Farmer. Obernewtyn (Obernewtyn Chronicles, #1) by Isobelle Carmody.