The future according to anime — Hopes&Fears — flow "Film" Welcome to Earth: population 500 million – Linda Marsa. I stare out the window from my tiny flat on the 300th floor, hermetically sealed in a soaring, climate-controlled high-rise, honeycombed with hundreds of dwellings just like mine, and survey the breathtaking vistas from my lofty perch more than half a mile above ground: the craftsman cottages with their well-tended lawns, the emerald green golf courses, the sun-washed aquamarine swimming pools and the multimillion-dollar mansions that hug the sweeping sands from Malibu to Palos Verdes. 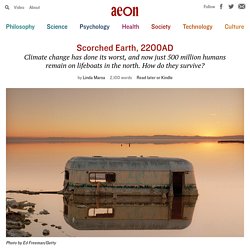 These images evoke feelings of deep nostalgia for a Los Angeles that doesn’t exist anymore, back in the halcyon days before my great-grandparents were born, when procreation wasn’t strictly regulated and billions of people roamed freely on Earth. There are only about 500 million of us left, after the convulsive transformations caused by climate change severely diminished the planet’s carrying capacity, which is the maximum population size that the environment can sustain. Popular now Daily Weekly The Future. How the Victorians invented futurism – Iwan Morus. Keep Working is a nightmare about advertising. Keep Working imagines a near-future with pop-up ads on every food product and piece of furniture. 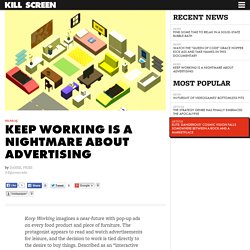 The protagonist appears to read and watch advertisements for leisure, and the decision to work is tied directly to the desire to buy things. Described as an “interactive music video game” directed by Bean Chon, Keep Working meditates on consumerist desires and a life running in circles. Every day you wake up, eat breakfast, go to work, eat lunch, work more, eat in front of the TV, go to sleep, and start over. Eventually the cycle breaks into violence, the player holds up a liquor store, destroys all the computers in the office, robs a bank. As things continue to spiral out of control, mantras show up scrawled on walls. Eyeo 2014 - Claire Evans. In The Dust Of This Planet. Horror, fashion, and the end of the world … things get weird as we explore the undercurrents of thought that link nihilists, beard-stroking philosophers, Jay-Z, and True Detective. 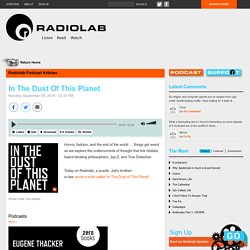 Today on Radiolab, a puzzle. Jad’s brother-in-law wrote a book called 'In The Dust of This Planet'. It’s an academic treatise about the horror humanity feels as we realize that we are nothing but a speck in the universe. For a few years nobody read it. But then … Bright Futures: How Do-It-Yourself Science-Fiction Films Predict the Unpredictable. Story: Sam Hockley-Smith Space travel wasn’t ever supposed to be possible. 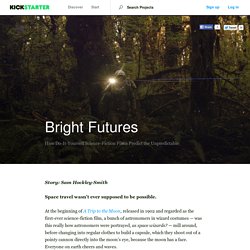 At the beginning of A Trip to the Moon, released in 1902 and regarded as the first-ever science-fiction film, a bunch of astronomers in wizard costumes — was this really how astronomers were portrayed, as space wizards? — mill around, before changing into regular clothes to build a capsule, which they shoot out of a pointy cannon directly into the moon’s eye, because the moon has a face. Everyone on earth cheers and waves. Dystopian Fiction's Popularity Is a Warning Sign for the Future. Ed Kashi Dystopian fiction is hot right now, with countless books and movies featuring decadent oligarchs, brutal police states, ecological collapse, and ordinary citizens biting and clawing just to survive. 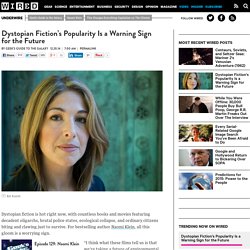 For bestselling author Naomi Klein, all this gloom is a worrying sign. “I think what these films tell us is that we’re taking a future of environmental catastrophe for granted,” Klein says in Episode 129 of the Geek’s Guide to the Galaxy podcast. “And that’s the hardest part of my work, actually convincing people that we’re capable of something other than this brutal response to disaster.” Her new book, This Changes Everything: Capitalism vs. “It seems easier, more realistic, to dim the sun than to put up solar panels on every home in the United States,” says Klein. “Young people have a critical role to play because they’ll be dealing with the worst impacts of climate change,” says Klein. The Difference Between Good Worldbuilding And Great Worldbuilding.

Future Fictions. Perspectives on world-building by Z33. North Korean architects depict visions of the future - News - Art. With conical structures, bridges that appear to defy gravity and even hovercrafts, a series of pieces commissioned by a Bejing-based tour company depict a vision of the DPRK that looks like something straight out of the Futurama or the Jetsons. 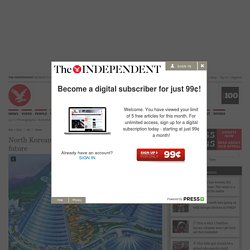 Koryo Tours, which organises trips in North Korea, gave architects in Pyongyang an open brief to envisage designs for sustainable tourism developments in the notoriously secretive country - without restraints on structural possibility. The anonymous architects are from the Paekdusan Construction and Architectural Research Institute, from which most of the state’s major projects are issued. The result of four years’ work depicts futuristic images with a distinctly Soviet influence. While some illustrations bear resemblance to traditional and modern day structures, others are a window on to a world that could only be possible in the very far future. Loading gallery. How not to build a future society. Science fiction films have many warnings for us – not least, how the road to a perfect future society is fraught with peril. 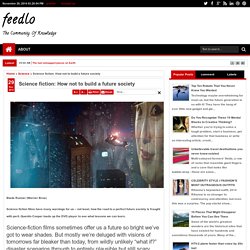 Quentin Cooper loads up the DVD player to see what lessons we can learn. Science-fiction films sometimes offer us a future so bright we’ve got to wear shades. But mostly we’re deluged with visions of tomorrows far bleaker than today, from wildly unlikely “what if?” Disaster scenarios through to entirely plausible but still scary extrapolations of the present. Doris Day may be right when she sings in Que Sera, Sera that “the future’s not ours to see” – for instance, I’m betting no-one saw that Doris Day namecheck coming until I made it – but at least these movies can flag up general directions we might be best steering clear of.

So what can we learn for society and our species to survive? 1. Artificial creatures that look and behave a lot like us also look a lot like a heap of trouble. 2. 4. 5. News. iWonder - Writing the future: A timeline of science fiction literature. OMNI Reboot - The Best Science Fiction Webzine Ever. Motherboard - Show MotherboardShow. No, Dystopian Sci-Fi Isn’t Bad for Society. We Need It More Than Ever. Mark Stevenson/Getty. 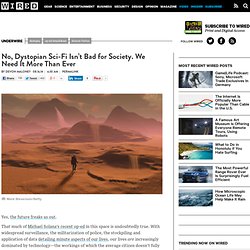 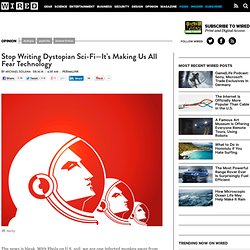 With Ebola on U.S. soil, we are one infected monkey away from the plot of Outbreak. Russia is threatening to invade the Ukraine. We are blowing things up in Iraq again, where starving children are being massacred. There is overpopulation, and climate change; there is peak oil; there is a truly alarming spike in the diagnosis of autism. Michael Solana Michael Solana is the author of Citizen Sim: Cradle of the Stars, and works for Founders Fund, a venture capital firm dedicated to the identification of and investment in highly-scalable technology companies.