Original m/m fiction recs, a couple slash recs, and some pictures of paris: causeways. I've been reading a lot of original m/m fic online lately, or fanfic that reads like it, but damned if I don't just keep getting pickier. 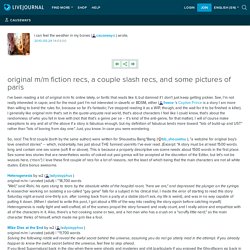 See, I'm not really interested in caper, and for the most part I'm not interested in slavefic or BDSM, either ( freece 's Captive Prince is a story I am more than willing to bend the rules for, because so far it's fantastic; I've stopped reading it as a WIP, though, and the wait for it to be finished is killer). I generally like original m/m that's set in the quote-unquote real world, that's about characters I feel like I could know, that's about the randomness of who you fall in love with (not that that's a genre per se -- it's kind of the anti-genre, for that matter). I will of course make exceptions to any and all of the above if a story is fabulous enough, but my definition of fabulous tends more toward "lots of build-up and UST" rather than "lots of boning from day one. " Just, you know. So, recs! Heterogenesis by w2 ( Mike Dies at the End by w2 ( 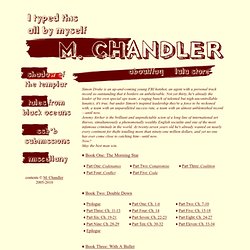 Not yet thirty, he's already the leader of his own special ops team; a ragtag bunch of talented but nigh-uncontrollable lunatics, it's true, but under Simon's inspired leadership they're a force to be reckoned with, a team with an unparalleled success rate, a team with an almost unblemished record—until now. Jeremy Archer is the brilliant and unpredictable scion of a long line of international art thieves, simultaneously a phenomenally wealthy English socialite and one of the most infamous criminals in the world. At twenty-seven years old he's already wanted on nearly every continent for thefts totalling more than ninety-one million dollars, and yet no one has ever come close to catching him—until now. Now? Sonny & Ais' original slash fiction series In the Company of Shadows. You've reached a site based on the original slash series In the Company of Shadows by Sonny & Ais. 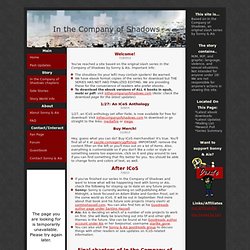 Important info: The shoutbox (to your left) may contain spoilers! Be warned. We have ebook format copies of the series for download but THE SERIES HAS NOT HAD FINALIZED EDITING. We are providing these for the convenience of readers who prefer ebooks. 1/27: An ICoS Anthology 1/27, an ICoS anthology set after Fade, is now available for free for download! Buy Merch! Hey, guess what you can do? After ICoS If you've finished our series In the Company of Shadows and want to know what will be happening next with Sonny or Ais, check the following for staying up to date on any future projects. Final chapters of In the Company of Shadows Be informed of newest story additions and changes to the site. We try to cycle out polls randomly below. Fiction by C. S. Pacat. I have some amazing news, and I'm so excited to share it with you all! 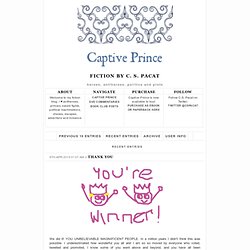 Captive Prince has been acquired . . . by Penguin. No, really. Penguin just bought Captive Prince. They're going to be releasing the entire trilogy and selling it in bookshops and everything. I didn't even know that Penguin had a romance/erotica imprint!!! Recent Entries. Kathara's original slash / yaoi recommendations. Recent Entries. Gay Authors Community Forums. Original Fiction. Original Stories Welcome to my assortment of original slash stories. 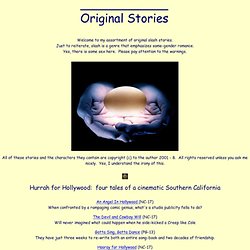 Just to reiterate, slash is a genre that emphasizes same-gender romance. Yes, there is some sex here. Please pay attention to the warnings. All of these stories and the characters they contain are copyright (c) to the author 2001 - 8. Hurrah for Hollywood: four tales of a cinematic Southern California An Angel In Hollywood (NC-17) When confronted by a rampaging comic genius, what's a studio publicity fella to do?

The Devil and Cowboy Will (NC-17) Will never imagined what could happen when he side-kicked a Creep like Cole Gotta Sing, Gotta Dance (PG-13) They have just three weeks to re-write both an entire song-book and two decades of friendship. In the Company of Shadows by Sonny & Ais. In the Company of Shadows DIRECTOR'S CUT and DOWNLOADING ICOS FOR FREE We are working our way through the series, editing and revising it, while splitting each book into two volumes. 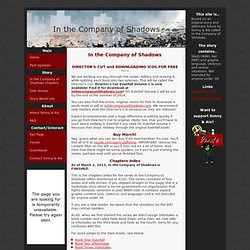