The Power of Fiction? Individuals and attitudes to poverty 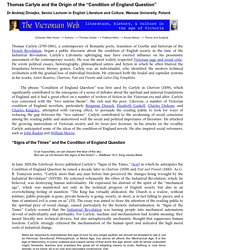 Carlyle’s Calvinistic upbringing may have exerted influence on his pessimistic assessment of the contemporary society. He was the most widely respected Victorian sage and social critic. He wrote political essays, historiography, philosophical satires and fiction in which he often blurred the boundaries between literary genres. Carlyle was an individualist, who identified the modern technical civilisation with the gradual loss of individual freedom. North and South Quotes by Elizabeth Gaskell. “I choose to believe that I owe my verylife to you--ay--smile, and think it an exaggeration if you will.I believe it, because it adds a value to that life to think--oh,Miss Hale! 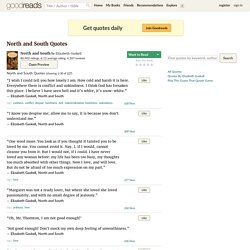 ' continued he, lowering his voice to such a tenderintensity of passion that she shivered and trembled before him,'to think circumstance so wrought, that whenever I exult inexistence henceforward, I may say to myself, "All this gladnessin life, all honest pride in doing my work in the world, all thiskeen sense of being, I owe to her! " And it doubles the gladness,it makes the pride glow, it sharpens the sense of existence tillI hardly know if it is pain or pleasure, to think that I owe itto one--nay, you must, you shall hear'--said he, steppingforwards with stern determination--'to one whom I love, as I donot believe man ever loved woman before.' He held her hand tightin his. He panted as he listened for what should come. ” ― Elizabeth Gaskell, North and South. Elizabeth Gaskell's Manchester. 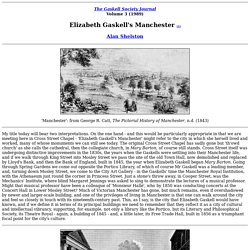 Catt, The Pictorial History of Manchester, n.d. (1843) My title today will bear two interpretations. On the one hand - and this would be particularly appropriate in that we are meeting here in Cross Street Chapel - 'Elizabeth Gaskell's Manchester' might refer to the city in which she herself lived and worked, many of whose monuments we can still see today. Charles Dickens as Social Commentator and Critic. Introduction ickens was not only the first great urban novelist in England, but also one of the most important social commentators who used fiction effectively to criticize economic, social, and moral abuses in the Victorian era. 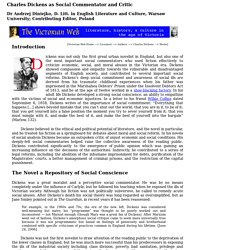 Dickens showed compassion and empathy towards the vulnerable and disadvantaged segments of English society, and contributed to several important social reforms. Dickens’s deep social commitment and awareness of social ills are derived from his traumatic childhood experiences when his father was imprisoned in the Marshalsea Debtors’ Prison under the Insolvent Debtors Act of 1813, and he at the age of twelve worked in a shoe-blacking factory. In his adult life Dickens developed a strong social conscience, an ability to empathise with the victims of social and economic injustices. Henry Mayhew. Henry Mayhew, the son of Joshua Mayhew, a London lawyer, and Mary Ann Fenn, was born on 25th November 1812. 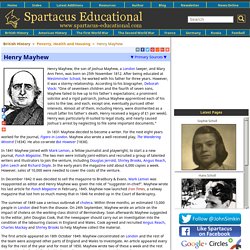 After being educated at Westminster School, he worked with his father for three years. However, it was a stormy relationship. Henry Mayhew (1812-87) London Labour and the London Poor by Henry Mayhew. Open a photograph album of Victorian London and you enter a strange twilight world. 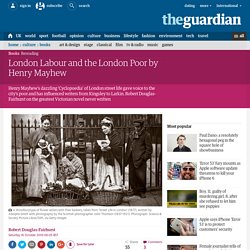 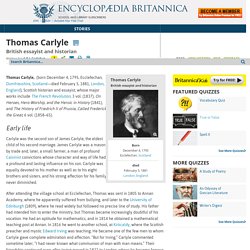 Early life Carlyle was the second son of James Carlyle, the eldest child of his second marriage. James Carlyle was a mason by trade and, later, a small farmer, a man of profound Calvinist convictions whose character and way of life had a profound and lasting influence on his son. Carlyle was equally devoted to his mother as well as to his eight brothers and sisters, and his strong affection for his family never diminished. The next years were hard for Carlyle. Marriage. On the origin of self-help. THE year 1859 was one of the more remarkable in publishing history. 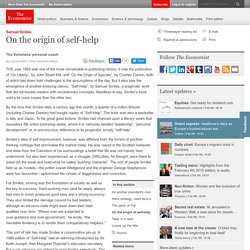 It saw the publication of “On Liberty”, by John Stuart Mill, and “On the Origin of Species”, by Charles Darwin, both of which laid down bold challenges to the assumptions of the day. But it also saw the emergence of another enduring classic: “Self-Help”, by Samuel Smiles, a pragmatic work that did not trouble readers with revolutionary concepts. Needless to say, Smiles's book sold a lot more copies than the other two. By the time that Smiles died, a century ago this month, a quarter of a million Britons (including Charles Darwin) had bought copies of “Self-Help”. The book was also a bestseller in Italy and Japan. History - Elizabeth Gaskell. Dickens Quote - Hard Times. BBC article.