How design fiction imagines future technology – Jon Turney. Picture yourself in a supermarket aisle in 2050. 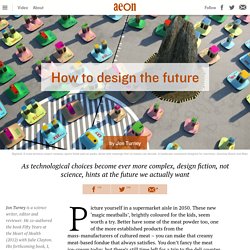 These new ‘magic meatballs’, brightly coloured for the kids, seem worth a try. Better have some of the meat powder too, one of the more established products from the mass-manufacturers of cultured meat – you can make that creamy meat-based fondue that always satisfies. You don’t fancy the meat ice-cream today, but there’s still time left for a trip to the deli counter, for some expensive, but delicious ‘rustic’ meat, matured in special vats, or perhaps some knitted steaks.

And you can pile your cart secure in the knowledge that no animals were harmed in the making of any of these offerings. At the moment, in vitro meat is a laboratory venture, yielding expensive and unappetising-looking muscle fibres that might be fit for filler in pies or burgers. Popular now. Tobias Revell: Critical Design / Design Fiction lecture finally written up. (loooooong) A month or so back I gave an overview lecture on critical design at Kingston University's design MA. 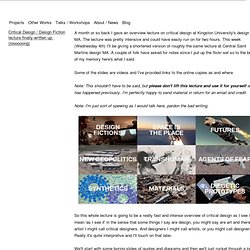 The lecture was pretty intensive and could have easily run on for two hours. This week (Wednesday 4th) I'll be giving a shortened version of roughly the same lecture at Central Saint Martins design MA. A couple of folk have asked for notes since I put up the flickr set so to the best of my memory here's what I said. Some of the slides are videos and I've provided links to the online copies as and where. Note: This shouldn't have to be said, but please don't lift this lecture and use it for yourself as has happened previously. Note: I'm just sort of spewing as I would talk here, pardon the bad writing. So this whole lecture is going to be a really fast and intense overview of critical design as I see it. You don't get critical design without Tony Dunne and Fiona Raby.

So you can read the book or you can turn to this handy manifesto which I find more useful. So, Dunne and Raby project one. The futures of the city. We can use the futures cone (via Tobias Revell) as a diagram to think about the future. 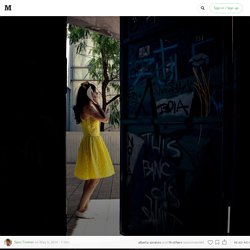 The further we get from today the more possibilities we have. If we keep on going like we are now, we’ll end up somewhere in the probable circle, but if we start to change our investments, research and regulations, we could move towards a more preferable way of living. The problem as always is the question: preferable for whom? For General Motors to sell more cars or for us to live in a pleasant neighbourhood? We can break through this limited view of the preferable future by challenging the major consensus narrative of how the future will unfold. The future is always over sold and under imagined — Chris Luebkeman One way of doing this is to develop more and vastly different scenarios, to throw in some wild cards — scenarios of low-probability and high-impact — and make it easier to think about and discuss a much wider set of possibilities. 2.

Urban IxD. How We Future. (since the following is un-screen-readably-long there is a pdf) I remember when a friend, Abby Mellick-Lopes, lent me Design Noir (2002) shortly after its publication. 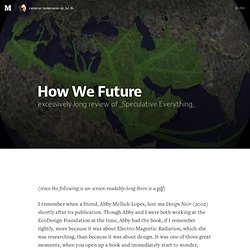 Though Abby and I were both working at the EcoDesign Foundation at the time, Abby had the book, if I remember rightly, more because it was about Electro-Magnetic Radiation, which she was researching, than because it was about design. It was one of those great moments, when you open up a book and immediately start to wonder, ‘What is this?’

The Novel and the Future of the Near Future. Last year was my first time at SXSW Interactive, which meant that in-between the relentless tweeting and swag avalanches I was able to attend Bruce Sterling’s annual closing rant. 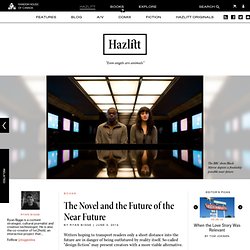 As is usual, he roamed through a dozen interconnected topics, but what stuck was a tangent about “paper novels.” (A phrase he said with the same curious disdain a millennial might reserve for “rotary phones.”) Bruce wasn’t rehashing the death of the novel—he’s way smarter than that. But he did suggest that speculative fiction (or whatever the au courant label is for science fiction about the near future) might be in critical condition. As one of the fathers of cyberpunk, Sterling has written a stack of paper novels.

I was reminded of Sterling’s rant as I read Alena Graedon’s recent novel The Word Exchange, another addition to the small but growing genre of smartphone dystopias that also includes Gary Shteyngart’s Upworthy-worthy Super Sad True Love Story.