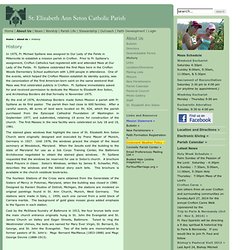 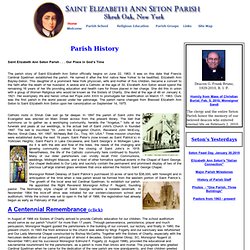 Our Place in God’s Time The parish story of Saint Elizabeth Ann Seton officially begins on June 22, 1963. It was on this date that Francis Cardinal Spellman established the parish. He named it after the first native New Yorker to be beatified, Elizabeth Ann Bayley-Seton. Catholic roots in Shrub Oak soil go far deeper. As it is with the ebb and flow of the tides, the needs of the changing and growing community called for the closing of Saint John’s in 1918. Monsignor Robert Delaney of Saint Patrick’s purchased 33 acres of land for $38,000, with foresight and in anticipation of the time when a new parish would be formed from the western portion of Saint Patrick’s. The growth of the local area led Cardinal Spellman, to establish our parish. A Centennial Remembrance (click) In August of 1966 six Sisters of Charity arrived to provide Catholic education for our children.

Pope John Paul II has said that a parish is "a family of families. " Seton 3. St. Elizabeth Ann Seton. Foundress and first superior of the Sisters of Charity in the United States; born in New York City, 28 Aug., 1774, of non-Catholic parents of high position; died at Emmitsburg, Maryland, 4 Jan., 1821. 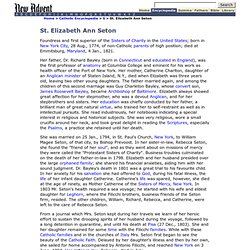 Her father, Dr. Richard Bayley (born in Connecticut and educated in England), was the first professor of anatomy at Columbia College and eminent for his work as health officer of the Port of New York. Her mother, Catherine Charlton, daughter of an Anglican minister of Staten Island, N.Y., died when Elizabeth was three years old, leaving two other young daughters. The father married again, and among the children of this second marriage was Guy Charleton Bayley, whose convert son, James Roosevelt Bayley, became Archbishop of Baltimore. Elizabeth always showed great affection for her stepmother, who was a devout Anglican, and for her stepbrothers and sisters. She was married on 25 Jan., 1794, in St. From a journal which Mrs. A time of great spiritual perplexity began for Mrs. Mr. Sources. St. Elizabeth Ann Seton Biography. Elizabeth Ann Seton. Elizabeth Ann Bayley Seton, S.C., (August 28, 1774 – January 4, 1821) was the first native-born citizen[1] of the United States to be canonized by the Roman Catholic Church (September 14, 1975).[2] She established the first Catholic school in the nation, at Emmitsburg, Maryland, where she founded the first American congregation of Religious Sisters, the Sisters of Charity. 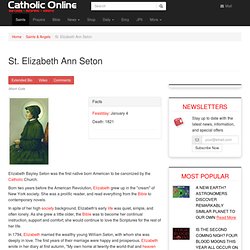