Art. Free textures, texture tutorials and texture inspiration collections from the web. 11 Extremely Useful Fresh Free Fonts. Looks like we almost let an entire month go by without finding some fresh free fonts for our readers. If you’ve been a WDL reader for while, you know that we take great pride in finding and letting you know about hight-quality freebies.

It’s all about making your life easier. We do the searching, so you can focus on what’s important – like creating amazing designs. So for this post, we’ve rounded up a fine collection of extremely useful free fonts for you to add to your design library. Yanukovych Captured? Anyone who claims that what took place in Ukraine had nothing to do with corruption simply believes propaganda and refuses to listen to reality. 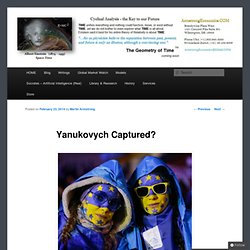 Yanukovych fled but he could not make it to an airport. It appears he went to Crimea and was trying to board a ship. According to reports we are getting from inside Ukraine, Yanukovych has been captured and is being sent back to Kiev. Ukraine Must Expel the Care-Taker Government And Start a New Path. The care-taker leaders are the typical bureaucrats who will destroy Ukraine and everything the people have fought for. 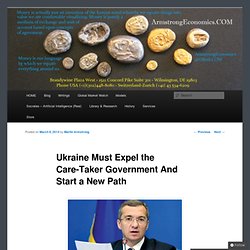 Oleksandr Vіktorovich Shlapak (Олександр Віталійович Шлапак) is the Ukrainian politician, bureaucrat, and the current Minister of Finance in Ukraine since February 27th. He offers NOTHING worthwhile for Ukraine and only thinks inside the BOX listening to economists with zero real-world experience and the IMF that is even more insane and worthless. Ukraine must expel these bureaucrats even though they may not be corrupt, they are old school. These people need to be banned from signing any economic deals for Ukraine. These bureaucrats are already following the IMF suggestions and are trying to introduce an economic austerity plan that will cut Ukrainian pensions of government workers from $160 to $80 so that Western bankers who lent money to Ukraine can be repaid at their loans.

Government debt is UNSECURED and is historically backed only by a political government. Ukrainian Gov’t is Fracturing – The Debt Default Contagion is Likely to Unfold. The Mayor of Kiev has distanced himself from Yanukovych. 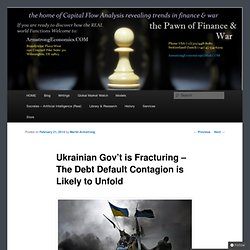 The Ukrainian parliament on Thursday passed a measure that would prohibit what Yanukovych has called his military “anti-terrorist operation” to restore order by sheer force, and called for all Interior Ministry troops to return to their bases. The politicians in Ukraine are running away from Yanukovych who is being seen simply as the entire problem and his dictatorial policy. Yanukovych claims to have reached a preliminary deal struck overnight that would see him lose some of his powers, and a “caretaker government” should be created in 48 hours that would include representatives of the opposition. Whether or not Yanukovych truly honor his word remains to be seen since he has placed his personal desires before the hood of his people.

He enacted a law making it 2 years in prison for more than 5 cars to follow each other after protesters first appeared at his residence before Independence Square was occupied. The US did NOT cause the Fall of the Soviet Union – that is a False Belief on Both Sides. There is a serious issue at the core of the USA-Russian renewed Cold War. 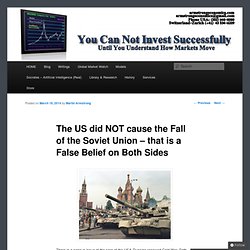 Both sides fail to understand how and why the Cold War ended. This is a profound problem that impacts both Russian and Western attitudes risking war in the future. This very common assumption that the West somehow succeeded in causing the collapse of the Soviet Union winning the Cold War is DEAD WRONG . Ukraine – Crimea Occuppied – Yanukovych Still Mentally in his Disneyland. Crimea has been severed and all roads into the region are now blocked. 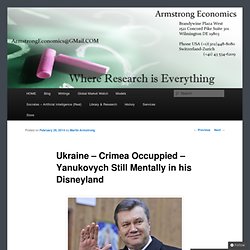 Pro-Russians seized the government and troops are pretending to be Ukrainian. Yanukovych made a press conference thanking Russia for his protection claiming he is still the President and any laws passed by the Ukrainian Parliament are not valid because he did not sign them. He claims he will remain the President for even the May elections are not valid. His argument seems to be Ukraine belongs to him and his sons to do as he likes. Yanukovych also claims he did not order troops to shoot citizens from sniper positions. Meanwhile, Switzerland has frozen about 20 accounts belonging to Yanukovych, his two sons, and other Ukrainian politicians. Nancy Pelosi goes for vacation in Hawaii using government jets and rents suites in excess of $10,000 a night.

Yanukovych Opens Fire of Civilians – the Trump Card is Always War. Yanukovych will go down in history as a ruthless criminal. 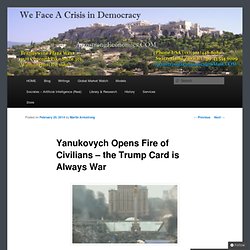 He has effectively ordered the massacre of civilians. Gun shots filled Independence Square and now more than 100 protesters have been murdered according to their reports. All out civil war is in motion and I fear that with this War Cycle turning up here in 2014, this incident will be the spark that ignites this cycle. YanukovychLeaks & Russia moves in to protect Crimea. Ukraine – The Update. The Ukrainian protesters are wisely demanding that Yanukovych immediately resign. 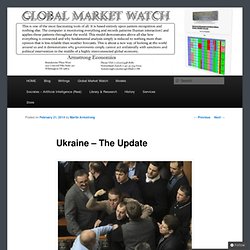 This ruthless dictator trying to stay until the end of the year is a joke. That is right out of how to politically oppress your adversary. Opinion & Speculation do not Cut It. COMMENT: “You don’t consider all the possibilities. 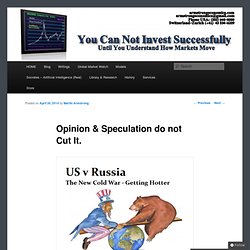 What if the USA has set in motion the revolution in Ukraine because they wanted and expected Russia to do exactly what Russia is doing. First the corruption of the prior President of Ukraine was revealed in the process and now Russia is being made to look like the aggressor in the eyes of the international community.” REPLY: It is a shame that such nonsense degrades the people of Ukraine and makes their suffering just some conspiracy plot not worthy of any respect and the people who have died deserve nothing – not even a mention.The Ukrainian people’s efforts and cries for freedom obviously fall upon deaf ears with this bullshit. No PLOT can move that many people to action and you know nothing about plots or coups verses real revolutions born of civil unrest. Ukraine – Doomed After the Olympics. According to a former adviser to Vladimir Putin, the economist Andrei Illarionov, the Kremlin will take one of three possible scenarios with respect to the Ukraine problem. 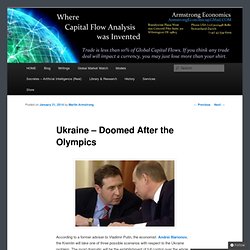 The most dramatic will be the establishment of full control over the whole Ukraine. Within the first half of February, Illarionov states that Russia will begin the total pressure on Ukraine, the purpose of which, will be to assert full control of Moscow over the country. According to Illarionov, within the next week, Russia will begin to assert a lot of pressure on Kiev. Moscow has resumed a reduced trade war with Ukraine and there has been an information war against Ukraine put out by the government. In particular, there is a delay at the border of Ukrainian goods moving into Russia for 10-15 days. Western Ukraine Declares Independence. Ukrainian President Viktor Yanukovich has demonstrated he is in the class with really war criminals. 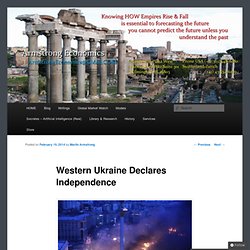 Ukraine the Truth. Hi Martin, can you please enlighten us on the damned truth. Do half of the people in Ukraine want the Eu, and the other half want Russia or, is this really a protest against government corruption or, both? Thanks ANSWER: Russia wants to portray this as a coup organized by the USA, Europe wants to portray this as Ukraine wanted them, and the USA media spins this as US against RUSSIA. This began as a movement against CORRUPTION and not a Europe v Russia confrontation. Ukraine – the Truth. I seem to be well read around the globe. If there is one position I am consistent on is that I have NEVER met with any government that is honest or for the people regardless of its declared stance – it is always about their own self-interest. Governments, of every variety, are only interested in maintaining their own power at all costs.

To our many Russian readers, be very careful not to mix nationalism with facts and by no means credit the United States for power it wished it had, but lacks no different from Russia. One comment from a Russian reader explains the likewise bias of pro-Russia that is equally dangerous as being pro-American. Open your mind and take in the facts – this is not a sports game rooting for one team v another. Ukraine Maybe The Most Important Country To Watch. The history of Ukraine is incredibly important in the entire Cycle of War. A full update on the Cycle of War is just about ready.

Kiev was originally the first capital of Russia that was invaded and destroyed by the Mongols in 1240. It took nearly 100 years later for Moscow to rise as a city. All that remains of the ancient capital of Kiev is the ruins known as the Golden Gate constructed during the 11th Century. Contacts on the ground inside Kiev and outside are reporting interesting trends. The Internal Battle Within Ukraine – Strategically Quite Important. Ukraine – The Funding Begins – Gun Shots Starting in Kiev.