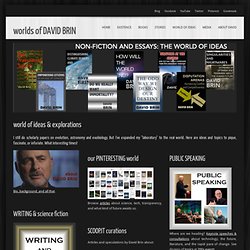 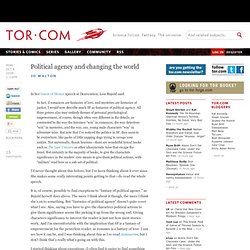 All three genres also may embody themes of personal psychological empowerment, of course, though often very different in the details, as contrasted by the way the heroines “win” in romances, the way detectives “win” in mysteries, and the way, say, young male characters “win” in adventure tales. But now that I’ve noticed the politics in SF, they seem to be everywhere, like packs of little yapping dogs trying to savage your ankles. Not universally, thank heavens—there are wonderful lyrical books such as The Last Unicorn or other idiosyncratic tales that escape the trend. But certainly in the majority of books, to give the characters significance in the readers’ eyes means to give them political actions, with “military” read here as a sub-set of political.

Three Tips For Creating a Brand New Alien Planet from Scratch. Evan Selinger: What Sci-Fi Can Teach Us About the Present and Future of Information. Combine growing attachment to smartphones with advances in cutting-edge goggles (think Google Glass), and what do you get? 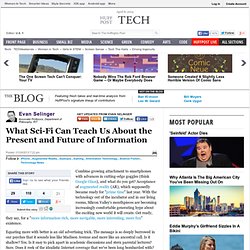 Acceptance of augmented reality (AR), which supposedly became ready for "prime time" last year. With the technology out of the incubator and in our living rooms, Silicon Valley's mouthpieces are becoming increasingly comfortable generating hype about the exciting new world it will create. Get ready, they say, for a "more information-rich, more navigable, more interesting, more fun" existence. Equating more with better is an old advertising trick. The message is so deeply burrowed in our psyches that it sounds less like Madison Avenue and more like an ancestral call. Persuasive jingles need desirable products, or at least evocative references to them. With so many changes to look forward to, Evernote CEO Phil Libin speculates that soon it will seem "seem barbaric" to look at the world without AR lenses. 20 Essential Books About the Next Step in Human Evolution. 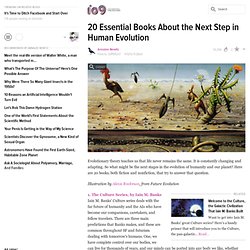 Natural (as in, not being directed by humans or a third party. It seems many of the examples on this list are not of the natural sort) evolution is something that one can't really predict. A species (or if you want to nitpick, a population of a species) evolves when environmental conditions demand it. Firefly & Lessons in Contract Law. Firefly was wickedly creative, well-written and had fantastic humor. Aircraft Carriers in Space - By Michael Peck. Last month, Small Wars Journal managing editor Robert Haddick asked whether new technology has rendered aircraft carriers obsolete. 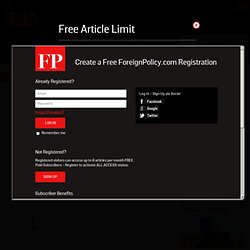 Well, not everyone thinks so, especially in science-fiction, where "flat tops" still rule in TV shows like Battlestar Galactica. So FP's Michael Peck spoke with Chris Weuve, a naval analyst, former U.S. 12 Greatest Time Travel Effects from Movies and Television. How could you leave out Primer and 12 Monkeys in favor of including two of The Time Machine? 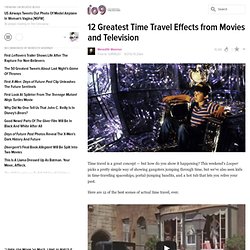 What was the time travel that you saw in 12 Monkeys. I saw lots of preparation, no actual travel. I'll explain, but first: five time travel effects scenes that are better than the second Time Machine and the Butterfly Effect (which isn't a bad choice): 10 Visual Motifs that American Science Fiction Borrowed from Anime. A few notes. 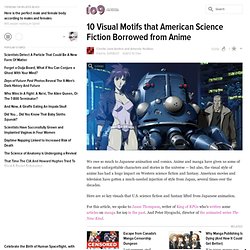 Cronenberg's "Scanners" is probably the original power-up movie. Dated: 1981 (7 years before "Akira" the movie and a year before "Akira" the manga), it ends in a slow-motion sequence of bursting veins, screaming, flaming energy, and exploding body parts which was adopted in Anime much later. John Woo is notable for his use of slow-motion and while not the originator, he's obviously the heaviest influence on the action genre — far more than anime. It's a little weird to point out that Ridley Scott created the dystopic neo-city visual aesthetic...and then turn around and give credit to the people who BORROWED FROM HIM.

The "bolt of energy" was probably first used by Gene Roddenberry in Star Trek. A decent predecessor to the cyborg woman used in anime is Maria's doppelganger from Fritz Lang's Metropolis (complete with the signature "bob" haircut). FireflyShipWorks. I couldn’t be more thrilled to (finally) announce (and reveal the big secret I’ve been hinting at for over a week) QMx’s most ambitious project to date: The Complete and Official Map of the Verse.

Over two years in the making, the Map of the Verse measures 25 inches by 38 inches and is printed on both sides of a sheet of 65 lbs cover stock (believe me, we needed the space). It documents the names, positions, sizes, populations and other never-before-published details of the 215 terraformed planets and moons orbiting the five star systems that comprise The Verse of Joss Whedon’s Firefly and Serenity. How 2000 A.D. Changed Science Fiction Forever. Controversial SciFi Realist Tells io9 Why Warp Drives Suck. How to Write a Killer Space Adventure Without Breaking the Speed of Light. Me and Abraham, man. 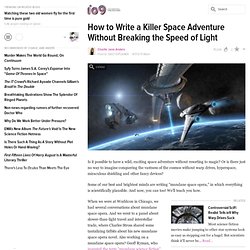 That dude knows what's up. Science fiction doesn't sell because it's largely fucking boring these days. These bros listed above are the purveyors of boring shit and they would like others to bring their stuff down to that same level of boring. It's like an infomercial, "Become 300% less interesting - ask me how! " You know where dynamic, interesting sci-fi is being written these days? As an aside to this rant, there's some beautiful epic fantasy being written in the romance space, too. I sometimes feel like the sci-fi genre has in the past ten years headed determinedly up its own ass, do not pass Go, do not collect $200. Kenya uses a science fiction book to teach children ethnic tolerance. 10 of Science Fiction's Most Depressing Futuristic Retirement Scenarios. Science Fiction's Greatest Failures (And How They Saved Us All)

"At the time 'Fall Out' [the final episode] was first broadcast there were only three television channels available in the UK and the long-awaited final episode of the series had one of the largest ever viewing audiences seen until then for a television programme. 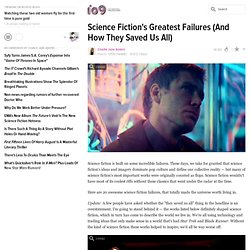 " - Wikipedia ( Yeah, I'm going to have to join a chorus, here: so far as I know, The Prisoner was a massive success in its native markets (Britain and Canada) and did fairly well elsewhere with the possible exception of the United States—where, if I recall correctly, it was initially picked up by CBS as a filler show.

(It later earned its cult following here mostly through subsequent syndication to PBS affiliates—again, if I'm remembering correctly.) I think the show earned back its money. It was very expensive to produce. A Vocabulary for Speaking about the Future. Science fiction writers and fans are prone to lauding the predictive value of the genre, prompting weird questions like ‘‘How can you write science fiction today? 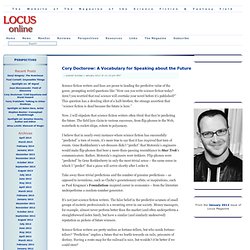 Aren’t you worried that real science will overtake your novel before it’s published?’’ This question has a drooling idiot of a half-brother, the strange assertion that ‘‘science fiction is dead because the future is here.’’ Now, I will stipulate that science fiction writers often think that they’re predicting the future. The field lays claim to various successes, from flip-phones to the Web, waterbeds to rocket-ships, robots to polyamory. Why Science Fiction Movies Drive Me Nuts. My friends (and especially my wife) all understand that I’m the wrong guy to take to a big budget science fiction movie. I will freely admit that this is the case. Every summer, as I sit down in one darkened cave after another to eat candy and watch some very expensive polygons interact with another bunch of very expensive polygons, I find myself swirling with a curious and unpleasant mix of emotions. Last week, we saw the latest Spider-Man reboot (I’m writing this in mid-summer of 2012), and as I left the cinema in quite a curmudgeonly mood, I thought I’d try and explain what I was feeling during and after the movie.

David Brin's Existence will make you think about the future a whole new way. 10 Greatest Science Fiction and Fantasy Romantic Comedies of All Time. Ray « Mike's Meandering Mind. I remember an interview a long time ago with Ray Bradbury. He told a story — and I may be remembering this badly — of seeing a show at a carnival. The showman pointed at him and said, “Live Forever!” He almost did. He died yesterday at 91. And how apropos it happened after a transit of Venus. There has been a lot said about the man — his amazing combination of optimism and pessimism about the future; his ability to get to our deepest fears and our highest hopes, often at the same time. But, to me, the one thing that Bradbury was best at was evoking that feeling of youth — of recalling those endless summer days when you could run forever and feel the pure magic of being alive. “I want to see it all again. And later, before she jumps the time ship to stay in the past: “No, I just want to be inside.

The Curious Art of Science Fiction Road Maps. Uchronia: The Alternate History List. Blame Asimov's: My 10 Favorite Alternate History Stories. Though my kids are mostly too young to stay up for , we occasionally watch parts of the show online. Currently, their favorite is the Timecrowave sketch. They love it, not the least of which because of the Nazis, the giant cat at the end, and the talk about danger to the space/time continuum.

Their interest in the sketch started me thinking about alternate history stories in general. Daily 10 News, Videos, Reviews and Gossip - io9. Would You Give Up Your Privacy to Live in Utopia? I think the Star Trek version of utopia is the closest to getting it right, mainly because it strikes a nice balance between letting people get on with living their lives, while simultaneously doing away with two of the biggest causes of misery and social striation in modern society; money and the need for material possessions. The existence of replicators immediately eliminates 99% of our physical needs, and renders money (mostly) useless. Just plug it in, and you never have to worry about hunger, thirst, clothing, or not having enough "stuff" again.

Real and fictional technologies that aim to find your perfect mate. Novels that Could Help You Prepare for a Future Pandemic. Science Fiction blogs (Eng) Top 100 Science Fiction Blogs. By Kelsey Allen Science fiction works tend to engender an enthusiastic following in the academic and literary world. Whether you’re interested in books, movies, TV, or a little bit of everything, you’ll find what you’re looking for in one of the Internet’s many science fiction blogs. Star Wars. Decade-long apocalyptic game of Civilization II inspires some very cool fan fiction.

What the New Yorker and Tin House science fiction issues tell us about the state of SF. The Essential Posthuman Science Fiction Reading List. Another Word: Dear Speculative Fiction, I’m Glad We Had This Talk by Elizabeth Bear. The Victorian Hugos: 1891. April Books: Stephen King's Dark Tower, Neal Stephenson's Weird History, and More! Science Fiction and Fantasy Books You Can't Afford to Miss in May. What is retro futurism? See the neck implants of Ender's Game's teenage army.

Relationship Secrets from Science Fiction and Fantasy. Why Mass Effect is the Most Important Science Fiction Universe of Our Generation. Why you shouldn’t bet on digital immortality. Across the Universe: A Wrinkle in Time Revisited. The 10 Best Comedic Science Fiction Films According to Me. David J. Williams' AUTUMN RAIN TRILOGY — The World of 2110 — Geopolitical Overview.