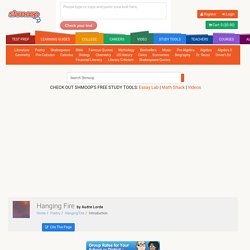 " Now that is one heck of a self-description. We have a feeling we'd have liked to share a meal—or maybe, like, 12 meals—with Ms. Lorde. As you might have already guessed, Audre Lorde was known as much for her political activism as for her poetry. Indeed, political activism was a major part of her poetry. Don't believe us? In "Hanging Fire," Lorde does just that. Now, this poem may not seem so far out there to us today—we've all had our adolescent complaints, haven't we?

Even though "Hanging Fire" is not one of Lorde's most overtly political poems, the very fact that Lorde shares the inner life of a young woman with her readers is a powerful political statement in and of itself. Now this is a philosophy we can get on board with. Black Arts - Agee Poetry Project. Learning Recitation: Madison Niermeyer reads 'I am Waiting' by lawrence Ferlinghetti. Annotation for "I am Waiting" by Oliver Rios on Prezi. Short Stories of the Civil Rights Movement: An Anthology. Top 10 Civil Rights Protest Songs Of All Time. 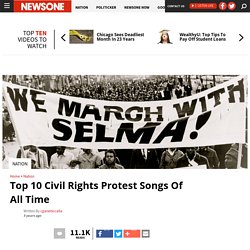 The Civil Rights movement incorporated jazz, folk, R&B and gospel to use music that everybody could relate to and be inspired by to help change America in the 1950s and 1960s. 10. Oh Freedom “Oh Freedom” harkened back to the slave days with phrase “Before I’ll be a slave, I’ll be buried in my grave, and go home to my Lord and be free,” inspiring the call for freedom in the Civil Rights movement. 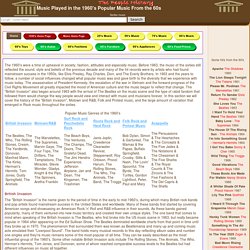 Jazzinamerica. MicrosoftWord-Cruz-Dr.Kingvs.pdf. Malcolm x - documents. A Brief Guide to the Black Arts Movement. Sixties Project: Poetry Archive. The Sixties - Beats and Counter Culture. Writers History - Beat Generation. Beat Generation The Beat Generation was a literary movement that began in the early 1950s and ended in the 1960s in the USA. 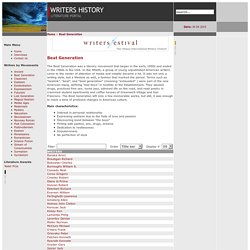 In the fiftieth, a group of young unpublished American writers came to the center of attention of media and instatly became a hit. It was not only a writing style, but a lifestyle as well, a fashion that marked the period. The Sixties . Timeline . Text Version. This timeline offers a sample of newsworthy happenings from the 1960s. 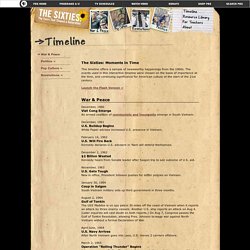 The events used in this interactive timeline were chosen on the basis of importance at the time, and continuing significance for American culture at the start of the 21st century. War & Peace December, 1960 Viet Cong Emerge. Lisa Law: Introduction. Lisa Law's story is one among thousands that emerged from American society in the turbulent 1960s. 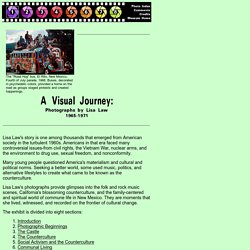 Americans in that era faced many controversial issues-from civil rights, the Vietnam War, nuclear arms, and the environment to drug use, sexual freedom, and nonconformity. Many young people questioned America's materialism and cultural and political norms. Seeking a better world, some used music, politics, and alternative lifestyles to create what came to be known as the counterculture. The Sixties . Resource Library. Digger Papers 68. In the summer of 1968, the Diggers produced their final collective publication and gave it away as a gift to the world. 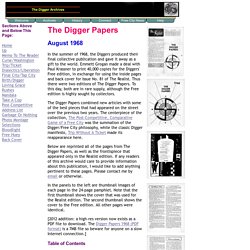 Emmett Grogan made a deal with Paul Krassner to print 40,000 copies for the Diggers' Free edition, in exchange for using the inside pages and back cover for Issue No. 81 of The Realist. Thus there were two editions of The Digger Papers. To this day, both are in rare supply, although the Free edition is highly sought by collectors. Ch%2031%20sect%201%20Counterculture.pdf. Counterculture. Flower Power. Make love, not war. 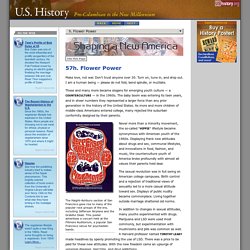 Don't trust anyone over 30. Turn on, tune in, and drop out. I am a human being — please do not fold, bend spindle, or mutilate. These and many more became slogans for emerging youth culture — a counterculture — in the 1960s. The 1960s. The optimistic ‘60s went sour in 1968. 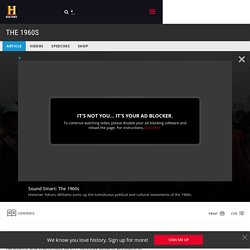 That year, the brutal North Vietnamese Tet Offensive convinced many people that the Vietnam War would be impossible to win. The Democratic Party split, and at the end of March, Johnson went on television to announce that he was ending his reelection campaign. (Richard Nixon, chief spokesman for the silent majority, won the election that fall.) Martin Luther King Jr. and Bobby Kennedy, the two most visible leftists in American politics, were assassinated. Police used tear gas and billy clubs to break up protests at the Democratic National Convention in Chicago. The 1960s. What’s That Sound? Teaching the 1960s through Popular Music. Norton Anthology of American Literature: W. W. Norton StudySpace. The Counterculture of the 1960s. The 1960s were a period when long‐held values and norms of behavior seemed to break down, particularly among the young. 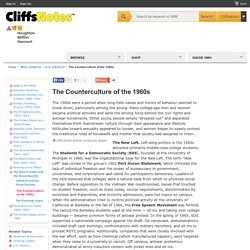 Many college‐age men and women became political activists and were the driving force behind the civil rights and antiwar movements. Other young people simply “dropped out” and separated themselves from mainstream culture through their appearance and lifestyle. Attitudes toward sexuality appeared to loosen, and women began to openly protest the traditional roles of housewife and mother that society had assigned to them. The New Left. Left‐wing politics in the 1960s attracted primarily middle‐class college students. In the first six months of 1968, more than 200 major demonstrations took place at 100 colleges and universities across the country, involving more than 40,000 students. Hippies. American Poetry, 1945-1990: The Anti-Tradition. (The following article is taken from the U.S. Department of State publication, Outline of American Literature.) American Poetry, 1945-1990: The Anti-Tradition By Kathryn VanSpanckeren Traditional forms and ideas no longer seemed to provide meaning to many American poets in the second half of the 20th century.

Events after World War II produced for many writers a sense of history as discontinuous: Each act, emotion, and moment was seen as unique. Master Players in a Fixed Game: An Extra-Literary History of Twentieth ... - Ralph D. Story. African American Protest Poetry, Freedom's Story, TeacherServe®, National Humanities Center. African American Protest Poetry Trudier Harris J. Carlyle Sitterson Professor of English, Emerita University of North Carolina National Humanities Center Fellow ©National Humanities Center Overview Given the secondary position of persons of African descent throughout their history in America, it could reasonably be argued that all efforts of creative writers from that group are forms of protest.

However, for purposes of this discussion, Defining African American protest poetrysome parameters might be drawn. Since this category is so large, three arenas of protest poetry will constitute its parameters. Protesting against slavery came easily to most African American writers who took up pens before 1865. Among protestor poets during slavery, scholars debate about the extent to which Phillis Wheatley, the first published African American poet (publishing in the 1760s and 1770s), should be included in that category. Perhaps Dunbar’s reasons for looking back were similar. Scholars Debate 27 W. African American literature. Lesson Plan: Interpreting 'Howl' in the 21st Century. Overview | How can poetry both reflect and transcend the era in which it is written? How can looking at a poem from multiple perspectives illuminate its meaning? In this lesson, students consider a film about Allen Ginsberg’s “Howl,” study the poem and express their ideas about poetry, their generation and life in writing and on film.

American Passages - Unit 15. Poetry of Liberation: Context Activities. Activities: Context Activities. The Beat Generation. Like the French Impressionist artists of Paris, the Beat writers were a small group of close friends first, and a movement later. The term "Beat Generation" gradually came to represent an entire period in time, but the entire original Beat Generation in literature was small enough to have fit into a couple of cars (at times this nearly happened). Beat Poets. Literature. The Influence of the 60s and Psychedelic Music and Culture on Modern Society.

2005-02-60s-ext.pdf. University of Virginia Library Online Exhibits. Cultural Expressions in the 1960s. Culture in The 1960s. Glossary of Poetic Terms : Learning Lab. Unit15ig. 06.03.04: Voices of the Sixties and the Modern Poetry Slam. Introduction The more I teach middle school English and the older I get, the more I realize how difficult it is to bridge what so many cited as a major social problem in the sixties; the "generation gap. " As an adult trying to reach middle school age students in a world that is quite different than the one I grew up in, I am constantly remembering those days when as a youngster, I proclaimed that the adults just didn't "get it.

" They simply didn't understand. Now that I am the adult and a teacher, no less, children undoubtedly are feeling the same way as I did about adults during my adolescence, so I am always searching for ways to understand or to reach my students.