How to include LGBTQ (or LGBTIA) in your school library collection. Image sourced from (Creative Commons) Over the past year or so I have read and been made aware of some fantastic LGBTQ (or LGBTQIA or whichever acronym your choose to use) fiction. 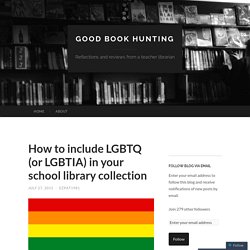 I really believe in ensuring that libraries, especially school libraries, have an inclusive collection, especially when it comes to fiction. Most libraries are very good at that. We have books on different cultural backgrounds, books on disability, books on various belief systems and that is fantastic. Often we are aware of our student backgrounds because it is physically obvious or because we know from school enrolment data. Glbti_teacher_ref_feb2014.pdf. ChnsLit - OurResourceLists. Welcome to Rainbow Rumpus! Cool Sites for Students - Teacher Resource Centre. To My Year 7 Self - Sarah. Dear My Year 7 Self: Now year 7’s not the best year of your life. 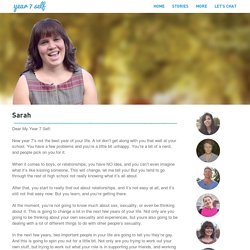 A lot don’t get along with you that well at your school. You have a few problems and you’re a little bit unhappy. 2014 Rainbow List « Rainbow Books. The Rainbow Project, a product of the ALA Gay, Lesbian, Bisexual, and Transgender Round Table (GLBTRT) and Social Responsibilities Round Table (SSRT), proudly announces the 2014 Rainbow List.Â The Rainbow List is a bibliography of books with significant gay, lesbian, bisexual, or transgender content, and which are aimed at youth, birth through age 18. 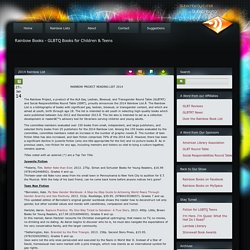 The list is intended to aid youth in selecting high-quality books which were published between July 2012 and December 2013.Â The list also is intended to aid as a collection development or readerâ€™s advisory tool for librarians serving children and young adults. The committee members evaluated over 150 books from small, independent, and large publishers, and selected thirty books from 25 publishers for the 2014 Rainbow List. Titles noted with an asterisk (*) are a Top Ten Title. Juvenile Fiction *Federle, Tim. Teen Non Fiction. LGBT Graphic Novels: Recommendations for Teens & Young Adults. Good Graphic Novels for school libraries, teenagers and a Young Adult audience… with GLBTQ themes? 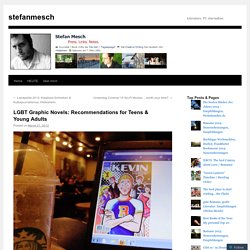 Glen Weldon On LGBT Characters In Graphic Novels. The Heart of Thomas, by Moto Hagio, was one of the first Japanese comics to deal with same-sex relationships. 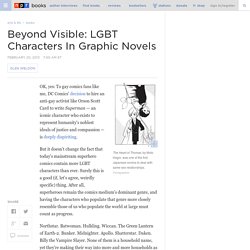 Fantagraphics hide caption itoggle caption Fantagraphics The Heart of Thomas, by Moto Hagio, was one of the first Japanese comics to deal with same-sex relationships. Fantagraphics OK, yes: To gay comics fans like me, DC Comics' decision to hire an anti-gay activist like Orson Scott Card to write Superman — an iconic character who exists to represent humanity's noblest ideals of justice and compassion — is deeply dispiriting. But it doesn't change the fact that today's mainstream superhero comics contain more LGBT characters than ever.

Northstar. But visibility is a first step. Advocacy, Legislation & Issues. The library is a place were everyone belongs! 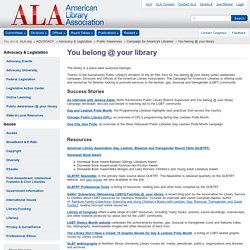 Thanks to the Sacramento Public Library's donation of the art files from its You belong @ your library public awareness campaign, Divisions and Offices of the American Library Association, The Campaign for America's Libraries is offering tools and resources for libraries looking to promote services to the ​lesbian, gay, bisexual and transgender (LGBT) community. Success Stories An interview with Jessica Zaker, North Sacramento Public Library Branch Supervisor and You belong @ your library campaign developer, discuss successes in reaching out to the LGBT community. Gay and Lesbian Pride Month, the Programming Librarian highlights best practices from across the country. Chicago Public Library (CPL), an overview of CPL's programming during Gay Lesbian Pride Month.

Lambda Literary. Reviews of fiction of interest to LGBTQ teens. James Klise, April 2014. Sophomore tennis player Saba Khan is devastated when a fire destroys her family’s West Rogers Park apartment. Saba goes to private school, and the other students and their families rally around her, offering their help to get her back on her feet. The school decides to hold an auction to benefit the Khan family, and in the process, siblings Kevin and Kendra Spoon find artwork in an alley. The art turns out to be lost works by Henry Darger, and is worth at least half a million dollars. Then it disappears. How our children's book about a gay superhero avoided the straightwash. In the world of Las Anclas – Los Angeles in the far future – some people have mutant powers, squirrels can teleport sandwiches out of people’s hands, and deadly crystal trees take their bright colours from the clothes of the people they killed. 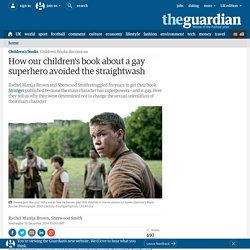 This is the setting for our new book, Stranger. It’s a world full of danger and beauty, where there’s sometimes bias against the mutated “changed” folk, but other types of prejudice have completely died out. Nobody cares what race you are, what your gender is, or what your religion is, any more than they care if you’re a boy who prefers to date boys, or a girl who falls in love with other girls. One of the main characters is Yuki Nakamura. He was once the crown prince of a floating city, but that was years before the story begins. Yes. What are the best LGBT books for children, teenagers and YAs?