Fan Fiction in the News

The FanFiction Project with Tea-Berry Blue. Master of the Universe versus Fifty Shades by E.L James Comparison. Introduction On Saturday, March 10, 2012, New York Times reported that Vintage, a literary imprint of Random House, had won the rights to republish on a large scale the ebook bestseller trilogy: 50 Shades of Grey, 50 Shades of Darker, and 50 Shades of Freed. 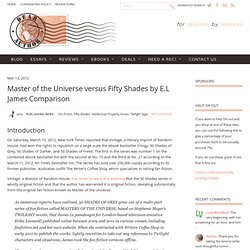 The first in the series was number 1 on the combined ebook bestseller list with the second at No. 15 and the third at No. 21 according to the March 11, 2012, NY Times bestseller list. The series has sold over 250,000 copies according to its former publisher, Australian outfit The Writer’s Coffee Shop which specializes in selling fan fiction. Vintage, a division of Random House, has come forward and asserted that the 50 Shades series is wholly original fiction and that the author has warranted it is original fiction, deviating substantially from the original fan fiction known as Master of the Universe.

Vintage defended “50 Shades” as an original creation with a passionate following. Percentage Comparison “Um. Turnitin Textual Comparison. Fan Fiction Has a Bad Name, But Do People Really Understand What It Is? About the HNAD Project - HoloNet Audio Dramas. The fact is, fan fiction has existed since the first story was retold. February 16, 2014 By Hugh Howey Slate If these are the end times for literature, then we must be traveling in circles, for the death of storytelling looks an awful lot like its birth. 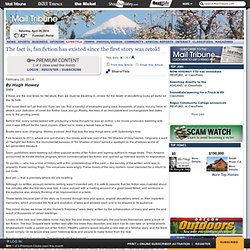 The novel itself isn't all that old. Sure, we can find a handful of examples going back thousands of years, but you have to stretch your definition of novel the further back you go. Before that, every scribe tasked with producing a tome thought he was an author. Books were ever-changing. Fast forward to 2012, where one out of every five books sold was part of the "50 Shades of Grey" series. Soon, publishers were seeking out other popular works of fan fiction and signing authors to mega deals. To purists — who mix a love of history with a thin understanding of the past — the sanctity of the written word was in jeopardy.

And yet — that is precisely where we are heading. The Vampire Diaries Is Undead. J.K. 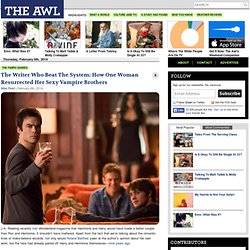 Rowling recently told Wonderland magazine that Hermione and Harry would have made a better couple than Ron and Hermione. It shouldn’t have mattered. Apart from the fact that we’re talking about the romantic lives of make-believe wizards, not only would Roland Barthes yawn at the author’s opinion about her own work, but the fans had already paired off Harry and Hermione themselves—nine years ago.

But the opinions of authors can’t help but feel more canonical than the things we internet denizens dream up ourselves—particularly when you take into account the connotations that the term "fan fiction" carries for most people. L.J. But one unique quirk sets Smith’s work apart from most fanfic. Smith's authorship lends her new work an unusual and hard to comprehend status: It's the first work of unofficial-official canon.

Lisa Jane Smith, Vampire Queen Lisa Jane Smith is famous for her young adult novels about witches, psychics, and, most of all, vampires. Rowling backs Potter fan fiction. Harry Potter author JK Rowling has given her blessing to fans who write their own Potter stories online. 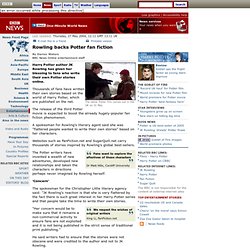 Thousands of fans have written their own stories based on the world of Harry Potter, which are published on the net. The release of the third Potter movie is expected to boost the already hugely-popular fan fiction phenomenon. A spokesman for Rowling's literary agent said she was "flattered people wanted to write their own stories" based on her characters. Websites such as FanFiction.net and SugarQuill.net carry thousands of stories inspired by Rowling's global best-sellers. The Potter writers have invented a wealth of new adventures, developed new relationships and taken the characters in directions perhaps never imagined by Rowling herself. 'Concern' The spokesman for the Christopher Little literary agency said: "JK Rowling's reaction is that she is very flattered by the fact there is such great interest in her Harry Potter series and that people take the time to write their own stories. 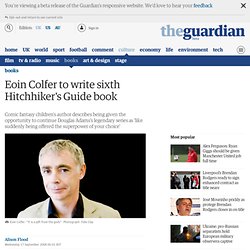 And Another Thing… by Colfer, whose involvement with the project was personally requested by Belson, will be published next October by Penguin. No information has yet emerged about the plot of the novel but Hitchhiker fans will be hoping for a resurrection of much-loved characters Arthur Dent, Trillian and Ford Prefect, who were all apparently blown to smithereens at the end of the fifth novel, Mostly Harmless. Adams himself had plans for a sixth Hitchhiker book, saying in an interview: "People have said, quite rightly, that Mostly Harmless is a very bleak book. And it was a bleak book. I would love to finish Hitchhiker on a slightly more upbeat note, so five seems to be a wrong kind of number, six is a better kind of number. "