Bustle. With a brand new year almost upon us, it’s time for TV-obsessed fans such as ourselves to look back and reflect on all that has happened in the television industry throughout the passing year. 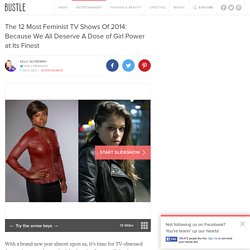 And boy-oh-boy, what a year it has been, especially for the vast array of equally dynamic and diverse female characters. That’s right, folks, 2014 has produced some of the best TV shows for women the world has ever seen before — highlighting strong, independent ladies we’ve all come to admire and respect. Basically, what I’m trying to say here is that there are a ton of shows out there more than worthy of your time. So if you have yet to see any of these series — whether they’ve been on the air for years or only a few months — trust me when I tell you they are must-see gems that deserve top priority on your New Year’s binge-watching list. Images: Craig Sjodin/ABC; BBC America. Reproduction and pregnancy in speculative fiction.

Because speculative genres explore variants of reproduction, as well as possible futures, SF writers have often explored the social, political, technological, and biological consequences of pregnancy and reproduction. 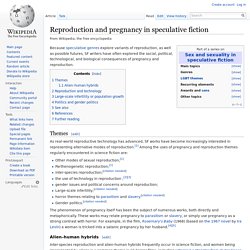 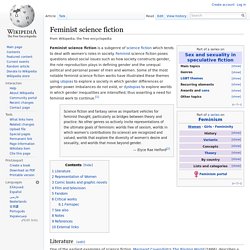 Feminist science fiction poses questions about social issues such as how society constructs gender, the role reproduction plays in defining gender and the unequal political and personal power of men and women. Some of the most notable feminist science fiction works have illustrated these themes using utopias to explore a society in which gender differences or gender power imbalances do not exist, or dystopias to explore worlds in which gender inequalities are intensified, thus asserting a need for feminist work to continue.[1] Science fiction and fantasy serve as important vehicles for feminist thought, particularly as bridges between theory and practice. Literature[edit] One of the earliest examples of science fiction, Margaret Cavendish's The Blazing World (1666), describes a utopian kingdom ruled by an empress. 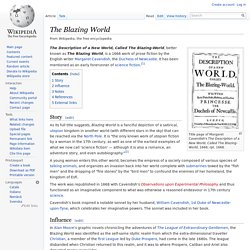 The Description of a New World, Called The Blazing-World, better known as The Blazing World, is a 1666 work of prose fiction by the English writer Margaret Cavendish, the Duchess of Newcastle. It has been mentioned as an early forerunner of science fiction.[1] Story[edit] As its full title suggests, Blazing World is a fanciful depiction of a satirical, utopian kingdom in another world (with different stars in the sky) that can be reached via the North Pole. It is "the only known work of utopian fiction by a woman in the 17th century, as well as one of the earliest examples of what we now call 'science fiction' — although it is also a romance, an adventure story, and even autobiography Cavendish's book inspired a notable sonnet by her husband, William Cavendish, 1st Duke of Newcastle-upon-Tyne, which celebrates her imaginative powers. Influence[edit] 15 Great Feminist Shows to Watch Now  The Golden Girls was a historic show: four central characters, all female and all over the age of 60! 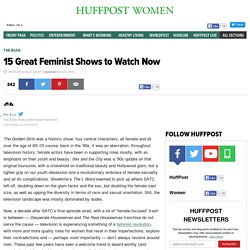 Of course, back in the ‘80s, it was an aberration: throughout television history, female actors have been in supporting roles mostly, with an emphasis on their youth and beauty. Sex and the City was a ‘90s update on that original foursome, with a chokehold on traditional beauty and Hollywood glam, but a lighter grip on our youth obsession and a revolutionary embrace of female sexuality and all its complications. Showtime’s The L Word seemed to pick up where SATC left off, doubling down on the glam factor and the sex, but doubling the female cast size, as well as upping the diversity in terms of race and sexual orientation. Still, the television landscape was mostly dominated by dudes.