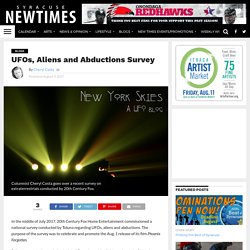 The purpose of the survey was to celebrate and promote the Aug. 1 release of its film Phoenix Forgotten. Before we get to the statistics, let’s briefly review a bit of history about the Phoenix lights. Around 7:30 p.m. a series of stationary lights appeared over a space of 300 miles, starting around the Nevada state line, moving southeast over Phoenix and continued toward regional Tucson.

Eyewitnesses were reported to have observed and videotaped a craft estimated to be several football fields long in length. Of course, the sighting event caused a great deal of public concern and controversy. The Phoenix lights sighting event was used as a backdrop for a fictional modern alien abduction horror movie. 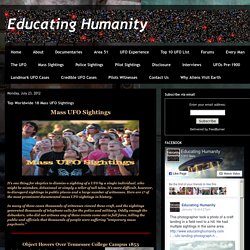 This case is perhaps the most important mass UFO sighting and vehicle interference events in the United States. On the evening of November 2, 1957, Patrolman A. J. Fowler, officer on duty at Levelland, Texas, received the first of several strangely similar phone calls. The Kecksburg UFO Crash - 1965 9. Westfall UFO Encounter, 200 Students Australia-1966 10. This is one of the most compelling UFO cases on record, it has been referred to as Australia's Roswell. Portage County Police Chase - 1966 11. The Hudson Valley, New York Incident -1983 12. The Belgium Wave - 1989-1990 14. 62 Children See UFO & Aliens - Africa - 1994 15. This happened three times and then they started to move down towards the school with one of them landing (or hovering) over a section of rough ground made up of trees, thorn bushes, and some brown-grey cut grass with bamboo shoots sticking up out of the ground. Gigantic Four-Armed UFO Sails Once Again Past Sun — NASA Still Won’t Talk About Artificial Object Spotted In 2011, 2012 And 2016, Conspiracy Theorists Say.

UFO hunters claim to have sighted a giant alien UFO spacecraft flying through our inner solar system in an image of the Sun snapped by cameras on board the Solar and Heliospheric Observatory (SOHO) on September 11, 2016. 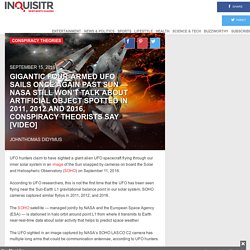 According to UFO researchers, this is not the first time that the UFO has been seen flying near the Sun-Earth L1 gravitational balance point in our solar system. SOHO cameras captured similar flybys in 2011, 2012, and 2016. The SOHO satellite — managed jointly by NASA and the European Space Agency (ESA) — is stationed in halo orbit around point L1 from where it transmits to Earth near-real-time data about solar activity that helps to predict space weather. The UFO sighted in an image captured by NASA’s SOHO LASCO C2 camera has multiple long arms that could be communication antennae, according to UFO hunters. 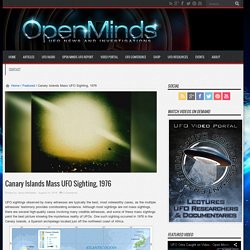 Although most sightings are not mass sightings, there are several high-quality cases involving many credible witnesses, and some of these mass sightings paint the best picture showing the mysterious reality of UFOs. One such sighting occurred in 1976 in the Canary Islands, a Spanish archipelago located just off the northwest coast of Africa. The Canary Islands (Credit: Oona Räisänen/Wikimedia Commons) In the mid-1990s, philanthropist Laurance Rockefeller financed a report that provided an overview of major UFO events and the evidence surrounding the UFO phenomenon.

This report was intended to educate government officials about UFOs, and as such, it was sent to the White House and members of the U.S. Laurance Rockefeller. More Than 60 School Children Witness Non-Human Beings & A Large Craft Landing – Cosmic Scientist. One of the most astonishing UFO witness cases comes from a supposed encounter with over sixty schoolchildren in the town of Ruwa, Zimbabwe, on September 16th 1994. 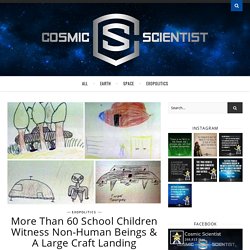 The children claim to have seen multiple hovering objects that resembled what we would describe as spaceships. Remember, unidentified objects have been tracked on radar scores of times – and at the same time have been visually confirmed by military pilots (and more) from all over the world. Dozens of governments have already disclosed the existence of UFOs. What is so intriguing about these disclosures is the fact that these unknown objects perform extraordinary maneuvers that defy our current understanding of physics, maneuvers that no known aircraft in the world can perform.

“Until this day, he has never stopped talking about it.” – Mother of one of the children (source) What Happened Some of these children were so taken back by this experience that they ran into the school crying. Quite a scary thought for a child to bear. MALTA UFOS: JOHN LENARD WALSON ROOFTOP 1.