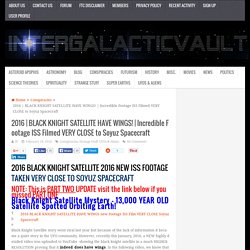 The Black Knight Satellite story went viral last year but because of the lack of information it became a quiet story in the UFO community. However, recently this January, 2016, a NEW highly detailed video was uploaded to YouTube showing the black knight satellite in a much HIGHER RESOLUTION proving that it indeed does have wings. In the following video, we know that the new view was near the Russian Soyus Spacecraft and is said to be filmed by the ISS (International Space Station). 01/2016 – Low Earth Orbit, International Space Station. Leaked pictures from ISS show The 13,000 year old Black Knight Satellite UFO very close to Soyuz Spacecraft during approach to the Station. Is Earth a Prison Planet and the Moon a Station for Guardians? Isaac Asimov suggested a long time ago that the Moon is not a natural astral body . 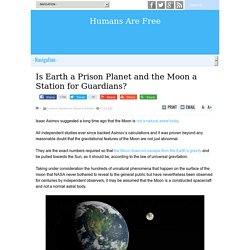 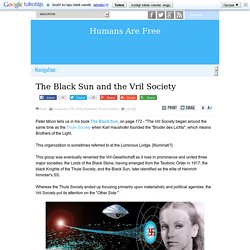 WATCH: NASA Cuts Live Video Transmission As 3 UFOs Fly Past Earth. This shocking footage is causing quite a stir online.Some have already branded the clip definitive PROOF of alien lifeforms. 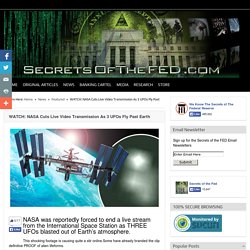 VIA| The video – which is reportedly shot from the International Space Station – shows three unidentified flying objects blast out of Earth’s atmosphere. The lights leave our planet seconds before the live video feed is cut by NASA due to a reported “loss of signal”. “BINGO Caught them red handed leaving earths orbit,” one viewer wrote on Youtube “Thats the kind of proof that is needed.”Another posted on the video sharing website: “Cut the cameras more that just confirms its true.” The NASA footage – entitled “UFO Mysteries: UFOs, Angels Or Biological Creatures Seen Leaving The Earth?” – appeared online earlier this week. The Secret Break Away Civilization You’re Not Supposed To Know About. No, the video is NOT all a seminar. 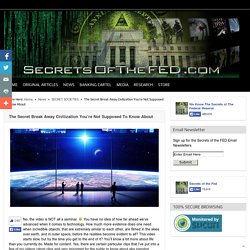 You have no idea of how far ahead we’ve advanced when it comes to technology. How much more evidence does one need when incredible objects, that are extremely similar to each other, are filmed in the skies over earth, and in outer space, before the realities become evident to all? The Biggest Military Hack Ever Exposes NASA's Top Secret 'UFO Files' AnonHQ.

Hacktivism Between February 2001 and March 2002 Gary McKinnon from North London, looking for evidence of free energy suppression and a cover-up of UFO activity and other technologies potentially useful to the public, hacked into 16 NASA computers as well as dozens of US Army, Navy, Air Force, and Department of Defense computers. 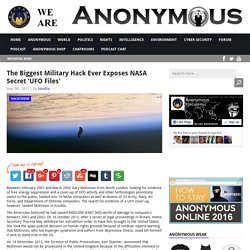 The search for evidence of a UFO cover-up, however, landed McKinnon in trouble. The Americans believed he had caused $800,000 (£487,000) worth of damage to computers between 2001 and 2002. On 16 October 2012, after a series of legal proceedings in Britain, Home Secretary Theresa May withdrew her extradition order to have him brought to the United States. She took the quasi-judicial decision on human rights grounds because of medical reports warning that McKinnon, who has Asperger syndrome and suffers from depressive illness, could kill himself if sent to stand trial in the US. Floating 'Interdimensional City' Witnessed by Hundreds of Villagers in Africa. Over the years gone by, there have been so many fascinating stories of some extremely strange beings/objects suddenly appearing from the constellations around us to planet earth, with some completely unexplainable objects faster than any human fighter jets could ever travel. 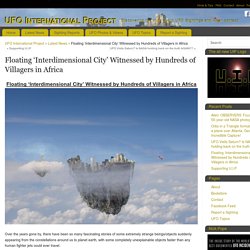 Not that long ago one of such ‘bizarre’ images appeared in one of the villages in Bauchi State. The villagers narrated this strange sight to Greg Odogwu and Mukhtar Lawal Suleiman. The actual place was a local border village called Dulali, in Lanzai South Ward, Darazo Local Government of Bauchi State. Alien Message to Mankind: “Do You Wish That We Show Up?” The original source of this information appears to be by Mr. 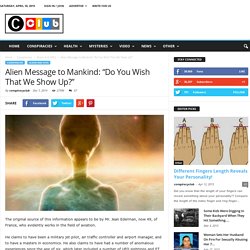 Jean Ederman, now 49, of France, who evidently works in the field of aviation. He claims to have been a military jet pilot, air traffic controller and airport manager, and to have a masters in economics. He also claims to have had a number of anomalous experiences since the age of six, which later included a number of UFO sightings and ET contacts.

He writes: “… after having learned how to mentally project myself to a place in the presence of benevolent extraterrestrials, I received the following message…” [Translated from French into English by Dan Drasin, a Marin-based film-maker and researcher]. Each one of you wishes to exercise your free will and experience happiness. Whistleblower: Massive Extraterrestrial Crafts Hiding Behind Moon. A government whistleblower recently stated that officials are baffled as to why numerous extraterrestrial crafts have docked themselves on the opposite side of the moon. 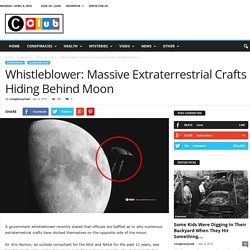 Dr. Eric Norton, an outside consultant for the NSA and NASA for the past 12 years, was hired to track various object in space including meteors, comets, etc.. but recently has been following a number of unidentified aircrafts that were heading towards Earth. On January 22, 2012, Dr. Norton was called to the MacDonald Observatory in Texas and saw “massive, three dimensional black structures in space, in straight line formation advancing in the direction of planet Earth. The object seemed to be emitting some sort of force field that deflected space particles from touching their surface, almost like the magnetic field around the earth. Is The Moon An Artificial Alien Base? – Secrets of the Fed. Several strange phenomena have let some to believe that the eternal companion of the Earth, the Moon is in fact some sort of a huge spaceship. 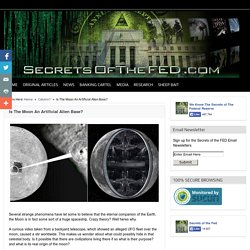 Crazy theory? Well heres why. A curious video taken from a backyard telescope, which showed an alleged UFO fleet over the moon, caused a stir worldwide. This makes us wonder about what could possibly hide in that celestial body. Mexican Government Releases Proof of Aliens and Ancient Space Travel. In what will soon be considered as the Holy Grail of extraterrestrial research, the Mexican government has released ancient documents proving the existence of E.T.’s once and for all. Newly released Mayan documents, i.e. artifacts, dating back at least 1300-years reveal that the human race is not alone and highly advanced technologies including space travel have likely existed for quite some time. During Japan Tsunami a strange creature was caught on camera - real footage. Strange creature spotted during Japan's tsunami. UFO Tsunami Japan strange Object leaving sea. Strange Creature Caught On Camera During The Tsunami In Japan. Brace yourself because what you will see is something spooky and a very strange creature that changes everything that you believe!

During the powerful quake and devastating tsunami hits Japan, a man caught on his camera a creature that got his attention. Still Unsure About Alien Life? THIS Settles It! Are you still not completely convinced that there’s alien life in the universe, let alone on our planet? There’s SO much evidence proving there are many different species that have been visiting Earth for centuries, and now government officials are finally disclosing that they have been in contact for some time now. People around the world are having similar abduction stories, coming together in support groups to share their experiences. A Gigantic Mushroom Cloud Photographed on Mars By The Indian Mars Orbitor. This Mars Orbiter, which was launched by the Indian Space Research Organization (ISRO) on November 5, 2013 has spotted what looks like a mushroom cloud on the planet’s surface.

Taken by the onboard Mars Colour Camera (MCC), these images have been quickly uploaded to the ISRO’s website, with a great amount of detail. The large mushroom cloud was sighted in the Valles Marineris Canyon, which is located along the equator of the planet, which spans close to a quarter of the planet’s circumference. Looking like something out of a nuclear explosion, there looks to be a crater formed underneath the cloud. UFO = There Is A Million Spaceships Around Our Planet [Documentary] [Video] Underwater Extraterrestrials: Declassified Russian Navy Records Say They’re Real. Unidentified submerged objects (USOs) are not as famous as UFOs although they are often encountered, according to declassified Russian Navy records.

The common trait of all USO phenomena is that they involve unexplained and technologically advanced objects, far superior to anything we’ve ever built. The recently declassified documents contain Soviet era reports detailing many cases of possible USO encounters. Former naval officer and Russian UFO researcher Vladimir Azhazha believes these documents are of great value. “At Least 4 Known Alien Species Have Been Visiting Earth For Thousands Of Years” EX Canadian Defense Minister Continues To Blow The Whistle. This article originally appeared in collective-evolution. Ancient Computer Even More Ancient Than We Thought. China Releases Moon Footage Of Alien Bases. (Before It's News) Dr. Micheal Salla has indicated that there is a Military Industrial Extraterrestrial Complex or MIEC, and that Earth is being assimilated by an alien agenda which also operates on Earth’s Moon. The photo below is similar to many that I myself have seen.

Video: Alien Buildings On Moon's Surfaces Near Zhukovsky Crater. (Before It's News) Scott Waring, author of UFO Sightings Daily, says, ”I looked at a Apollo 16 photo for a mere five minutes and decided to check in an area of the photo that I imagined others would never check…the dark patches on the far left. Two More Mysterious Siberian Craters Discovered. A couple weeks ago, scientists were made aware of a massive crater in the permafrost of Yamal, Siberia. Huge Discovery in Ancient Peru! New Nephilim Skulls Unearthed! Link Between Aliens, Elongated Skulls, and Megaliths (Video) UFO LEAKED 2014 The New Area 51 Full Documentary HQ.