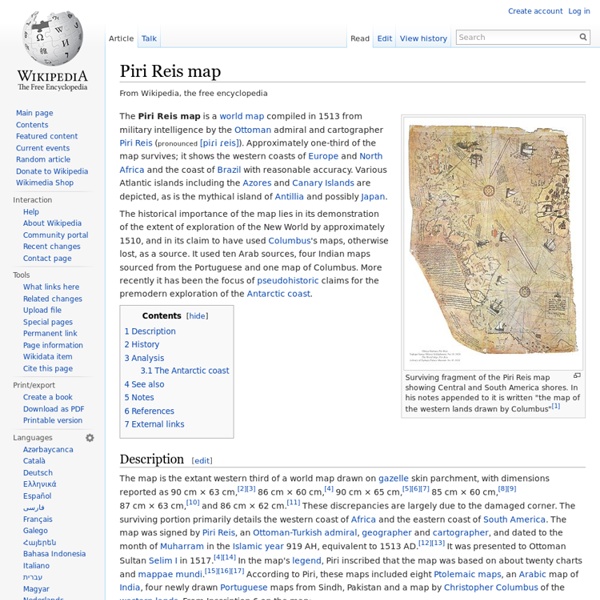 Surviving fragment of the Piri Reis map showing Central and South America shores. In his notes appended to it is written "the map of the western lands drawn by Columbus"[1] The Piri Reis map is a world map compiled in 1513 from military intelligence by the Ottoman admiral and cartographer Piri Reis (pronounced [piɾi ɾeis]). The historical importance of the map lies in its demonstration of the extent of exploration of the New World by approximately 1510, and in its claim to have used Columbus's maps, otherwise lost, as a source. Description[edit] The map is the extant western third of a world map drawn on gazelle skin parchment, with dimensions reported as 90 cm × 63 cm,[2][3] 86 cm × 60 cm,[4] 90 cm × 65 cm,[5][6][7] 85 cm × 60 cm,[8][9] 87 cm × 63 cm,[10] and 86 cm × 62 cm.[11] These discrepancies are largely due to the damaged corner. History[edit] After reading about the map's discovery in The Illustrated London News, United States Secretary of State Henry L. Analysis[edit] Notes[edit]

Atlantis or Someone Else? The report is about an Earth based scenario, a combination of the possibilities inherent in a background Earth story, some possible hypotheses by me, and then some visual evidence to add into the mix. It will be up to you to decide if there is any merit. First we'll start with the background story. In more modern times, the story of ancient Atlantis has fascinated generations and some to obsession as a real place. As many of you may know, it is acknowledged that the story of Atlantis was first introduced into public awareness via dialogues by the Greek philosopher Plato around 355–360 BC. As the story goes, Plato's references regarding Atlantis was allegedly in turn sourced from a 500 hundred years earlier 6th century BC trip by the Athenian lawgiver Solon to Egypt where an Egyptian priest there translated a part of an unknown history of ancient Athens and Atlantis from papyri scrolls of Egyptian hieroglyphs to Greek of a time some 9,000 year earlier to that 6th century period.

Top 10 Lost Cities A city becomes “lost” when it is abandoned by its inhabitants and left to decay. This can be the result of war, migration, or natural disaster, but in each case these cities can act as a sort of time capsule, leaving a civilization frozen in history and waiting to be discovered. While many of these cities have indeed been rediscovered, others have never been found and have taken on the status of legend. 10. Also known as the Wandering City and the City of Patagonia, The City of the Caesars is a mythical city that is believed to have been located on the southernmost tip of South America in the region known as Patagonia. 9. Made famous in the epic poems of Homer, Troy was a once-legendary city located in modern day Turkey. 8. Supposedly located deep in the jungles of Brazil, the lost city of Z was said to be an advanced civilization with a sophisticated network of bridges, roads, and temples. 7. 6. 5. 4. 3. 2. 1.

Top 10 Dead Persons Still Said To Be Alive After Death We’ve all heard of people faking their deaths and later being found to be alive. Some do it for attention, others as a publicity stunt, and others to just get out of the spotlight, but in the end realize they soon return to the spotlight. In any case, people who intentionally go “missing” are usually found guilty or some other crime. We’ve all probably heard of conspiracies and skeptics as well. 10. Alexander I was able to start off as a successful king, but due to family circumstances, he soon became very suspicious and paranoid of others. 9. Born into royalty, Princess Diana was most definitely a member of the royal family who was able to become a worldwide icon, bringing the issue of AIDS awareness and treatment to the forefront. 8. Known for being the front man of The Doors, Jim Morrison definitely became a popular artist in the 1960s. 7. D.B. 6. Amelia Earhart stands as one of the most notable women when it comes to pioneering early aviation. 5. 4. 3. 2. 1.

Top 10 Rare and Important Archeological Finds In archaeology, an artifact is an object recovered which may provide cultural interest and help in the understanding of human history. In the last 100 years, a large collection of important archeological discoveries have been made. Some of these artifacts have helped people understand the origins of life on Earth, while others have presented problems for scientists. 10. On March 22, 2011, a man named David Elkington, who is a scholar of ancient religious archaeology, issued a press release stating that a hoard of ancient books had been discovered in Jordan. Rare Discovery Some of the words in the codices are written in a form of archaic Hebrew script with ancient messianic symbols. The Israeli man who currently owns the codices has denied smuggling them out of Jordan, and claims the books have been in his family for 100 years. A number of experts have urged skepticism about the books until further investigation can be conducted. 9. 8. 7. 6. 5. 4. Rare Discovery 3. 2. 1.

Top 10 Unexplained Mysterious Disappearances in History It is a fact that literally thousands of people disappear or go missing every year in this country alone; some of these are likely well-covered up homicides, but most are voluntary—either teenage runaways or people who just want to start over again—with a few as yet undiscovered suicides thrown in for good measure. However, there are a few mysterious disappearances that remain inexplicable or have so captured the public imagination that they continue to intrigue us to this day. Here is my listing of the top ten most mysterious and unexplained disappearances over the years that continue to baffle investigators to this day. 10. Harold Holt, 1967 Prime Minister Mysteriously Disappears It’s not every day that an active head of state—in this case the Prime Minister of Australia—goes disappearing, but that’s precisely what happened one Sunday morning in December of 1967 when the Prime Minister went for a swim and was never seen again. 9. Mysterious Disappearance of Italian Explorer 8. 7. 6. 5.

Top 10 Most Important Historical Finds For as long as there have been civilizations on earth, man has been curious about his ancestors. Our need to connect to our past fuels the study of anthropology and the many important sites and artifacts uncovered through archaeology have opened our eyes to the lives of those that came before us. 10. Qin Shi Huang’s Terracotta Army A farmer in Xi’an named Yang was drilling for water when he found the Terracotta Army in 1947. Importance The Terracotta Army is our doorway to understanding how the real Qin Dynasty army functioned. 9. The Dead Sea Scrolls are a collection of ancient, mostly Hebrew manuscripts that were found at several sites on the northwest shore of the Dead Sea. The discovery of the Dead Sea Scrolls is widely considered the greatest manuscript find of all time. 8. A collection of around 25,000 clay tablet fragments, the Library of Ashurbanipal was discovered in the mid 19th century by Austen Henry Layard at the Mesopatamian city of Nineveh (in what is now Iraq). 7. 6. 4.

The Mayans reveal their darkest mysteries: New excavation reveals secrets of the Mayan calendar - including black-clad figures and symbols never seen before Wall covered in calculations relating to Mayan calendarLine-up of men in black uniformsAstrological calculations not fully understoodDates seem to stretch 7,000 years into FUTUREContradicts 'doomsday' predictions about 2012First paintings found on walls in Mayan dwellingsHuge city in Guatemala finally reveals its secrets By Rob Waugh Published: 18:04 GMT, 10 May 2012 | Updated: 10:46 GMT, 11 May 2012 A vast city built by the ancient Mayan civilisation and discovered nearly a century ago in modern day Guatemala is finally starting to yield its secrets - including a hint that apocalyptic predictions around the 'end' of the Mayan Calendar may be wrong. Excavating for the first time in the sprawling complex of Xultzn in Guatemala's Peten region, archaeologists have uncovered a structure that contains what appears to be a work space for the town's scribe. Scroll down for video: Angelyn Bass cleans and stabilizes the surface of a wall of a Maya house that dates to the 9th century A.D.

New media studies New media studies is a fairly recent academic discipline that explores the intersections of computing, science, the humanities, and the visual and performing arts. Janet Murray, a prominent researcher in the discipline, describes this intersection as "a single new medium of representation, the digital medium, formed by the braided interplay of technical invention and cultural expression at the end of the 20th century...." In a course on New Media Studies, students are exposed to ideas and insights on media from communication theorists, programmers, educators, and technologists. Among others, the work of Marshall McLuhan is viewed as one of the cornerstones of the study of media theory. A program in New Media Studies may incorporate lessons, classes, and topics within Communication, Journalism, Computer Science, Programming, Graphic Design, Web design, Human-computer interaction, Media theory, English, and other related fields. References[edit] See also[edit] New Media

Wishing upon a Bao done by my art teacher Reminder and goals ! Periodic Table of Elements and Chemistry