The Conscious Universe - NOEMA. Credits Joe Zadeh is a writer based in Newcastle. 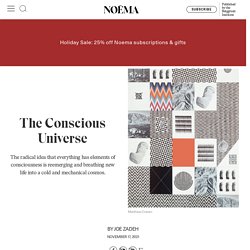 London was a crowded city in 1666. Sex Abuse Crisis in Amish Country. Ancient City's Destruction by Exploding Space Rock May Have Inspired Biblical Story of Sodom. The destruction of Tall el-Hammam, a Bronze Age city in the Jordan Valley, by an exploding comet or meteor may have inspired the biblical story of Sodom and Gomorrah, a new study suggests. 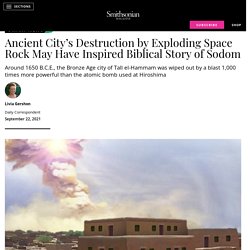 (“[N]otoriously sinful cities,” Sodom and Gomorrah’s devastation by sulfur and fire is recorded in the Book of Genesis, according to Encyclopedia Britannica.) At the time of the disaster, around 1650 B.C.E., Tall el-Hammam was the largest of three major cities in the valley. It likely acted as the region’s political center, reports Ariella Marsden for the Jerusalem Post.

How Amy Coney Barrett might know she’s a political hack. Was there no room for the queer individual in Arab history? ‘I’m sure you’ve heard about Sarah Hegazy,’ read the text on my phone. 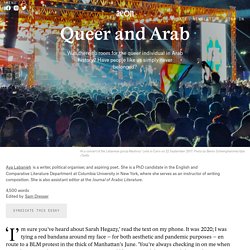 It was 2020; I was tying a red bandana around my face – for both aesthetic and pandemic purposes – en route to a BLM protest in the thick of Manhattan’s June. One Hundred and Eleven Trees – Emergence Magazine. Corn Tastes Better on the Honor System – Robin Wall Kimmerer. Corn production today uses more natural resources than any other crop. 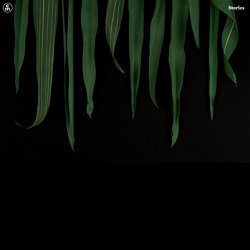 Around 90 million acres are planted in corn, and the last remaining remnants of native prairie and grassland are being plowed under for corn every year. Corn is a hungry crop and a thirsty one. Vast amounts of water are consumed, and a staggering amount of fertilizer. Corn not only consumes a great deal—it produces a huge amount of waste. Much of that fertilizer never even makes it into the plant, instead it is washed downstream, producing toxic algal blooms in waters everywhere along the way and ultimately creating the growing dead zone in the Gulf of Mexico. Why Some White Evangelical Republicans Are So Opposed To The COVID-19 Vaccine.

The First Report: Jason Berry Uncovers Abuse in the Church. Nearly 20 years ago, an investigation by The Boston Globe into sexual abuse by Roman Catholic priests ignited a firestorm of scandal that has traveled around the world. 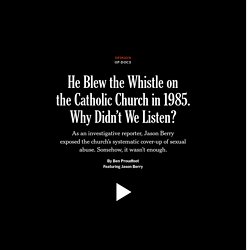 For many Americans, these shocking revelations — especially of the related cover-ups by the church — came out of nowhere, almost like a bolt of lightning. But the sobering reality is that this bolt of lightning had been striking for at least 15 years. In May 1985, Jason Berry, a Catholic journalist in Louisiana, wrote his first piece on child sexual abuse in the church, for the National Catholic Reporter and the Times of Acadiana. Mr. How Will Our Religions Handle the Discovery of Alien Life? What would your priest, rabbi, or imam say if we discovered alien life? 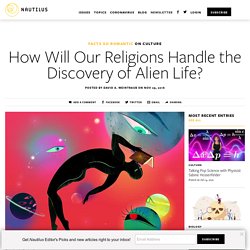 For the religious, knowing that life on Earth is not unique may demand radical new ways of thinking about ourselves: How special and sacred are we? Is Earth a privileged place? Do we have an obligation to care for beings on other planets? Should we convert ET to “my” religion? These questions point to a deeper issue about whether our religions can adapt to the idea that humans are not the only sentient beings in the universe capable of worshiping God.

Can Religion Guide the Ethics of A.I.? “Alexa, are we humans special among other living things?” 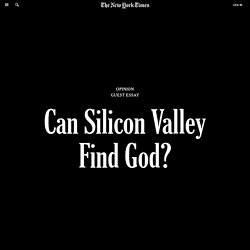 One sunny day last June, I sat before my computer screen and posed this question to an Amazon device 800 miles away, in the Seattle home of an artificial intelligence researcher named Shanen Boettcher. Pope reverses Benedict, reimposes restrictions on Latin Mass. ROME (AP) — Pope Francis cracked down Friday on the spread of the old Latin Mass, reversing one of Pope Benedict XVI’s signature decisions in a major challenge to traditionalist Catholics who immediately decried it as an attack on them and the ancient liturgy. 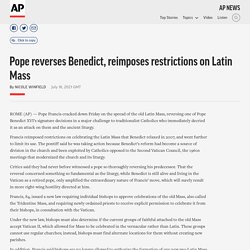 Francis reimposed restrictions on celebrating the Latin Mass that Benedict relaxed in 2007, and went further to limit its use. The pontiff said he was taking action because Benedict’s reform had become a source of division in the church and been exploited by Catholics opposed to the Second Vatican Council, the 1960s meetings that modernized the church and its liturgy. In Defense of Gossip. Some believe that evangelical pastors denounce gossip to protect themselves against its power to expose secrets and weaken their own status. 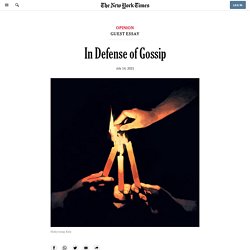 Chrissy Stroop, an ex-evangelical and a co-editor of the book of first-person essays “Empty the Pews: Stories of Leaving the Church,” is a firm believer in that theory. “These men believe God has granted them authority and that women cannot have authority over men,” Ms. Stroop told me, “and that gossip is a threat to their reputations and power — reputations that are often undeserved and power that is often exploited abusively.” I grew up in an off-the-grid Christian commune. Here's what I know about America's religious beliefs.

The only time I saw Brother Sam in person, he was marching like a soldier as he preached, with sweat running like tears from his temples and the Bible a heavy brick in his right hand. 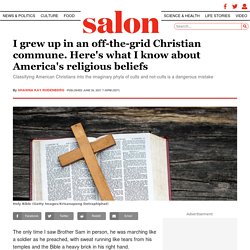 It was 1978, I was five, and my family had traveled to Lubbock, Texas, for a Body Convention, which was what we called the semi-annual gatherings of hundreds, sometimes thousands, of members of The Body, or Body of Christ, an expansive network of charismatic communities created almost singlehandedly by Brother Sam. Southern Baptist Convention rocked by secret recordings and leaked letters. Vatican warns U.S bishops about rebuking Biden, other Catholic pols. Ladaria, in his letter, said any new policy “requires that dialogue occurs in two stages: first among the bishops themselves, and then between bishops and Catholic pro-choice politicians within their jurisdictions.”

Even then, Ladaria advised, the bishops should seek unanimous support within their ranks for any national policy, lest it become “a source of discord rather than unity within the episcopate and the larger church in the United States.” Ladaria made several other points that could complicate the plans of bishops pressing for tough action: Scientists establish a link between religious fundamentalism and brain damage. A study published in the journal Neuropsychologia has shown that religious fundamentalism is, in part, the result of a functional impairment in a brain region known as the prefrontal cortex.

The findings suggest that damage to particular areas of the prefrontal cortex indirectly promotes religious fundamentalism by diminishing cognitive flexibility and openness—a psychology term that describes a personality trait which involves dimensions like curiosity, creativity, and open-mindedness. Religious beliefs can be thought of as socially transmitted mental representations that consist of supernatural events and entities assumed to be real. Religious beliefs differ from empirical beliefs, which are based on how the world appears to be and are updated as new evidence accumulates or when new theories with better predictive power emerge.

According to Dr. Will abuse charges at a boarding school finally push Missouri to regulate faith-based institutions? Abraham Piper Becomes a Critic of Evangelicalism on TikTok. Melissa Stewart, another popular “exvangelical” personality on TikTok, grew up in an Independent Fundamental Baptist church in Minnesota. Uyghurs Aren't Safe From China Even Outside Xinjiang.

This article is a collaboration between The Atlantic and the Fuller Project. On a summer afternoon nearly four years ago, Maryam Muhammet thought her family’s long journey to freedom was almost complete. The man behind an Instagram account showing pastors’ wealth. Is a Long-Dismissed Forgery Actually the Oldest Known Biblical Manuscript? 'Religious liberty' is coming for voting rights. Gregory Dow case: How one woman pursued justice in U.S. and Kenya for child victims of sex crimes. Who is God?! Trevor Noah puts Charlamagne in his place. 38 Beautiful Holy Sites Around the World. The global spread of the coronavirus has disrupted travel. Stay up to date on the science behind the outbreak. How White Evangelical Christians Fused With Trump Extremism. A group called the Jericho March, which has led a series of demonstrations for “election integrity,” held five days of events in Washington that culminated on Wednesday.

Last month the group, which included speakers like Mr. Pro-mask or anti-mask? Your moral beliefs probably predict your stance. What Day of the Dead tells us about the Aztec philosophy of happiness. Growing up in the United States, I remember on Halloween my mother used to say, “Honey, this is not just a day for costumes and candy. With 9 new electors, Pope Francis remakes the college of cardinals. (RNS) — Pope Francis, in a surprise announcement on Sunday, Oct. 25, named 13 new cardinals, nine of whom will be able to vote for a new pope when Francis dies or resigns.

The pope’s unexpected election message. Untitled. American Catholics are again asking whether they can, in good conscience, vote for a political candidate who supports public policies in matters of life and death that are antithetical to Catholic teaching. The answer is not obvious. Both political parties support policies that offend the Catholic conscience, including widespread support for abortion on demand among Democrats and consistent support for the death penalty among Republicans.

The two parties also have wholly different views of immigration, entrenched racism and economic justice. Untitled. Namo Avalokiteshvara. Untitled. White supremacist ideas have historical roots in U.S.Christianity click 2x. If churches are openly political, why are they not paying taxes? While the desire to tax churches is not new, it seems as far from reality as possible at this moment.

Study: Turns out religion is kinda like an opiate. Fundamentalists hacked my husband to death. The same hate is spreading across the world. Jesus checking if the Facebook pic has enough likes to save the sick child. Like-farming scam exposed. - RealFunny. Pope Francis' associates compare right-wing US Christians with jihadists - The i newspaper online iNews.

Covington Catholic High School Students Harass Native American Protesters During Indigenous Peoples March. China is Surveilling and Threatening Uighurs in the U.S. John Chau may have been influenced by past evangelical missions and their belief in power of faith. My fundamentalist childhood: less like a temple, more like a cage. Brain Washing ( Jesus Camp ''Highlights'' ) Ideologically motivated far-right extremists have killed close to 500 people since 1990 – and 10 percent were targeted based on religion. Carved idol from the Urals shatters expert views on birth of ritual art. Trump prophecy and other Christian movements: 3 essential reads. There's a psychological link between conspiracy theories and creationism. Jehovah's Witnesses refused to hand over evidence in sexual abuse case. Bishop Questions.docx.

Pope Francis declares death penalty inadmissible in all cases. Did Principal Mamasai Mamakusa Expel Two Children for Wearing Crucifixes? How America Got Divorced from Reality: Christian Utopias, Anti-Elitism, Media Circus. My stolen childhood: understanding the trokosi system - BBC Africa Eye documentary. Bishop David Oyedepo Tops Forbes List Of Richest Pastors In The World, Net Worth $150M - INFORMATION NIGERIA. Evolution - Simplest Explanation Possible. The Bible and the belt: Inside a camp for gay youth. Life Of Brian- 1979 Debate (1/4) Why do so many Mormons back Trump? Some say it's about the land. Pope warns oil executives: Climate change may ‘destroy civilization’ Project Blitz: The legislative assault by Christian nationalists to reshape America. Atlasobscura. Is Mike Pence right that religion is gaining new life in US? In US evangelical capital, a new progressiveness and differing views on Israel.

Bruce MacKinnon's cartoon in the Chronicle Herald. The fight for the right to be a Muslim in America. The Scariest Catholic in America 2 clicks. Cunk On Christmas 2016. Why Trump's evangelical supporters welcome his move on Jerusalem. Pope says world must not 'extinguish hope' in hearts of migrants, refugees. Temple of All Religions. Everybody love everybody.