OB/GYN Shares Reasons Her Patients Had For Abortions click 2x 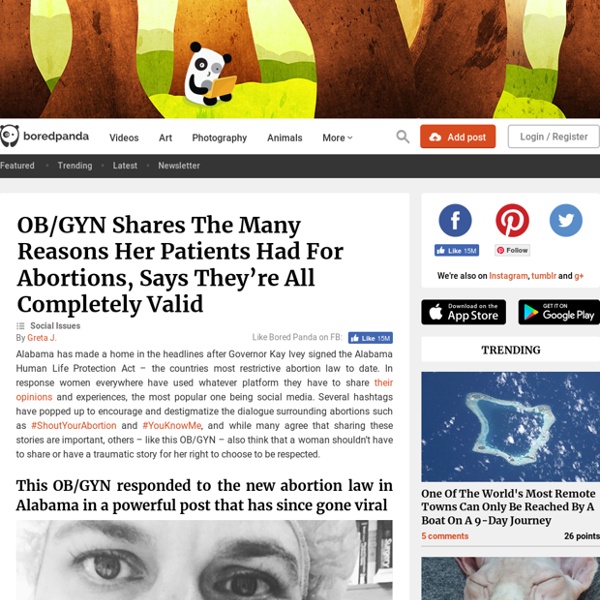 Alabama has made a home in the headlines after Governor Kay Ivey signed the Alabama Human Life Protection Act – the countries most restrictive abortion law to date. In response women everywhere have used whatever platform they have to share their opinions and experiences, the most popular one being social media. Several hashtags have popped up to encourage and destigmatize the dialogue surrounding abortions such as #ShoutYourAbortion and #YouKnowMe, and while many agree that sharing these stories are important, others – like this OB/GYN – also think that a woman shouldn’t have to share or have a traumatic story for her right to choose to be respected. This OB/GYN responded to the new abortion law in Alabama in a powerful post that has since gone viral An obstetrician-gynecologist with almost 17-years of experience shared a post on the website Scary Mommy as a response to Alabama’s law, that only allows abortions to prevent a serious health risk.

Related:  Thoughts • Why or Why Not • Heal the World - or not

Muslims lived in America before Protestantism even existed The first words to pass between Europeans and Americans (one-sided and confusing as they must have been) were in the sacred language of Islam. Christopher Columbus had hoped to sail to Asia and had prepared to communicate at its great courts in one of the major languages of Eurasian commerce. So when Columbus’s interpreter, a Spanish Jew, spoke to the Taíno of Hispaniola, he did so in Arabic. Not just the language of Islam, but the religion itself likely arrived in America in 1492, more than 20 years before Martin Luther nailed his theses to the door, igniting the Protestant reformation.

What If Consciousness Comes First? Source: ColiN00B/Pixabay Despite the success of neuroscience in establishing a wide range of correlations between brain processes and conscious experience, there is at least one question about the relationship between the brain and consciousness that continues to appear unanswerable, even in principle. This is the question of why we have conscious experience at all. article continues after advertisement The problem is that there could conceivably be brains that perform all the same sensory and decision-making functions as ours but in which there is no conscious experience. That is, there could be brains that react as though sad but that don’t feel sadness, brains that can discriminate between wavelengths of light but that don’t see red or yellow or blue or any other color, brains that direct their bodies to eat certain foods but that don’t taste them.

America Wasn’t a Democracy, Until Black Americans Made It One My dad always flew an American flag in our front yard. The blue paint on our two-story house was perennially chipping; the fence, or the rail by the stairs, or the front door, existed in a perpetual state of disrepair, but that flag always flew pristine. Our corner lot, which had been redlined by the federal government, was along the river that divided the black side from the white side of our Iowa town. At the edge of our lawn, high on an aluminum pole, soared the flag, which my dad would replace as soon as it showed the slightest tatter. ‘Highly Speculative Reasoning on the Concept of Democracy’ by Alain Badiou – TheoryLeaks The word “democracy” is today the main organizer of consensus. What the word is assumed to embrace is the downfall of Eastern Socialists States, the supposed well being of our countries as well as Western humanitarian crusades. Actually the word “democracy” is inferred from what I term “authoritarian opinion.” It is somehow prohibited not to be a democrat. Accordingly, it furthers that the human kind longs for democracy, and all subjectivity suspected of not being democratic is deemed pathological. At its best it infers a forbearing reeducation, at its worst the right of meddling democratic marines and paratroopers.

Trump and Republicans Appeal to Men with Fragile Masculinity, Researchers Find President Donald Trump appeals to men with fragile masculinity, two researchers from New York University wrote in analysis published in The Washington Post. They also said Republican candidates facing a Democrat drew more support in areas with higher levels of fragile masculinity in 2018 House races. The president has touted his masculinity since declaring he would run for office. After Marco Rubio insinuated the president had a small penis in 2016, Trump raised his hands and said "he referred to my hands -- 'if they're small, something else must be small.' A Book Is a Heart That Only Beats in the Chest of Another: Rebecca Solnit on the Solitary Intimacy of Reading and Writing “Learning how to be a good reader is what makes you a writer,” the magnificent Zadie Smith told the audience at the 15th annual New Yorker Festival on a late Friday night, echoing Susan Sontag’s assertion that fruitful writing is born out of fruitful reading, out of a “book-drunken life.” This osmotic relationship between reading and writing has been extolled in forms as piercingly poetic as Kafka’s letter on the purpose of books and as scientifically grounded as the work of Harvard psycholinguist Steven Pinker, but hardly anyone has expressed it more lyrically and with more shimmering aliveness than another of our era’s greatest essayists, Rebecca Solnit, in The Faraway Nearby (public library) — the equally, if differently, rewarding follow-up to her spectacular essay collection A Field Guide to Getting Lost. In the fourth of the book’s thirteen extraordinary essays, titled “Flight,” Solnit writes:

John Oliver on Monty Python: 'inspirational idiots who changed comedy' Writing about the importance of Monty Python is basically pointless. Citing them as an influence is almost redundant. It’s assumed. In fact, from now on it’s probably more efficient to say that comedy writers should have to explicitly state that they don’t owe a significant debt to Monty Python. And if someone does that, they’ll be emphatically wrong. This strange group of wildly talented, appropriately disrespectful, hugely imaginative and massively inspirational idiots changed what comedy could be for their generation and for those that followed. The Root of All Cruelty? The philosopher David Livingstone Smith, commenting on this episode on social media, wondered whether its writer had read his book “Less Than Human: Why We Demean, Enslave, and Exterminate Others” (St. Martin’s). It’s a thoughtful and exhaustive exploration of human cruelty, and the episode perfectly captures its core idea: that acts such as genocide happen when one fails to appreciate the humanity of others.