Muslims lived in America before Protestantism even existed 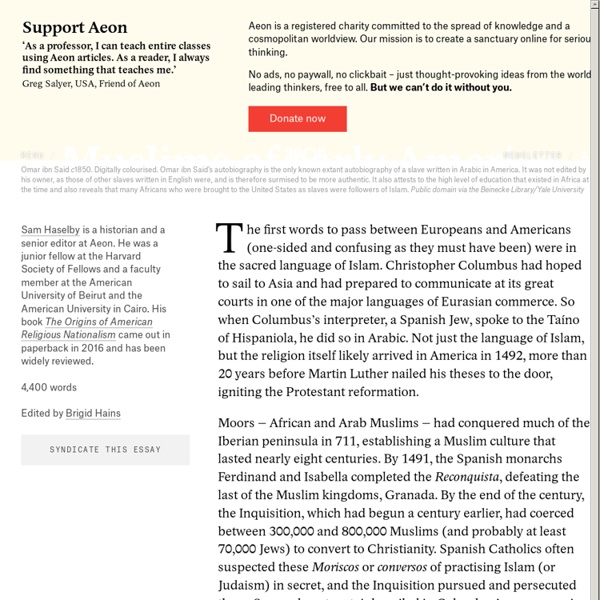 The first words to pass between Europeans and Americans (one-sided and confusing as they must have been) were in the sacred language of Islam. Christopher Columbus had hoped to sail to Asia and had prepared to communicate at its great courts in one of the major languages of Eurasian commerce. So when Columbus’s interpreter, a Spanish Jew, spoke to the Taíno of Hispaniola, he did so in Arabic. Not just the language of Islam, but the religion itself likely arrived in America in 1492, more than 20 years before Martin Luther nailed his theses to the door, igniting the Protestant reformation. Moors – African and Arab Muslims – had conquered much of the Iberian peninsula in 711, establishing a Muslim culture that lasted nearly eight centuries. By 1491, the Spanish monarchs Ferdinand and Isabella completed the Reconquista, defeating the last of the Muslim kingdoms, Granada. Islam served as a kind of blueprint or algorithm for the Spanish in the New World. Updates on everything new at Aeon.

OB/GYN Shares Reasons Her Patients Had For Abortions click 2x Alabama has made a home in the headlines after Governor Kay Ivey signed the Alabama Human Life Protection Act – the countries most restrictive abortion law to date. In response women everywhere have used whatever platform they have to share their opinions and experiences, the most popular one being social media. Several hashtags have popped up to encourage and destigmatize the dialogue surrounding abortions such as #ShoutYourAbortion and #YouKnowMe, and while many agree that sharing these stories are important, others – like this OB/GYN – also think that a woman shouldn’t have to share or have a traumatic story for her right to choose to be respected. This OB/GYN responded to the new abortion law in Alabama in a powerful post that has since gone viral

US cities are losing 36 million trees a year. Here's why it matters and how you can stop it But tree cover in US cities is shrinking. A study published last year by the US Forest Service found that we lost 36 million trees annually from urban and rural communities over a five-year period. That's a 1% drop from 2009 to 2014. If we continue on this path, "cities will become warmer, more polluted and generally more unhealthy for inhabitants," said David Nowak, a senior US Forest Service scientist and co-author of the study. Nowak says there are many reasons our tree canopy is declining, including hurricanes, tornadoes, fires, insects and disease.

Future - Are we on the road to civilisation collapse? Great civilisations are not murdered. Instead, they take their own lives. This article is part of a new BBC Future series about the long view of humanity, which aims to stand back from the daily news cycle and widen the lens of our current place in time. Modern society is suffering from “temporal exhaustion”, the sociologist Elise Boulding once said. Circumcision: Social, Sexual, Psychological Realities We continue examining myths about circumcision, including traditions, social and sexual relations. NOTE: Primary author is Lillian Dell'Aquila Cannon (see her blog), with assistance from Dan Bollinger Part 3

What If Consciousness Comes First? Source: ColiN00B/Pixabay Despite the success of neuroscience in establishing a wide range of correlations between brain processes and conscious experience, there is at least one question about the relationship between the brain and consciousness that continues to appear unanswerable, even in principle. This is the question of why we have conscious experience at all. The 1619 Project In August of 1619, a ship appeared on this horizon, near Point Comfort, a coastal port in the English colony of Virginia. It carried more than 20 enslaved Africans, who were sold to the colonists. No aspect of the country that would be formed here has been untouched by the years of slavery that followed. On the 400th anniversary of this fateful moment, it is finally time to tell our story truthfully. The 1619 ProjectThe 1619 Project is an ongoing initiative from The New York Times Magazine that began in August 2019, the 400th anniversary of the beginning of American slavery.

Sweden pays for grim past After years of denial, Sweden began moves yesterday to compensate thousands of citizens sterilised in a grim social experiment in eugenics which lasted more than 40 years. Stockholm's social affairs ministry announced it would pay up to £13,430 to each surviving victim of the 1934-76 programme. The decision follows the report in January of an official commission set up in the wake of newspaper reports in 1997 that up to 63,000 people - 90 per cent of them women - were sterilised with state approval to improve Swedish "racial purity" as part of a policy of "ethnic hygiene". The commission has received up to 200 calls a month from victims. Its secretary, Leif Persson, said: "They say they have been haunted by this their whole lives and that it has been a real source of shame for them." Teenagers as young as 15 were sterilised, some without their parents' consent, for inadequacies as trivial as shortsightedness or because they allegedly lacked judgment or had "no obvious concept of ethics".

America Wasn’t a Democracy, Until Black Americans Made It One My dad always flew an American flag in our front yard. The blue paint on our two-story house was perennially chipping; the fence, or the rail by the stairs, or the front door, existed in a perpetual state of disrepair, but that flag always flew pristine. Our corner lot, which had been redlined by the federal government, was along the river that divided the black side from the white side of our Iowa town. At the edge of our lawn, high on an aluminum pole, soared the flag, which my dad would replace as soon as it showed the slightest tatter. My dad was born into a family of sharecroppers on a white plantation in Greenwood, Miss., where black people bent over cotton from can’t-see-in-the-morning to can’t-see-at-night, just as their enslaved ancestors had done not long before.

Big History theories pose latest challenge to traditional curriculum A provocative new theory of history which has won influential support from Bill Gates poses the latest challenge to the coalition government plans to return to a traditional school curriculum. Big History, a movement spearheaded by the Oxford-educated maverick historian David Christian, is based on the idea that the academic study of the past can no longer be carried out from a nationalist perspective. Christian and his acolytes argue that the discipline will progress only once it charts human activity with a global scope, looking at chains of cause and effect that do not respect national borders. On a Big History course, the species Homo sapiens is not even mentioned until more than halfway through. "I believe human beings mark a threshold in the development of the planet, of course," Christian has explained, "but it is only part of the picture. The 66-year-old American-born academic is now a professor at San Diego State University after a long period teaching in Sydney, Australia.