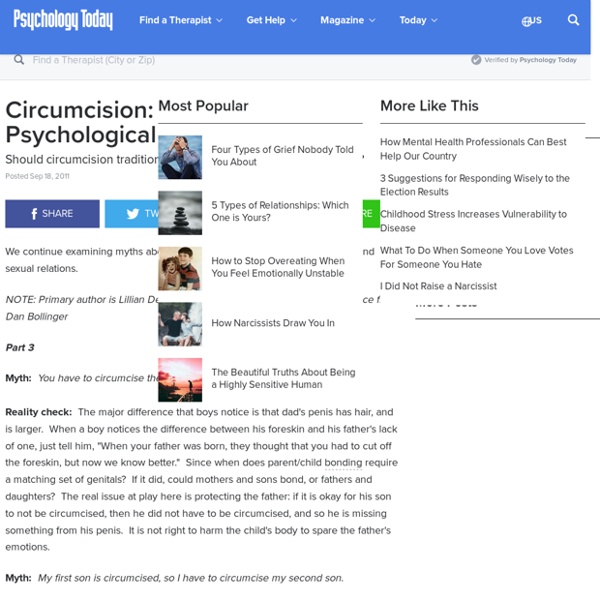 We continue examining myths about circumcision, including traditions, social and sexual relations. NOTE: Primary author is Lillian Dell'Aquila Cannon (see her blog), with assistance from Dan Bollinger Part 3 article continues after advertisement Myth: You have to circumcise the baby so that he will match his dad. Reality check: The major difference that boys notice is that dad's penis has hair, and is larger. Myth: My first son is circumcised, so I have to circumcise my second son. Reality check: You can explain this to your children the same way as with the circumcised father. Myth: My husband is the one with the penis, so it is his choice. Reality check: If your husband is circumcised, he has no idea what having a foreskin is like, and he is likely operating from a psychological position of needing to believe that what was done to him was beneficial and important. Myth: Everyone is circumcised. Myth: Circumcision is an important tradition that has been going on forever. Recommended:

The Best Emergency Preparedness Supplies for 2019: Reviews by Wirecutter The key tools to have on hand for an emergency—everything from an atlas to good duct tape—are also key tools to have on hand for life in general. A common theme that we noticed in this category is that while a great tool can be a genuine joy to use and serve you well for years (if not decades), cheap imitators will waste both your money and your time. Go for the good stuff. —KT Gas shut-off tool Climate change has contributed to droughts since 1900, and is likely to get worse, says tree-ring study Using studies of tree rings going back centuries, scientists have unearthed clear evidence that the rise of human-generated greenhouse gases was having an effect on global drought conditions as early as 1900. A new, first-of-its-kind study by scientists at Columbia University’s Earth Institute, published Wednesday in the journal Nature, largely confirms what climate models have shown. In the absence of strong historic data on precipitation, those computer models forecast not only future scenarios, but shed light on historical trends. The dovetailing of the tree-ring studies, which correlate to soil moisture, with climate models gives scientists the assurance that the computer models are, in fact, correct, they say.

Muslims lived in America before Protestantism even existed The first words to pass between Europeans and Americans (one-sided and confusing as they must have been) were in the sacred language of Islam. Christopher Columbus had hoped to sail to Asia and had prepared to communicate at its great courts in one of the major languages of Eurasian commerce. So when Columbus’s interpreter, a Spanish Jew, spoke to the Taíno of Hispaniola, he did so in Arabic. Not just the language of Islam, but the religion itself likely arrived in America in 1492, more than 20 years before Martin Luther nailed his theses to the door, igniting the Protestant reformation. Moors – African and Arab Muslims – had conquered much of the Iberian peninsula in 711, establishing a Muslim culture that lasted nearly eight centuries. By 1491, the Spanish monarchs Ferdinand and Isabella completed the Reconquista, defeating the last of the Muslim kingdoms, Granada.

Donald Trump fans cry betrayal as he rebukes Capitol violence Donald Trump’s belated “concession” to a peaceful and orderly transition of power after the storming of the US Capitol has provoked anger and conspiracy theories among some of his most ardent followers. On social media channels and chatrooms like Parler and 4chan, where far-right Trumpists have gravitated as other social media sites have increasingly shut out the president, there were complaints of betrayal. Trump claimed on Thursday that he was “outraged by the violence, lawlessness and mayhem” of the Capitol siege that he had incited, and said those who “broke the law will pay” – comments that perhaps reflected concern over mounting legal and political hazard rather than a newfound sense of contrition and integrity.

Plastic leachates impair growth and oxygen production in Prochlorococcus , the ocean’s most abundant photosynthetic bacteria Plastic leachates negatively affect Prochlorococcus growth Leachates of common plastic items (HDPE shopping bags and PVC matting) were made using a base of sterile artificial seawater. Exponential phase cultures of Prochlorococcus were inoculated into media containing a range of leachate dilutions (generated by volume/volume dilutions in AMP1 media of 50, 25, 12.5, 6.25 and 3.125% for HDPE; 10, 2, 1, 0.5 and 0.25% for PVC) alongside equivalent controls (AMP1 media with no leachate addition). The leachate dilutions used for growth and photophysiology monitoring were chosen following preliminary tests that indicated PVC leachate had a considerably greater effect than HDPE at equivalent concentrations. Growth was impaired for both Prochlorococcus MIT9312 and NATL2A across the full range of HDPE and PVC leachate dilutions tested, as measured by flow cytometric counts of chlorophyll fluorescent cells (Fig. 1). MIT9312 responded more quickly to both HDPE and PVC leachate exposure than NATL2A.

Graciela Iturbide, Visionary Ethnographer Consider the chickens, roosting at a vendor’s feet as he reads the daily news; or a semi-circle of women clutching freshly plucked carcasses—wings outspread, headless, then bundled and hung. In the photography of Graciela Iturbide, animals appear in various stages of preparation: walleyed fish dangle in pairs; severed goats’ legs herringbone across a spread of drying mats. Iguanas wreathed around a woman’s stoic face—like tentacles, or the rays of an aureole—are destined for soup.

How to Fix the Supreme Court, Part One: C is for Clarence - PREVAIL by Greg Olear “If everyone made war only according to his own convictions, there would be no war,” Prince Andrei Bolkonsky thought… A good player who loses at chess is genuinely convinced that he has lost because of a mistake, and he looks for this mistake in the beginning of the game, but forgets that there were also mistakes at every step in the course of the game, that none of his moves was perfect. The mistake he pays attention to is conspicuous only because his opponent took advantage of it. —War and Peace (Leo Tolstoy, 1867)

Octopuses May Go Blind As Climate Change Sucks Oxygen Out of the Ocean Editor's Note: This story was updated at 11:20 a.m. E.D.T. on Friday, May 17 Turning light particles into visual information is hard work, and your body relies on oxygen to get the job done. This is true whether you walk the land on two limbs or swim through the sea with eight. In fact, according to a recent study in the Journal of Experimental Biology, the amount of oxygen available to marine invertebrates like squids, crabs and octopuses may be far more important to their vision than previously thought.

Why wealth equality remains out of reach for black Americans Black History Month has become the time to reflect on all the progress black Americans have made, but the sobering reality is that when it comes to wealth – the paramount indicator of economic security – there has been virtually no progress in the last 50 years. Based on data from the Federal Reserve’s Survey of Consumer Finance, the typical black family has only 10 cents for every dollar held by the typical white family. While there is no magic bullet for racism, access to wealth, and the security to pass it down from one generation to the next, would go a long way toward changing the economic trajectory for blacks. As researchers who study historical and contemporary racial inequality, we mostly conceive of wealth as a maker of success, but its true value is functional: the independence and economic security that it provides. Out of slavery Until the end of legal slavery in the U.S., enslaved people were considered valuable assets and a form of wealth.

Fact-checking Hawley’s claim about Pennsylvania’s election law Sen. Josh Hawley of Missouri led the Senate charge against the electoral college certification of Joe Biden’s victory. Much of his argument was based on changes to mail-in voting in Pennsylvania. Hawley said that he objected to Biden’s win because Pennsylvania failed to follow its own state election laws. Richest 1% on target to own two-thirds of all wealth by 2030 The world’s richest 1% are on course to control as much as two-thirds of the world’s wealth by 2030, according to a shocking analysis that has lead to a cross-party call for action. World leaders are being warned that the continued accumulation of wealth at the top will fuel growing distrust and anger over the coming decade unless action is taken to restore the balance. An alarming projection produced by the House of Commons library suggests that if trends seen since the 2008 financial crash were to continue, then the top 1% will hold 64% of the world’s wealth by 2030.

One billion year old fungi found are Earth's oldest Scientists have unearthed fossilised fungi dating back up to one billion years, in a discovery that could reshape our understanding of how life on land evolved, research showed Wednesday. For decades, the earliest known fungi—organisms such as mushrooms, mould and yeast—was thought to have appeared on earth around half a billion years ago. But recent fossil specimens unearthed in Canada and analysed using the latest dating technology appear to push back fungi's arrival to the earliest reaches of life on land.