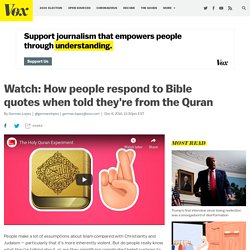 But do people really know what they're talking about, or are they simplifying complicated belief systems to make a political point? The team at Dit Is Normaal decided to put this to the test in the Netherlands, where they're based. So they disguised a Bible as a Quran, read verses from the Bible (such as "You will have to cut off her hand"), and asked people for their thoughts. People by and large reacted with a lot of "othering" of Muslims — making remarks like, "If you've been raised with this book and these kinds of thoughts, it's going to influence the way you think. " Then they found out the verses came from the Bible, not the Quran. The general lesson here isn't that all religions are bad and everyone should feel bad. If you read the Bible front and back, you will read about several ideas that frankly don't mesh with modern Western standards.

The Secret History of Muslims in the U.S. How Muslims, Often Misunderstood, Are Thriving in America. This story appears in the May 2018 issue of National Geographic magazine.

This story is part of Diversity in America, a National Geographic series covering racial, ethnic, and religious groups and examining their changing roles in 21st-century life. Tell us your story with #IDefineMe. There was nothing to do but watch as the copper-domed building in the southern Texas oil town of Victoria burned down. The mosque where Abe Ajrami’s Beyoncé-loving daughter was feted with other high school graduates, the mosque where his children went to religion classes, the mosque where he and his family went every Friday to pray and mingle over a potluck of seven-layer dip and spiced biryani, was gone. “I was trying not to break down,” says Ajrami, a Palestinian American who raced to the mosque after getting a phone call in the dead of night.

This family reminds me of my own. Born to a poor family in the Gaza Strip, Ajrami studied nursing because it was all he could afford. Any mapping of U.S. History Detectives. When the first Muslims came to the land that would become the United States is unclear. 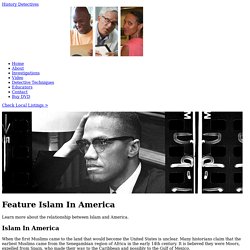 Many historians claim that the earliest Muslims came from the Senegambian region of Africa in the early 14th century. It is believed they were Moors, expelled from Spain, who made their way to the Caribbean and possibly to the Gulf of Mexico. When Columbus made his journey to the United States, it is said he took with him a book written by Portuguese Muslims who had navigated their way to the New World in the 12th century.

Others claim there were Muslims, most notably a man named Istafan, who accompanied the Spanish as a guide to the New World in the early 16th century in their conquest of what would become Arizona and New Mexico. Muslims and Islam: Key findings in the U.S. and around the world. Try our email course on Muslims and Islam Learn about Muslims and Islam through four short lessons delivered to your inbox every other day.Sign up now! 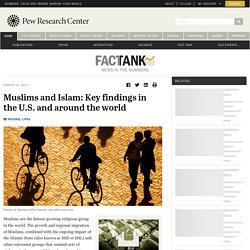 Muslims are the fastest-growing religious group in the world. The growth and regional migration of Muslims, combined with the ongoing impact of the Islamic State (also known as ISIS or ISIL) and other extremist groups that commit acts of violence in the name of Islam, have brought Muslims and the Islamic faith to the forefront of the political debate in many countries. Yet many facts about Muslims are not well known in some of these places, and most Americans – who live in a country with a relatively small Muslim population – have said they know little or nothing about Islam.

Here are answers to some key questions about Muslims, compiled from several Pew Research Center reports published in recent years: How many Muslims are there? The Muslim population in Europe also is growing; we project 10% of all Europeans will be Muslims by 2050. U.S.