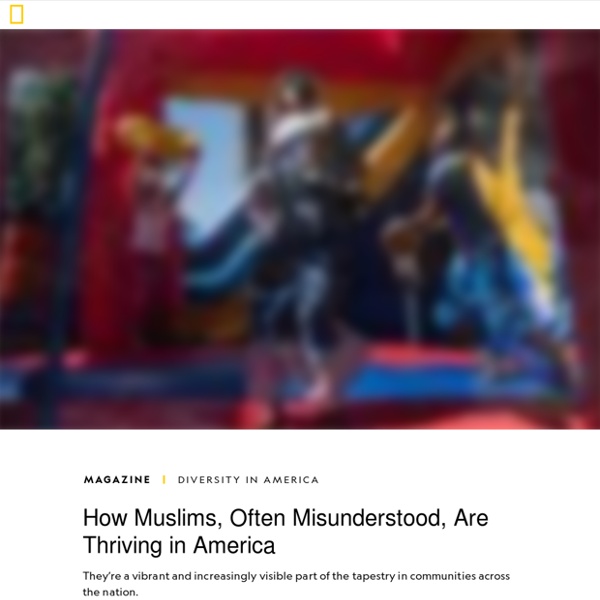 This story appears in the May 2018 issue of National Geographic magazine. This story is part of Diversity in America, a National Geographic series covering racial, ethnic, and religious groups and examining their changing roles in 21st-century life. Tell us your story with #IDefineMe. There was nothing to do but watch as the copper-domed building in the southern Texas oil town of Victoria burned down. The mosque where Abe Ajrami’s Beyoncé-loving daughter was feted with other high school graduates, the mosque where his children went to religion classes, the mosque where he and his family went every Friday to pray and mingle over a potluck of seven-layer dip and spiced biryani, was gone. “I was trying not to break down,” says Ajrami, a Palestinian American who raced to the mosque after getting a phone call in the dead of night. This family reminds me of my own. Born to a poor family in the Gaza Strip, Ajrami studied nursing because it was all he could afford. Any mapping of U.S.

Related:  All Strangers Till We Meet • Islam • Islam • Religion

'Europe Does Not See Us As Human': Stranded Refugees Struggle In Greece : Parallels Rasha al-Ahmed imagined Europe would be a clean, generous place — not a makeshift tent in an olive grove where the mud is mixed with human waste and rotting food. "A safe life with a house and enough food," she said, shuddering as she wiped fetid mud from her 1-year-old daughter's cheeks. "That's what I hoped for when I crossed the sea from Turkey to Greece." Ahmed is 25, tall and no-nonsense, with three young children and a wise-cracking husband, Waleed, who worked as an ironsmith and roofer in Deir Ezzor, the city in eastern Syria where they're from. They left Syria in November, worn down by a war that, after seven years, appears to have no end in sight. They tried to live in Izmir, Turkey, but after only a month there, they felt trapped.

Islamophobia: Understanding Anti-Muslim Sentiment in the West Introduction A phobia, according to the Merriam-Webster dictionary, is an exaggerated, usually inexplicable and illogical fear of a particular object, class of objects, or situation. It may be hard for the afflicted to sufficiently determine or communicate the source of this fear, but it exists. In recent years, a specific phobia has gripped Western societies - Islamophobia. Researchers and policy groups define Islamophobia in differing detail, but the term's essence is essentially the same, no matter the source: An exaggerated fear, hatred, and hostility toward Islam and Muslims that is perpetuated by negative stereotypes resulting in bias, discrimination, and the marginalization and exclusion of Muslims from social, political, and civic life.[1]

History Detectives When the first Muslims came to the land that would become the United States is unclear. Many historians claim that the earliest Muslims came from the Senegambian region of Africa in the early 14th century. It is believed they were Moors, expelled from Spain, who made their way to the Caribbean and possibly to the Gulf of Mexico. Which Country Reads the Most? On this episode, map nerd John Green shares a few things you might not know about maps. Don't miss an episode—subscribe here! (Images and footage provided by our friends at Shutterstock.

Islam - Five Pillars, Nation of Islam & Definition Islam is the second largest religion in the world after Christianity, with about 1.8 billion Muslims worldwide. Although its roots go back further, scholars typically date the creation of Islam to the 7th century, making it the youngest of the major world religions. Islam started in Mecca, in modern-day Saudi Arabia, during the time of the prophet Muhammad’s life. Today, the faith is spreading rapidly throughout the world. Islam Facts The word “Islam” means “submission to the will of God.”Followers of Islam are called Muslims.Muslims are monotheistic and worship one, all-knowing God, who in Arabic is known as Allah.Followers of Islam aim to live a life of complete submission to Allah.

China's memes reflect anxiety - haves and have-nots click 2x The first time Nick Mullins entered Deep Mine 26, a coal mine in southwestern Virginia, the irony hit him hard. Once, his ancestors had owned the coal-seamed cavern that he was now descending into, his trainee miner hard-hat secure. His people had settled the Clintwood and George’s Fork area, along the Appalachian edge of southern Virginia, in the early 17th century. Around the turn of the 1900s, smooth-talking land agents from back east swept through the area, coaxing mountain people into selling the rights to the ground beneath them for cheap. One of Mullins’ ancestors received 12 rifles and 13 hogs—one apiece for each of his children, plus a hog for himself—in exchange for the rights to land that has since produced billions of dollars worth of coal. “I probably ended up mining a lot of that coal,” says Mullins, a broad-shouldered, bearded 38-year-old with an easy smile.

Muhammad and the Faith of Islam [ushistory.org] courtesy Muslim Students Association, University of Southern California This verse from the Qur'an, originally written in Arabic, translates "Muhammad is the Messenger of Allah" (Qur'an 48:29) A man meditating alone in a cave near Mecca received a religious vision. This vision laid the foundations for a new religion. The year was 610 and the man's name was Muhammad.

Watch: How people respond to Bible quotes when told they're from the Quran People make a lot of assumptions about Islam compared with Christianity and Judaism — particularly that it's more inherently violent. But do people really know what they're talking about, or are they simplifying complicated belief systems to make a political point? The team at Dit Is Normaal decided to put this to the test in the Netherlands, where they're based.

Bikers line up at girl's lemonade stand after mom helps save them during crash A group of 30 bikers visited one little girl's lemonade stand as a long-awaited thank you to her mom. The Milwaukee Iron motorcycle group of Kokomo, Indiana, lined up at 8-year-old Bryanne's stand after her mom, Daryn Sturch, a nurse, helped them after a highway crash. "When I pulled up, it looked like one of them had lost control and their bikes [got] tangled," Sturch of Denver, Indiana, told "Good Morning America." "I parked a ways away so my daughter wouldn't see and I ran up.

eu.usatoday America's Islamic Heritage Museum begins in the 1500s and explores the contributions of American Muslims through the 21st century. USA TODAY WASHINGTON – One of the greatest stories rarely told about the long history of Muslim immigration to the United States stretching back hundreds of years is actually being told most days by Amir Muhammad, the founder and chief curator of America’s Islamic Heritage Museum, a tiny institution with a do-it-yourself collector’s vibe and a modest entrance fee that sits in an out-of-the-way corner of southeast Washington, D.C. But, in an age of American political sectarianism when immigrant and minority-rights groups and U.S. lawmakers have blasted President Donald Trump’s incendiary comments, not many people are paying attention to the story Muhammad is revealing about the Muslim experience.

The Five Pillars of Islam The Five Pillars are the core beliefs and practices of Islam: Profession of Faith (shahada). The belief that "There is no god but God, and Muhammad is the Messenger of God" is central to Islam.