I grew up in an off-the-grid Christian commune. Here's what I know about America's religious beliefs 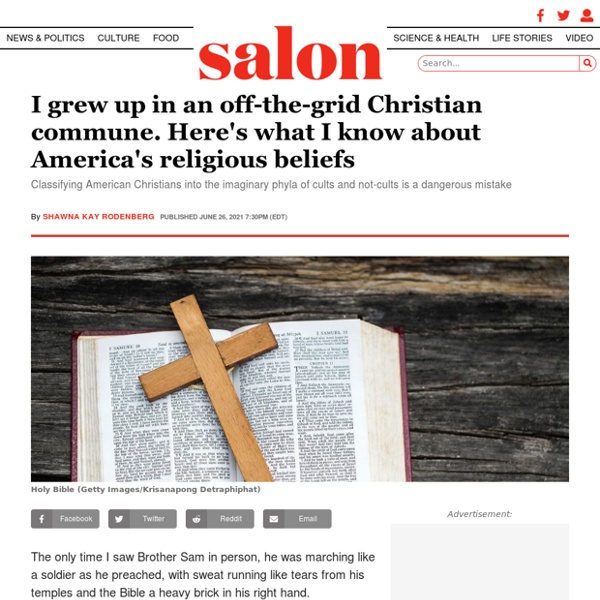 The only time I saw Brother Sam in person, he was marching like a soldier as he preached, with sweat running like tears from his temples and the Bible a heavy brick in his right hand. It was 1978, I was five, and my family had traveled to Lubbock, Texas, for a Body Convention, which was what we called the semi-annual gatherings of hundreds, sometimes thousands, of members of The Body, or Body of Christ, an expansive network of charismatic communities created almost singlehandedly by Brother Sam. My family lived on a Body Farm, a mostly off-grid outpost on the northern shore of Lake Superior, where I grew up singing, clapping, hollering and dancing in the Tabernacle aisles as shamelessly as King David. If this were a face-to-face conversation, you might stop me here, as many have. But, only a couple years ago, Franklin Graham, son of "America's Pastor," Billy Graham, declared any criticism of former president Donald Trump to be the work of demonic powers.

Arizona ballot audit backed by secretive donors linked to Trump’s inner circle Dark money groups tied to Donald Trump’s inner circle and backed by people who have spread baseless claims about the 2020 presidential election appear to be playing a key role in funding an unprecedented review of 2.1m ballots in Arizona. Republicans in the Arizona state senate, which authorized the inquiry, allocated $150,000 in state funds to pay for it – just a fraction of the projected overall cost, which is still unknown. The state senate had enough money in its operating budget to pay for the investigation, the Arizona Mirror reported in April, but chose not to pay the full price.

Pocket - Poor teeth click 2x I am bone of the bone of them that live in trailer homes. I grew up next to Tiffany ‘Pennsatucky’ Doggett, the hostile former drug addict from the prison TV drama Orange Is the New Black. I know her by her teeth. Pennsatucky – a scrappy slip of a woman menacing, beating and proselytising to fellow inmates – stole the show during the first season of the Netflix prison series. But amid an ensemble cast of similarly riveting, dangerous characters, it was her grey, jagged teeth that shocked viewers into repulsed fixation. She was the villain among villains, a monster that fans loved to hate; ‘Pennsatucky teeth’ became a pejorative in social media.

Why Biden plans to reverse Trump’s Alaska policy in the Tongass National Forest On Friday the Biden administration revealed plans to reinstate environmental protections preventing logging and mining in Alaska’s Tongass National Forest, which the Trump administration had discarded. The 17 million acres in southeastern Alaska — the largest national forest in the US — have been a political battleground for over two decades, bouncing back and forth between the interests of logging industries and climate activists. In 2001, President Bill Clinton finalized the “roadless rule,” which prohibited road construction on 60 million acres of forested land across the US and heavily restricted commercial logging and mining.

How a powerful US lobby group helps big oil to block climate action When Royal Dutch Shell published its annual environmental report in April, it boasted that it was investing heavily in renewable energy. The oil giant committed to installing hundreds of thousands of charging stations for electric vehicles around the world to help offset the harm caused by burning fossil fuels. On the same day, Shell issued a separate report revealing that its single largest donation to political lobby groups last year was made to the American Petroleum Institute, one of the US’s most powerful trade organizations, which drives the oil industry’s relationship with Congress. Contrary to Shell’s public statements in support of electric vehicles, API’s chief executive, Mike Sommers, has pledged to resist a raft of Joe Biden’s environmental measures, including proposals to fund new charging points in the US.

Can Religion Guide the Ethics of A.I.? “Alexa, are we humans special among other living things?” One sunny day last June, I sat before my computer screen and posed this question to an Amazon device 800 miles away, in the Seattle home of an artificial intelligence researcher named Shanen Boettcher. At first, Alexa spit out a default, avoidant answer: “Sorry, I’m not sure.” But after some cajoling from Mr. Boettcher (Alexa was having trouble accessing a script that he had provided), she revised her response. A Black Writer Found Tolerance in France, and a Different Racism When William Gardner Smith submitted what would be his final novel, THE STONE FACE (New York Review Books, paper, $16.95), to a French publisher, his friend and biographer LeRoy Hodges recalled, the editor told Smith it was “very courageous to have written the book, but we can’t publish it in France.” How could a courageous novel by an established writer have met with such immediate dismissal? In America, “The Stone Face” (1963) had been accepted by Farrar, Straus, like Smith’s three previous novels. Why not France? The answer is more complicated than the rejection.

'Botched': Arizona GOP's ballot count ends, troubles persist PHOENIX (AP) — Arizona Republicans’ partisan review of the 2020 election results got off to a rocky start when their contractors broke rules for counting ballots and election experts warned the work was dangerous for democracy. When the auditors stopped the counting and returned the ballots this week, it hadn’t gotten better. In the last week alone, the only audit leader with substantial election experience was locked out of the building, went on the radio to say he was quitting, then reversed course hours later. Woman Gets Shamed For Breastfeeding Son In Public, Thousands Of People Stand Up For Her It is not uncommon for a natural activity to be turned into a social taboo. In many ways, the female body is particularly laden with rules and regulations attempting to control our life experiences. Often we must oblige, or we are viewed as “divergent,” “rebellious,” or even “disobedient.” Well, one woman had just about enough of the breastfeeding shaming from both a specific woman, and society, so she decided to do something about it. Ashley Kaidel was enjoying a meal at a restaurant when her baby starting showing signs of hunger. So, Ashley began to breastfeed her child at the table, but another woman began to shame Kaidel with her eyes, darting looks of disgust.

How The Representation Of Boobs Has Changed Through Art History - Art - Art Evolution scientists have discussed for quite a long time the reason behind the existence of breasts. Some believe they just exist because of the biological aspect of breastfeeding. The counterpart, believes that while that biological approach is obvious, it doesn’t really explain why women’s breasts are the only ones in the animal kingdom that grow even when women are not pregnant.

The Big Money Behind the Big Lie Anderson, of Heritage, declined to respond to questions about the group’s collaborations with Hoffman, instead sending a prepared statement: “After a year when voters’ trust in our elections plummeted, restoring that trust should be the top priority of legislators and governors nationwide. That’s why Heritage Action is deploying our established grassroots network for state advocacy for the first time ever. There is nothing more important than ensuring every American is confident their vote counts—and we will do whatever it takes to get there.” Hoffman, who formerly served as a town-council member in Queen Creek, a deeply conservative part of Maricopa County, did not respond to requests for comment.

David Attenborough Netflix documentary: Australian scientists break down in tears over climate crisis One of Australia’s leading coral reef scientists is seen breaking down in tears at the decline of the Great Barrier Reef during a new Sir David Attenborough documentary to be released globally on Friday evening. Prof Terry Hughes is recounting three coral bleaching monitoring missions in 2016, 2017 and 2020 when he says: “It’s a job I hoped I would never have to do because it’s actually very confronting …” before tears cut him short. The emotional scene comes during the new Netflix documentary, Breaking Boundaries: The Science of Our Planet, and shows the toll the demise of the planet’s natural places is having on some of the people who study them. The film visits scientists working on melting ice, the degradation of the Amazon, and the loss of biodiversity, and looks at a 2019/2020 “summer from hell” for Australia that featured unprecedented bushfires and the most widespread bleaching of corals ever recorded on the Great Barrier reef.

Michelle Wie West Was Ready to Retire. Then She Got Mad. Wie West has sought out other athletes who fought for change, including Renee Powell, one of the first African American members of the L.P.G.A., and the tennis icon Billie Jean King, who described how her threat to boycott the U.S. Open in 1973 as the defending women’s champion spurred the tournament to become the first of the Grand Slam events to pay men and women equally for their victories. Wie West has compared notes with W.N.B.A. standout and players’ association president, Nneka Ogwumike, whose undergraduate years at Stanford overlapped with hers. The Trump Clown Car Has a Smashup in Arizona In an independent evaluation of the process, Barry Burden, the head of the Elections Research Center at the University of Wisconsin-Madison, and Trey Grayson, a former Republican secretary of state in Kentucky, detailed the review’s many “maladies.” “They include processing errors caused by a lack of basic knowledge, partisan biases of the people conducting the audit, and inconsistencies of procedures that undermine the reliability of the review and any conclusions they may draw. In particular, the operation lacks the consistency, attention to detail and transparency that are requirements for credible and reliable election reviews.” Even some Republican officials have had enough. In May, the Maricopa County Board of Supervisors, a Republican-dominated body, accused state lawmakers of having “rented out the once good name of the Arizona State Senate” to “grifters.” If only.