FQ3: How do modern Muslim women in western countries deal with everyday challenges?

What the Koran really says about women. When Middle East correspondent Carla Power began studying the Koran with a conservative Islamic scholar, she wasn’t expecting to learn that it nowhere advocates the oppression of women - or that Islam has a rich history of forgotten female leaders By Carla Power, Saturday 6 November 2015 When I was eleven years old, I bought a tiny book containing a verse from the Koran from a stall outside a Cairo mosque. 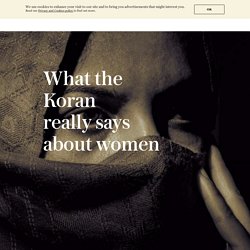 I was neither Muslim nor literate in Arabic; I bought it for its dainty proportions. The stall’s proprietress watched me bemusedly as I cooed over the matchbox-sized object. I found it over a quarter century later, one sticky summer afternoon in St. Cultural myths regarding Islam: In conversation with Leila Ahmed. By Yasmin Merchant With the recent “Muslim ban” fiasco in the U.S., polls that suggest many Europeans may support similar legislation in their countries, and reports that claim the number of Islamophobic hate crimes against women who wear a hijab has spiked, it is not easy to be a Western Muslim. 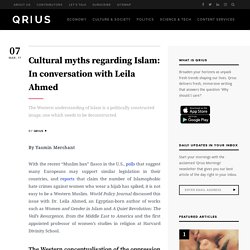 World Policy Journal discussed this issue with Dr. Leila Ahmed, an Egyptian-born author of works such as Women and Gender in Islam and A Quiet Revolution: The Veil’s Resurgence, from the Middle East to America and the first appointed professor of women’s studies in religion at Harvard Divinity School. The Western conceptualisation of the oppression of Islam. If you want to know about Muslim women's rights, ask Muslim women. Within minutes of arriving to collect my professionally bound thesis, I found myself on the receiving end of an unsolicited and impenetrable rant about female genital mutilation. 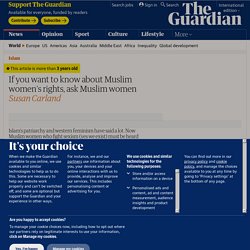 “What’s your paper on?” The shop owner inquired. “It’s on Muslim women and … ,” I began, but before I could finish my sentence, he had launched into the subject. The fact that I hadn’t even mentioned the words “female genital mutilation” was irrelevant; merely saying “Muslim women” was a wide enough rabbit hole for him to dart down. My presence as a Muslim woman and my half-delivered topic were the only encouragement he needed. That he felt authorised to deliver a lecture to me about his understanding of the allegedly sexist treatment of women in Islam, the very subject of my years-long PhD dissertation, didn’t surprise me. It’s uncanny how often people try to demonstrate their concern about the alleged oppression of Muslim women by humiliating them. Journalist: So what do you do? Powerful Muslim women in history are often ignored.

We are at a moment in time when there is a massive and growing movement of advocacy and activism around the world to achieve gender parity, to dismantle injustices and we have louder and louder voices calling out sexual assault and harassment. 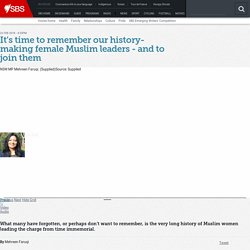 This is quite breathtaking and inspiring to see. It is also a very opportune time to reflect on the fact that throughout history, women across the world, from all walks of life, have either been leaders or been central to struggles for civil rights, environmental justice and equality. Women like seamstress Rosa Parks who is recognised as the ‘mother of the freedom movement’ because of her courageous refusal to give up her bus seat for a white passenger.

Biologist Rachel Carson whose bravery in persistently writing about human impacts on nature sparked the modern environmental movement more than 50 years ago. The Black Lives Matter movement was founded by women, namely Alicia Garza, Opal Tometi and Patrisse Cullors. But did we hear about her here? What does the Quran say about a hijab. Yassmin Abdel-Magied: What does my headscarf mean to you? If you want to know about Muslim women's rights, ask Muslim women. Religious literacy routs Islamophobia. The Harvard Divinity School calls it 'religious literacy' — that is, the knowledge and understanding of the tenets of the world religions and, in their words, 'the roles that religions play in human experience across political, economic, and cultural spheres'. 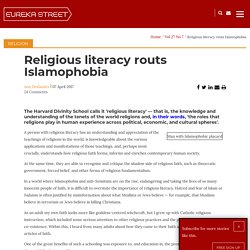 A person with religious literacy has an understanding and appreciation of the teachings of religions in the world, is knowledgeable about the various applications and manifestations of those teachings, and, perhaps most crucially, understands how religious faith forms, informs and enriches contemporary human society. How Muslims, Often Misunderstood, Are Thriving in America. This story appears in the May 2018 issue of National Geographic magazine.

This story is part of Diversity in America, a National Geographic series covering racial, ethnic, and religious groups and examining their changing roles in 21st-century life. Tell us your story with #IDefineMe. There was nothing to do but watch as the copper-domed building in the southern Texas oil town of Victoria burned down. The mosque where Abe Ajrami’s Beyoncé-loving daughter was feted with other high school graduates, the mosque where his children went to religion classes, the mosque where he and his family went every Friday to pray and mingle over a potluck of seven-layer dip and spiced biryani, was gone. “I was trying not to break down,” says Ajrami, a Palestinian American who raced to the mosque after getting a phone call in the dead of night. This family reminds me of my own.

Born to a poor family in the Gaza Strip, Ajrami studied nursing because it was all he could afford.