Free AirTime & the rise of Trump 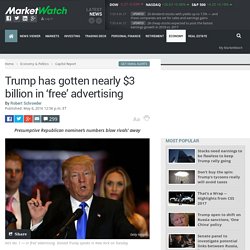 Trump, who became the presumptive Republican presidential nominee when last rivals Sen. Ted Cruz and Gov. John Kasich exited the race, has received the equivalent of more than $2.8 billion in free ads through April. That’s based on media coverage and the equivalent advertising rates. By comparison, Cruz, who dropped out on Tuesday, has received the equivalent of about $771 million since last May. The numbers are likely to add fuel to critics’ charges that Trump has gotten too much unpaid air time. CNN's President Says It Was A Mistake To Air So Many Trump Rallies And &quot;Let Them Run&quot; - BuzzFeed News. $2 Billion Worth of Free Media for Donald Trump By NICHOLAS CONFESSORE and KAREN YOURISH MARCH 15, 2016. Donald Trump Grabs More Free Airtime.

The satellite trucks and video cameras were ready Friday morning, hours before Donald Trump was slated to speak at his new hotel in Washington, D.C.’s Old Post Office building, just a few blocks down Pennsylvania Avenue from the White House. 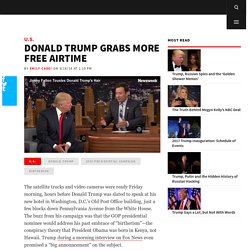 The buzz from his campaign was that the GOP presidential nominee would address his past embrace of “birtherism”—the conspiracy theory that President Obama was born in Kenya, not Hawaii. Trump during a morning interview on Fox News even promised a “big announcement” on the subject. Instead, the press and cable news viewers were treated to what amounted to an extended advertisement for Trump’s hotel and a series of testimonies from military veterans before finally—finally—Trump declared in his closing remarks, “President Barack Obama was born in the United States, period.

Now we want to get back to making America strong and great again. Thank you.” It was another master class in how to win free airtime. Try Newsweek for only $1.25 per week. Trump gets way more TV news time than Clinton. So what? Yes, Donald Trump has gotten more news coverage (at least the network TV kind) than Hillary Clinton. 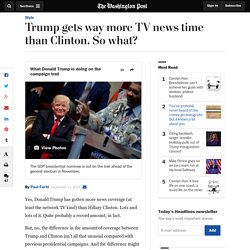 Lots and lots of it. Quite probably a record amount, in fact. But, no, the difference in the amount of coverage between Trump and Clinton isn’t all that unusual compared with previous presidential campaigns. And the difference might not mean much at all to voters, according to new research. The key stat: Trump’s campaign attracted 822 minutes of screen time on the nightly news broadcasts of ABC, CBS and NBC between Jan. 1 and Labor Day, according to the Tyndall Report, which has tracked broadcast news since 1987. Clinton’s campaign commanded just 386 minutes, which includes 89 minutes spent on the investigation of her emails as secretary of state. Cruz: You Guys Give Trump Free Media; Cooper: You Don’t Agree to Interviews! During CNN’s GOP town hall tonight, Ted Cruz called out CNN and other networks for giving Donald Trump a ton of free media, but Anderson Cooper said at least Trump agrees to interviews. 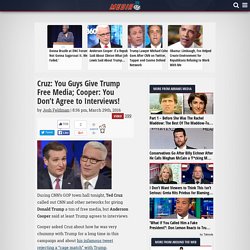 Cooper asked Cruz about how he was very chummy with Trump for a long time in this campaign and about his infamous tweet rejecting a “cage match” with Trump. Cruz said the media “was engaged in a love-fest” with The Donald and specifically asked how much free media CNN and Fox and other networks have gotten for all of their Trump interviews––”you let him call in.” Cannot load M3U8: crossdomain access denied (2048) <div>Please enable Javascript to watch. </div> Cooper countered, “We’ve asked you for interviews pretty much every day and you’ve declined every offer on my program.” Watch above, via CNN. [image via screengrab] At Fox News, It’s Chaos and Free Ads for Donald Trump. The banter about the new hosts on the two networks could not have been more different. 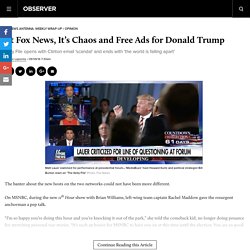 On MSNBC, during the new 11th Hour show with Brian Williams, left-wing team captain Rachel Maddow gave the resurgent anchorman a pep talk. “I’m so happy you’re doing this hour and you’re knocking it out of the park,” she told the comeback kid, no longer doing penance for stretching personal war stories. “It’s such an honor for MSNBC to have you on at this time until the election. You are so good at this and I’m really glad you’re here.” Over at Fox News, Brit Hume’s usually frowny face seemed to deepen into a scowl as he finished up his first On the Record show and explained why he was replacing Greta Van Susteren, whose abrupt departure deepened the grief of a top-rated network already reeling from an in-house sex scandal.

“She has left Fox News, saying today the place just didn’t feel like home anymore,” Hume said. Hume added that he will do the 7 p.m. hour only until the election.