Facebook. Amazon.com. How opld are homo - Bing. (3978) Lawrence Krauss: Best arguments against religion/faith #1. What Was God Doing Before Creation? One reason people give for rejecting a young universe is that they think it somehow limits God. 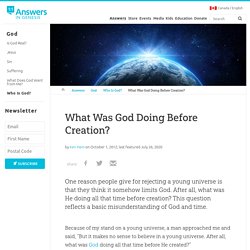 After all, what was He doing all that time before creation? This question reflects a basic misunderstanding of God and time. Because of my stand on a young universe, a man approached me and said, “But it makes no sense to believe in a young universe. After all, what was God doing all that time before He created?” I answered, “What time do you mean?”

The person answered, “Well, it doesn’t make sense to say that God has always existed, and yet He didn’t create the universe until just six thousand years ago.” I then went on to explain that because God has always existed, then it is meaningless to ask, “What was God doing all that time before He created?” Time Was Created with the Universe I then answered, “But you are missing the fact that there was no time before God created.” Time is actually a created entity. “In the beginning . . .” is when time began! So what was “before” creation? The Book of Enoch Banned from The Bible Tells the True Story of Humanity. eBook Cover Dimensions & File Size for Major Publishing Sites. What are the Correct eBook Cover Dimensions for the Major Pushing Sites This post provides the correct eBook cover dimensions and file size for major eBook publishing sites and where to find some of the information should their specifications change. 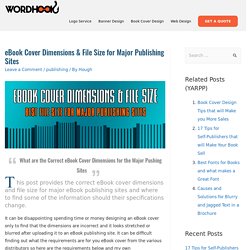 It can be disappointing spending time or money designing an eBook cover only to find that the dimensions are incorrect and it looks stretched or blurred after uploading it to an eBook publishing site. It can be difficult finding out what the requirements are for you eBook cover from the various distributors so here are the requirements below and my own recommendation. While the requirements differ for different eBook publishing sites based on my experience as a general rule eBook covers should be at least 1500 to 1,800 pixels wide and have heights that are around 1.5 greater than the width. Therefore if you have an eBook that is 1,700 pixels wide this would make the height 1,700 x 1.5 = 2550 pixels. Logo Redraw & Freelance Web Design, Ecommerce Blog. What are the Best Fonts for Books and what makes a Great Font? 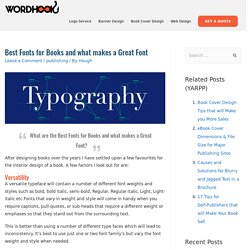 After designing books over the years I have settled upon a few favourites for the interior design of a book. A few factors I look out for are: Versatility A versatile typeface will contain a number of different font weights and styles such as bold, bold italic, semi-bold, Regular, Regular-italic, Light, Light-italic etc.Fonts that vary in weight and style will come in handy when you require captions, pull-quotes, or sub-heads that require a different weight or emphases so that they stand out from the surrounding text. This is better than using a number of different type faces which will lead to inconsistency. You will also want a font that uses real italics rather than Oblique. 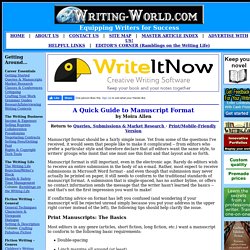 Yet from some of the questions I've received, it would seem that people like to make it complicated -- from editors who prefer a particular style and therefore declare that all editors want the same style, to writers' groups who insist that one must use this font and that layout and so forth. Manuscript format is still important, even in the electronic age. Intelligent design. A pseudoscientific argument for the existence of God Intelligent design (ID) is a pseudoscientific argument for the existence of God, presented by its proponents as "an evidence-based scientific theory about life's origins".[1][2][3][4][5] Proponents claim that "certain features of the universe and of living things are best explained by an intelligent cause, not an undirected process such as natural selection. 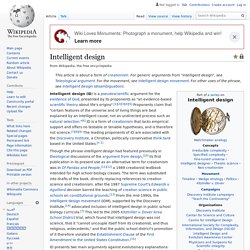 "[6] ID is a form of creationism that lacks empirical support and offers no testable or tenable hypotheses, and is therefore not science.[7][8][9] The leading proponents of ID are associated with the Discovery Institute, a Christian, politically conservative think tank based in the United States.

[n 1] Morals - Ethics Unwrapped. Morals are the prevailing standards of behavior that enable people to live cooperatively in groups. 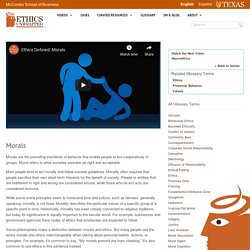 Moral refers to what societies sanction as right and acceptable. Most people tend to act morally and follow societal guidelines. Morality often requires that people sacrifice their own short-term interests for the benefit of society. People or entities that are indifferent to right and wrong are considered amoral, while those who do evil acts are considered immoral. While some moral principles seem to transcend time and culture, such as fairness, generally speaking, morality is not fixed. REQUEST A BOOK REVIEW - The Book Commentary. The Book Commentary reviews unpublished and published books —eBooks, short stories, audio books, short stories, and everything in-between. 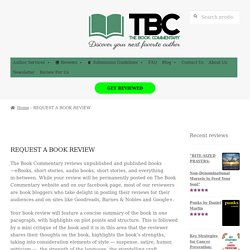 While your review will be permanently posted on The Book Commentary website and on our facebook page, most of our reviewers are book bloggers who take delight in posting their reviews for their audiences and on sites like Goodreads, Barnes & Nobles and Google+. Your book review will feature a concise summary of the book in one paragraph, with highlights on plot points and structure. This is followed by a mini critique of the book and it is in this area that the reviewer shares their thoughts on the book, highlights the book’s strengths, taking into consideration elements of style — suspense, satire, humor, witticism —, the strength of the language, the storytelling craft, character depth, and others. The review also comes with links to buy on Amazon and local bookstores. Note that we only post starred reviews on our website. About Religion in Ancient Greece. Written by GreekBoston.com in Ancient Greek History When we think about Greek mythology, we often assume that these are simply “just stories.” 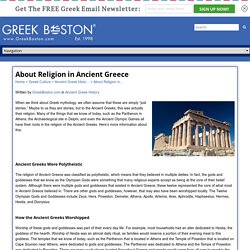 Maybe to us they are stories, but to the Ancient Greeks, this was actually their religion. (2154) Richard Dawkins: One Fact to Refute Creationism. (1902) Current Arguments for God. CES Letter. (1875) Why I Left the Mormon Church (& Why I’m Talking About It) (1787) ACSJ: David Fitzgerald - The Complete Heretic's Guide to Western Religion: Mormonism. (1787) The Neuroscience of Consciousness. (1787) What is Consciousness? What is Its Purpose? (1769) The Religions of Ancient Canaan and Phoenicia. (1741) Why Buddhism Is True. (1741) The Nature of Reality: A Dialogue Between a Buddhist Scholar and a Theoretical Physicist. 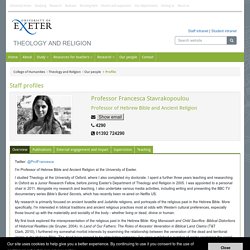 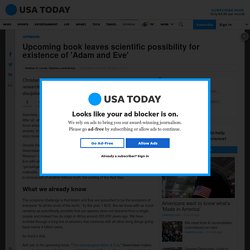 With this research, it is my hope they will attain a greater respect for the discipline. Scientists, even religious ones, rarely spend time analyzing religious creation myths. After all, when taken literally, these stories are usually in direct conflict with what we know about Earth’s natural history. When faith requires people to cling to those myths anyway, science is cast aside. One would be hard-pressed to think of a scriptural story more at odds with physical evidence than the Garden of Eden. Despite this, or perhaps because of it, a leading public scholar — Joshua Swamidass, a physician and genome scientist at Washington University in St. What we already know The scriptural challenge is that Adam and Eve are purported to be the ancestors of everyone “to all the ends of the earth,” by the year 1 BCE.

So there’s that. Swamidass is not peddling pseudoscience. Possibility, not proof Nathan H. 53 Photos. Evolution and the Fall eBook: Cavanaugh, William T., Smith, James K. A., Gulker, Michael: Amazon.co.uk: Kindle Store. This collection of essays addresses the apparent conflict between the increasingly credible evidence for evolution and the Biblical doctrine of the Fall.

The contributors are mostly cross-denominational Christian theologians, ethicists, and philosophers; there is one scientist (biology) and one historian. One of the most striking things about the book was the process. The contributors met together regularly over a three-year period for intellectual exchange, corporate worship, and spiritual formation. (1122) ACSJ: David Fitzgerald - The Complete Heretic's Guide to Western Religion: Mormonism. (1122) Hector Avalos: How Archaeology Killed Biblical History - Part 1 of 2. (1110) David Fitzgerald Skepticon 3 "Examining the Existence of a Historical Jesus" (1099) DEBATE: Mike Licona vs. Matt Dillahunty ("Was Jesus Raised from the Dead?") (1091) Richard Carrier - Testing Religion Claims with Science and History. (1083) Why Invent the Jesus? (1083) God is an Idiot: God's "Perfect" Plan - JT Eberhard - Skepticon 7.

Creating an eBook with Scrivener. This information is based on but with extra stuff and many changes. I have stolen with both hands from everyone where appropriate. See also:Full book and free teaser book from one source file! This doc is about using Scrivener to prepare two versions of your ePub: one complete, and one free sample that contains only a part of the manuscript.You’ll prepare the manuscript, select the parts of it that will be in the free sample, compile the two files, test them, and make any necessary tweaks in Calibre. Then you’ll export the .mobi (Kindle) version using Calibre.This work has to be done on the Mac. The PC version of Scrivener doesn’t have the functionality yet. The In this example the title prefix is the word “Chapter” and then “<$t>” and a colon. What is a Cherub? The Cherubim in the Bible. What is a Cherub? The Cherubim in the Bible A Cherub, or known in the plural form as Cherubim, is symbolical angelic figure repeatedly mentioned in the Bible.

Cherubim are described as serving the will of God, performing divine duties in the earthly realm. Their initial responsibility was protecting the Garden of Eden as referenced in the book of Genesis. Discover further scripture references to the Cherub and their relation to other angelic beings including Lucifer before his fall. (1) How does the Jehovah's Witnesses governing body profit monetarily?

(577) Francesca Stavrakopoulou: When It's Wrong To Be An Atheist. (563) Francesca Stavrakopoulou, Tom Holland: Speaking freely about religion (World Humanist Congress) (509) Behave as if You Are the First Here. The Bible Says Jesus Was Real. What Other Proof Exists? While billions of people believe Jesus of Nazareth was one of the most important figures in world history, many others reject the idea that he even existed at all. A 2015 survey conducted by the Church of England, for instance, found that 22 percent of adults in England did not believe Jesus was a real person.

Among scholars of the New Testament of the Christian Bible, though, there is little disagreement that he actually lived. Lawrence Mykytiuk, an associate professor of library science at Purdue University and author of a 2015 Biblical Archaeology Review article on the extra-biblical evidence of Jesus, notes that there was no debate about the issue in ancient times either. “Jewish rabbis who did not like Jesus or his followers accused him of being a magician and leading people astray,” he says, “but they never said he didn’t exist.”