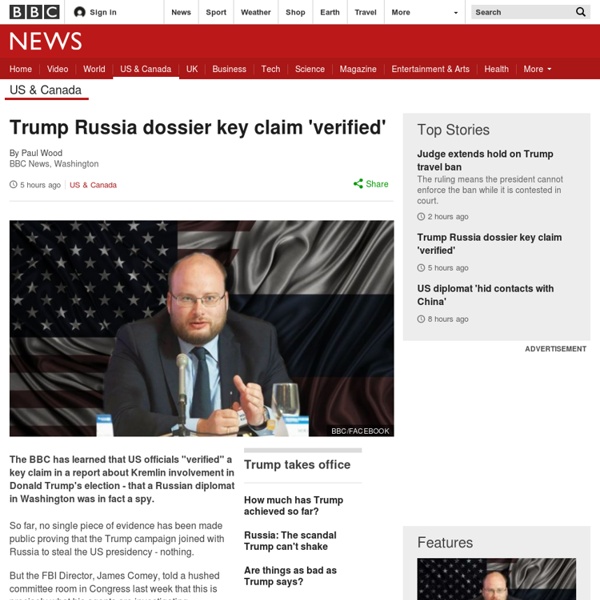 Image copyright BBC/Facebook The BBC has learned that US officials "verified" a key claim in a report about Kremlin involvement in Donald Trump's election - that a Russian diplomat in Washington was in fact a spy. So far, no single piece of evidence has been made public proving that the Trump campaign joined with Russia to steal the US presidency - nothing. But the FBI Director, James Comey, told a hushed committee room in Congress last week that this is precisely what his agents are investigating. Stop to let that thought reverberate for a moment. "Investigation is not proof," said the president's spokesman. Trump's supporters are entitled to ask why - with the FBI's powers to subpoena witnesses and threaten charges of obstructing justice - nothing damning has emerged. Perhaps there is nothing to find. The roadmap for the investigation, publicly acknowledged now for the first time, comes from Christopher Steele, once of Britain's secret intelligence service MI6. Image copyright Getty Images

4/2017: How Ex-Spy Steele Compiled His Explosive Trump-Russia Dossier There’s a row of Victorian terraced houses on a side street in London’s Belgravia district, each projecting a dowdy respectability with its stone front steps leading to a pair of alabaster pillars and then a glossy black door. And at 9–11 Grosvenor Gardens there is a small, rectangular brass plate adjacent to the formidable door. Its dark letters discreetly announce: ORBIS BUSINESS INTELLIGENCE, LTD. By design, the company’s title was not very forthcoming. Orbis, of course, is Latin for “circle” and, by common parlance, “the world.” But “intelligence”—that was more problematic. The Perfect Weapon: How Russian Cyberpower Invaded the U.S. “I had no way of differentiating the call I just received from a prank call,” Mr. Tamene wrote in an internal memo, obtained by The New York Times, that detailed his contact with the F.B.I. It was the cryptic first sign of a cyberespionage and information-warfare campaign devised to disrupt the 2016 presidential election, the first such attempt by a foreign power in American history. What started as an information-gathering operation, intelligence officials believe, ultimately morphed into an effort to harm one candidate, Hillary Clinton, and tip the election to her opponent, Donald J. Trump.

11/16/17: Hicks may hold the keys to Mueller's Russia puzzle Special counsel Robert Mueller’s team is preparing to interview the woman who’s seen it all: Hope Hicks. She’s been part of Donald Trump’s inner circle for years, first at Trump Tower and then as an omnipresent gatekeeper and fixer who could get emails or other communications directly to the boss during the 2016 campaign. Story Continued Below As a senior White House adviser and now as communications director, she’s been in the room for moments critical to Mueller’s probe, which has grown to include the president’s response to the Russia investigation itself.

1/15/17: Conway: Russian Hacking Investigation Should Be Kept Secret To 'Protect The Public' <a class="icopyright-article-tools-noscript" href=" target="_blank" title="Main menu of all reuse options"><img height="25" width="27" border="0" align="bottom" alt="[Reuse options]" src=" Click here for reuse options! </a> During part of a lengthy interview on this Sunday's Fox & Friends, incoming Trump propagandist in chief, Kellyanne Conway was asked whether or not her boss would like to fire FBI Director James Comey after he's sworn in later this week, and Conway told the crew on the curvy couch that she's very concerned that the American people are going to be harmed by all of these leaks. I'm always disappointed at just how public and sometimes political some of these figures seem to be.

7/14/18: Mueller probe: 12 Russians indicted for DNC hack All 12 defendants are members of the GRU, a Russian federation intelligence agency within the main intelligence directorate of the Russian military, who were acting in "their official capacities." The revelations provide more detail on the sophisticated assault on the US election in 2016, including the release of emails designed to damage Democratic presidential candidate Hillary Clinton. Trump is due to meet Russian President Vladimir Putin -- who has denied election meddling -- in Helsinki on Monday for a summit that includes a one-on-one meeting with only interpreters present. White House press secretary Sarah Sanders said Friday the summit will not be canceled.

11/14: Flake threatens to vote against judges after GOP blocks Mueller protection bill Flake made the new judicial threat after he and Sen. Chris Coons, a Delaware Democrat, unsuccessfully attempted to force a Senate vote on the special counsel legislation Wednesday. Senate Majority Leader Mitch McConnell objected to the request for a vote from Flake. But the Arizona Republican's threats on judicial nominees could complicate matters in the Judiciary Committee, where Republicans have an 11-10 majority. There are currently 21 judicial nominees pending in the committee and 32 who are awaiting a floor vote, Flake said. "We have been told that the bill that Sen.

11/29: Michael Cohen-Trump Tower Moscow Deal: Everything We Know After President’s Ex-Lawyer Admits Lying to Congress President Donald Trump’s former personal lawyer and longtime fixer Michael Cohen pleaded guilty on Thursday to lying to Congress about Trump’s efforts to open a Trump Tower in Moscow. Cohen admitted that he had lied about the timeline of negotiations for opening a Trump Tower in Russia, and revealed that negotiations to launch the real estate project were still ongoing as late as June 2016. Trump had been floating the idea of building a Trump Tower Moscow since his first visit to Russia, then a republic in the Soviet Union, in the 1980s, but the project consistently fell through. It is now clear that Trump continued his efforts to build the tower while he was running for president. Here’s what we know about the timeline for the latest attempt to open a Trump Tower in Moscow:

11/27/18: Manafort held secret talks with Assange in Ecuadorian embassy, sources say Donald Trump’s former campaign manager Paul Manafort held secret talks with Julian Assange inside the Ecuadorian embassy in London, and visited around the time he joined Trump’s campaign, the Guardian has been told. Sources have said Manafort went to see Assange in 2013, 2015 and in spring 2016 – during the period when he was made a key figure in Trump’s push for the White House. In a statement, Manafort denied meeting Assange. He said: “I have never met Julian Assange or anyone connected to him. I have never been contacted by anyone connected to WikiLeaks, either directly or indirectly.

10/19: Justice Dept. Discontent Over Sessions’s Approach The president has also frequently targeted Rod J. Rosenstein, who as deputy attorney general oversees the day-to-day operations at the department as well as the special counsel investigation. In a turnabout this month, Mr.