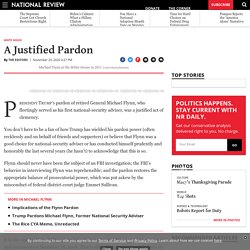 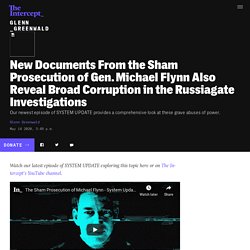 Michael Flynn, President Obama’s former director of the Defense Intelligence Agency and President Donald Trump’s former national security adviser, pleaded guilty on December 1, 2017, to a single count of lying to the FBI about two conversations he had with Russian Ambassador Sergey Kislyak while Flynn served as a Trump transition team official (Flynn was never charged for any matters relating to his relationship with the Turkish government). 10 Ways to Call Something Russian Disinformation Without Evidence - Reporting by Matt Taibbi. How do you call something “Russian disinformation” when you don’t have evidence it is? 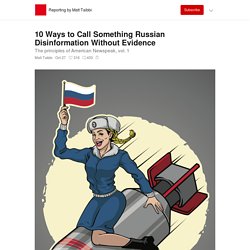 Jared Kushner & Middle East Peace Deals: Critics Were Clueless. Rarely has so much mockery been directed at an approach that ultimately achieved a breakthrough. 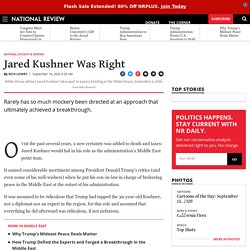 Over the past several years, a new certainty was added to death and taxes: Jared Kushner would fail in his role as the administration’s Middle East point man. It caused considerable merriment among President Donald Trump’s critics (and even some of his well-wishers) when he put his son-in-law in charge of brokering peace in the Middle East at the outset of his administration. Cancel Culture Is Real – Difficult Run. Last month, Harper’s published an anti-cancel culture statement: A Letter on Justice and Open Debate.The letter was signed by a wide variety of writers and intellectuals, ranging from Noam Chomsky to J. 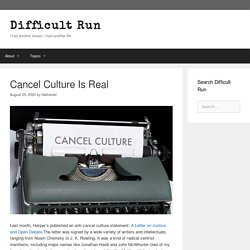 K. Rowling. Hydroxychloroquine: A Morality Tale - Tablet Magazine. Not only are lay people confused; professionals are. 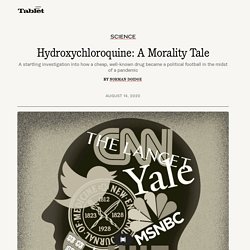 All that seems certain is that there is something disturbing going on in our science, and that if and when the “perfect study” were to ever come along, many won’t know what to believe. We live in a culture that has uncritically accepted that every domain of life is political, and that even things we think are not political are so, that all human enterprises are merely power struggles, that even the idea of “truth” is a fantasy, and really a matter of imposing one’s view on others. For a while, some held out hope that science remained an exception to this.

That scientists would not bring their personal political biases into their science, and they would not be mobbed if what they said was unwelcome to one faction or another. The Cult Dynamics of Wokeness - New Discourses. The Mobs Are Coming for the Progressives. Master Cleanse - Tablet Magazine. This book inspired me to continue on the journey of personal growth that I’ve been on and gave me some fresh new perspectives to consider. 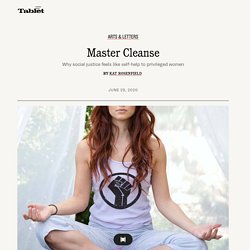 It is a resource and a guide; like having a learned teacher with you in the intimacy of your own home as you confront some of the most troubling and critical truths about yourself. It wants you to meet your full potential, but YOU have to DO the work. The Arts of Government Criminality. Destroying or altering evidence, lying under oath, leaking classified info … but no pre-dawn televised raid for any of the wrongdoers. 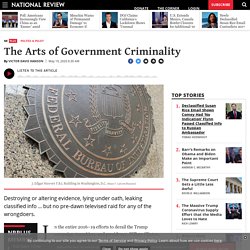 NRPLUS MEMBER ARTICLE I n the entire 2016–19 efforts to derail the Trump campaign, transition, and presidency, Hillary Clinton, Christopher Steele, and the FBI, Department of Justice, CIA, and other government bureaus have consistently sought to distort reality. Some of our best and brightest have destroyed evidence, altered documents, lied, leaked, and pled amnesia when questioned about their reprehensible conduct. At each stage, they were aided and abetted by a compliant media. The Inevitable Coronavirus Censorship Crisis is Here - Reporting by Matt Taibbi. 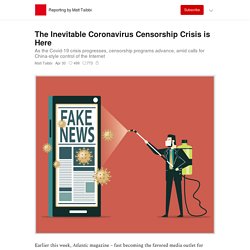 The headline: Internet Speech Will Never Go Back to NormalIn the debate over freedom versus control of the global network, China was largely correct, and the U.S. was wrong. Authored by a pair of law professors from Harvard and the University of Arizona, Jack Goldsmith and Andrew Keane Woods, the piece argued that the American and Chinese approaches to monitoring the Internet were already not that dissimilar: Constitutional and cultural differences mean that the private sector, rather than the federal and state governments, currently takes the lead in these practices… But the trend toward greater surveillance and speech control here, and toward the growing involvement of government, is undeniable and likely inexorable. 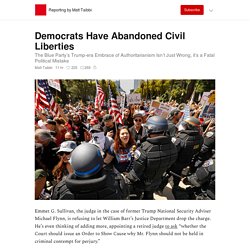 The cantankerous jurist is stoking opposition to the dismissal. He knows the law calls for him to accede to attorney general Bill Barr’s decision. But Barr can’t stop Sullivan from turning the dismissal into anti-Trump group therapy — and who knows, maybe the grieving Legal Left will figure out some way for the judge to convict Flynn despite DOJ’s retreat. Flynn’s counsel relates that on 24 prior occasions, Judge Sullivan has summarily refused to entertain input from non-parties to the case.

The Future Is Faction - Niskanen Center. Key Takeaways While moderates have had little to celebrate recently, they may have a rare opportunity to regain key footholds in the American political system. Building moderate factions within the two major parties is the best investment of time, energy, and money for those who want a more deliberative, entrepreneurial, and productive political system. However, this opportunity can be missed if moderate reformers devote their time to pointless democracy-reform do-goodism or quixotic third-partyism that does not build up a base of power in the two parties.

Within the parties, moderates will only get the power they desire by organizing as a coherent bloc, mobilizing moderate voters, and developing ideas to inspire their base and to provide opportunities for policy change. Introduction. Beware The Creeps Who Enjoy Their New Pandemic Power. Editor’s Note: did you know there is a special Kurt column on Wednesdays? A third per week! Sign up here to become a Townhall VIP member to get it. You'll also get exclusive access to his VIP podcast "Unredacted" The problem with people referring to this bizarre pandemic life limbo as “the new normal” is that there are people out there, both in and out of positions of responsibility, who are digging this opportunity to boss us around.

And it is troubling to see that there are a number of prominent folks who are in no hurry to curtail their ability to boss us around. Nobody Predicted COVID-19. COVID-19 caught lots of people in America by surprise. We shouldn’t pretend otherwise for cynical political gain. This morning, MSNBC’s Joe Scarborough claimed that, unlike the Trump administration, “Everybody saw this coming in early January.” The Immoral Campaign to “Abolish Billionaires” Culture In Which All Truth Is Relative Suddenly Concerned About Fake News. U.S. —Sources from within the United States confirmed Friday that American society, while typically rejecting concepts like absolute truth and objective moral standards, is suddenly showing grave concern for the rise of fabricated news stories after a reported uptick in fake news during the recent election season and President Trump’s habit of using the term to describe many mainstream media outlets.

Trump Impeachment: A Weaponized Investigation Used for Political Purposes. Analyzing the Newly Released 2018 FBI Homicide Data - The Meme Policeman. Video: Brett Kavanaugh and 'Justice on Trial' Democrats Can’t Take Their Own Medicine. What Would a Palestinian State Actually Look Like? What's Really Behind the Impeachment Con? The Democrats have become a cult of anti-personality. The ‘anti’ phenomenon is not unique. Past Democrat generations had built their identity around hating Goldwater, Nixon, and Reagan.

But the internet monetized the cult of anti-personality in a big way. And Democrats are paying the price. Speaker Nancy Pelosi and the Dem House leadership have tried everything possible to stop the talk of impeachment. It's official: Russiagate is this generation's WMD. Jonah Goldberg is ‘ideologically grounded, but I feel politically homeless’ (80) Life Liberty Mark Levin - Brandon Straka - FULL SCREEN - Fox News - 3/3/2019. The true cost of faked hate crimes. The Fall of the Media Temple. ‘There Is Going to Be a War Within the Party. We Are Going to Lean Into It.’ Attack of the Techno-Lynch Mob. Enlightenment Wars: Some Reflections on 'Enlightenment Now,' One Year Later. Trump's Right About California's Fires: It Wasn't Climate Change; Two New California Laws Prove It.

Is There Really an 'Insidious Libertarian-To-Alt-Right Pipeline'? Choose Sides? You Bet. But Antifa and Fascism Are the Same Side. On Finland, the United States, and the freedom of information and of the press. Obamacare? ... Trumpcare? ... Get Rid Of It All - Ron Paul Liberty Report. A Bipartisan Case for School Choice. Untitled. Cookies are Not Accepted - New York Times. Hard Truths about Health Care. Neil Gorsuch opposes the Kelo decision – a terrible Supreme Court property rights ruling that Donald Trump loves. Why Is Trump Waging War on the Freedom Caucus? - Foundation for Economic Education - Working for a free and prosperous world. Jane Austen claimed as a hero by America's 'alt-right' movement. ‘Truth Seeking, Democracy, and Freedom of Thought and Expression — A Statement by Robert P. George and Cornel West’

The "Amazon Effect" Is Creative Destruction at Its Finest. My dad predicted Trump in 1985 – it's not Orwell, he warned, it's Brave New World. The Problem With 'Fake News' Actually, Betsy DeVos is perfectly qualified to be Education Secretary. Tom Hiddleston on Taylor Swift, Heartbreak, and Great Bolognese. Confessions of a Catholic convert to capitalism. Potential nominee profile: Neil Gorsuch - SCOTUSblog. Antonin Scalia’s Textualist & Originalist.

Why I march for life: Column. Free Trade Doesn't Depend On Multilateralism. The Immorality of "America First" Economics.