Video : 10 Facts About Donald Trump. Article : Meet Donald J. Trump. Donald John Trump was born in New York City on June 14, 1946, to Frederick and Mary MacLeod Trump. As a teenager, Trump attended New York Military Academy, where he was an athlete and a student leader. His college years were spent at Fordham University, in the Bronx, and at the Wharton School, the business school at the University of Pennsylvania. After graduating from Wharton in 1968, Trump went to work for his father as a real-estate developer. Article : Donald Trump Biography - Facts, Childhood, Family Life & Achievements Of US President Elect. Audio : Biography of Donald Trump. Donald Trump - Wikipedia. 45th president of the United States Donald John Trump (born June 14, 1946) is the 45th and current president of the United States. 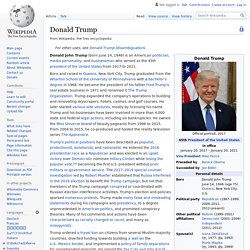 Before entering politics, he was a businessman and television personality. English to French Dictionary.