Donald Trump Criticized After He Appears to Mock Reporter Serge Kovaleski. Republican presidential candidate Donald Trump is under fire after he appeared to ridicule a reporter with a congenital joint condition that limits movement in his arms. 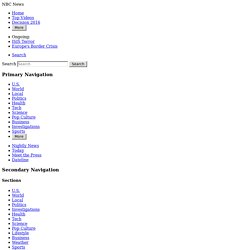 At a rally in South Carolina on Tuesday, Trump defended his widely discredited claim that thousands of Muslims in New Jersey cheered as the World Trade Center collapsed on Sept. 11, 2001. He then appeared to impersonate reporter Serge Kovaleski, one of the authors of a 2001 article in The Washington Post that referred to "a number of people who were allegedly seen celebrating the attacks. " "Now, the poor guy — you ought to see the guy: 'Uh, I don't know what I said. I don't remember,'" Trump said, as he contorted his arms in an apparent imitation of Kovaleski, who suffers from arthrogryposis. Kovaleski just a day earlier had told MSNBC's Steve Kornacki that he did "not recall anyone saying there were thousands, or even hundreds, of people celebrating. 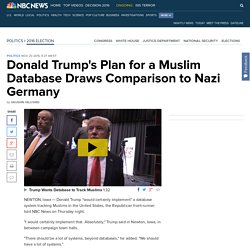 "I would certainly implement that. Absolutely," Trump said in Newton, Iowa, in between campaign town halls. "There should be a lot of systems, beyond databases," he added. "We should have a lot of systems. " When asked whether Muslims would be legally obligated to sign into the database, Trump responded, "They have to be — they have to be. " On Friday morning, Trump rival Jeb Bush called the comments "just wrong. " "You talk about internment, you talk about closing mosques, you talk about registering people. Hillary Clinton also denounced Trump's statement on Twitter. Ibrahim Hooper, national spokesman for the Council on American-Islamic Relations, sounded incredulous when he was asked about Trump's comments, telling NBC News: "We're kind of at a loss for words. " Trump Audience Member Yells Nazi Salute as Protester Removed From Las Vegas Rally.

This story has been updated. 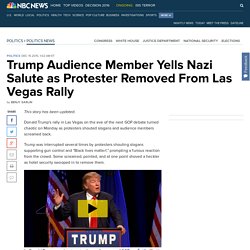 Donald Trump's rally in Las Vegas on the eve of the next GOP debate turned chaotic on Monday as protesters shouted slogans and audience members screamed back. Trump was interrupted several times by protesters shouting slogans supporting gun control and "Black lives matter! ," prompting a furious reaction from the crowd. Some screamed, pointed, and at one point shoved a heckler as hotel security swooped in to remove them. The first protests began after Trump invited Jamiel Shaw, a supporter, to the stage to recount how he lost his son after an undocumented immigrant gang member shot him while walking home.

As one man was dragged away, people in the crowd variously yelled, "Shoot him! " A large middle aged man shouted, "Sieg heil! " The man who was removed as remarks above were shouted, Ender Austin III, told Buzzfeed News he was upset about Trump's remarks towards Muslims, a group the candidate has proposed temporarily barring from entering the country. Why some conservatives say Donald Trump's talk is fascist. Most striking has been Trump's aim at Muslims in the United States. 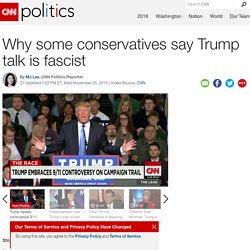 He's been widely denounced for claiming that people in New Jersey — a state with "large Arab populations," he said — cheered after the terrorist attacks of September 11, 2001. That, coupled with his seeming endorsement of a national registry to track Muslims in the country, has sparked a new level of condemnation from conservatives already on edge about Trump's endurance. "Trump is a fascist. And that's not a term I use loosely or often. But he's earned it," tweeted Max Boot, a conservative fellow at the Council on Foreign Relations who is advising Marco Rubio. "Forced federal registration of US citizens, based on religious identity, is fascism.

Conservative Iowa radio host Steve Deace, who has endorsed Ted Cruz, also used the "F" word last week: "If Obama proposed the same religion registry as Trump every conservative in the country would call it what it is -- creeping fascism. "