Trump's First 100 Days: Here Is What The President-Elect Wants To Do 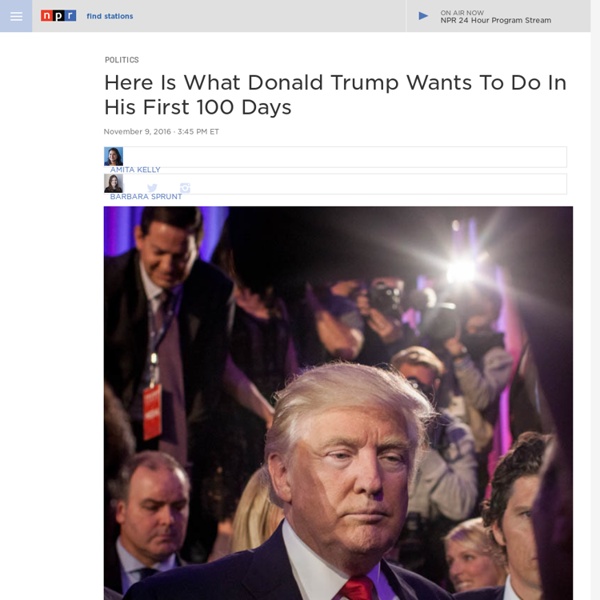 Liberalist|How to Make Sense of 2016 FOR a certain kind of liberal, 2016 stands as a rebuke. If you believe, as The Economist does, in open economies and open societies, where the free exchange of goods, capital, people and ideas is encouraged and where universal freedoms are protected from state abuse by the rule of law, then this has been a year of setbacks. Not just over Brexit and the election of Donald Trump, but also the tragedy of Syria, abandoned to its suffering, and widespread support—in Hungary, Poland and beyond—for “illiberal democracy”. As globalisation has become a slur, nationalism, and even authoritarianism, have flourished. In Turkey relief at the failure of a coup was overtaken by savage (and popular) reprisals. Faced with this litany, many liberals (of the free-market sort) have lost their nerve. Mill wheels In the past quarter-century liberalism has had it too easy. After so long in charge, liberals, of all people, should have seen the backlash coming. Liberals came up with a different answer.

WT|America now shunning news media after 2016 election Inaccuracies, melodrama, bias, outrage: Journalists showcased plenty during election night news coverage which proved to be intense — and endless. The phenomenon has taken a toll. The weary nation appears to be peeved at the press, and that includes Democrats and Republicans alike who are literally turning away. “As America deals with the fallout of the election, 27 percent of the country is actively trying to avoid the news. “Very few — 11 percent — say that reading or watching the news has put them in a good mood in recent days,” he adds, noting that 3 percent of the Democrats and 26 percent of Republicans agree. Which leaves America in a cranky state, at least for the time being. “My mother shared the story of a friend of hers, an elderly lady who lost her husband this year, who had been previously invited by extended family to share Thanksgiving with them in the Northeast. SEE ALSO: Christian florist, 71, takes appeal to Washington Supreme Court in gay marriage case

CNN|Hate crimes, racist graffiti after election; Trump says 'stop it' "They've been everywhere -- in schools, in places of business like Walmart, on the street," SPLC President Richard Cohen said. Critics accused Trump of fostering xenophobia and Islamophobia during the divisive presidential campaign. Recent days have witnessed ugly episodes of racist or anti-Semitic, pro-Trump graffiti along with threats or attacks against Muslims. The President-elect said he was "so saddened" to hear about vitriol hurled by some of his supporters against minorities. "If it helps, I will say this, and I will say right to the cameras: Stop it," Trump told CBS' "60 Minutes." Not all incidents are spurred by Trump supporters. The election-related incidents follow a year of heightened attacks against Muslim Americans. Overall, reported hate crimes spiked 6%, but the number could be higher because many incidents go unreported, Lynch said. Here's what some Americans are dealing with across the country: Mosques get letters calling for genocide 'Go home' scrawled on car New York Gov.

Violence flares in Washington during Trump inauguration By Jonathan Landay and Scott Malone WASHINGTON (Reuters) - America's political divisions turned violent on Washington's streets during U.S. President Donald Trump's inauguration on Friday, as black-clad anti-establishment activists set fires and clashed with police, while Trump supporters cheered the new chief executive. Hundreds of protesters with varying agendas marched through downtown, and some groups clashed with police, throwing rocks and bottles, which police responded to with tear gas and concussion grenades. At one flash point, a protester hurled an object through the passenger window of a police van, which sped away in reverse as demonstrators cheered. Multiple vehicles were set on fire, including a black limousine and a television truck. Police said at least 217 people were arrested and six officers were injured in scuffles with activists. Trump supporter Ryan Shiring, 21, stood nervously with a group of friends near a pile of smoldering trash cans. The U.S.